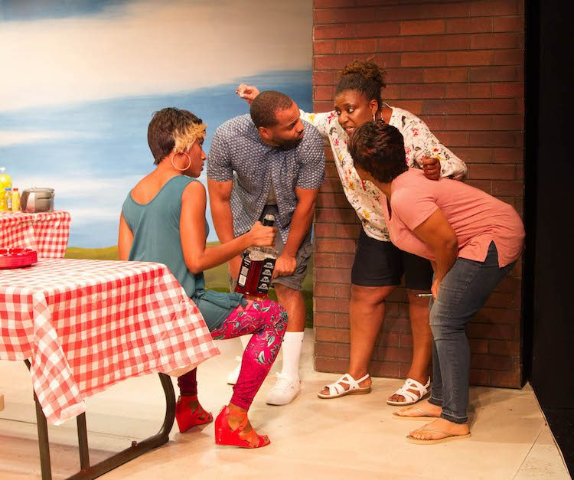 Robert O’Hara’s Barbecue is not a treatise on meat-grilling. It’s a satire that roasts our attitudes about race, class and money. It’s a funny, biting family story with a twisty, turny plot that never stops surprising you.

As I left the theater, I was thinking, How in the world am I going to write about this play? There’s almost nothing I can say that isn’t a spoiler.

Director Damon Kiely has assembled a biracial cast of eight actors for this Strawdog Theatre production and guides them smartly through a pop-culture pit of racial and celebrity politics.

During act one, the stage goes dark every 10 or 15 minutes. When the lights come up, the same characters are there, picking up where they left off. They’re dressed the same as the first four but this time they’re the other race.

The main thread of the story is that four siblings of the O’Mallery family—three sisters and a brother—have gotten together for a family barbecue in a park somewhere in middle America. They’ve invited their sister Barbara (Abby Pierce and Ginneh Thomas) for an intervention. They want her to agree to go into rehab because of her crack and drinking habits. Lillie Anne (Deanna Reed-Foster and Barbara Figgins), the ringleader, has picked out a rehab center 3000 miles away in Alaska, which features acupuncture, meditation, yoga, spiritual healing and “equine-assisted therapy.” Each of the siblings is to tell Barbara why they love her and want her to go into rehab.

Barbara is supposedly the one in need of intervention, but they all have problems. James T (John Henry Roberts and Terence Simons) drinks and smokes dope. Adlean (Kamille Dawkins and Kristin Collins) has breast cancer and smokes. And Marie (Celeste M. Cooper and Anita Deely) never gets far from the Jack Daniels bottle—and she may have crack in her purse.

In the first scene, as if to prove they’re white trash (or black trash), Adlean leaves her grandkids in the car and hollers at them to stay there, or “I’ll beat you till I see the white meat!” James T has a taser, just in case. And he doesn’t hesitate to use it. While waiting for Barbara to arrive, the others “decorate” the picnic pavilion so their sister will believe it’s really a party, drinking and smoking to get in the spirit.

I’m not going to spill any more details except to say that the rest of the play satirizes Hollywood casting decisions, memoir writers who deal in fiction, and reality TV.

Playwright O’Hara has been quoted as saying he’s seen enough TV shows about “white people doing shit.” Barbecue is about both black and white people doing shit. In the conversation in the playbill, dramaturg Taylor Barfield asks O’Hara, “… the truth of the matter is that these characters are fucked up. What is it about watching fucked-up people that we as Americans find so entertaining?” And O’Hara replies, “Well, why do you want to see people who are not fucked up? You want to watch people who are healthy and in control of their emotions? Why would I want to watch that? That’s not interesting.”

Barbecue is two hour (including an intermission)  of fast-moving action about pop culture, memoir writing, Hollywood casting and family dynamics. Scenic design is by Joanna Iwanicka with lighting by Jared Gooding and sound design by Heath Hays. Aly Renee Amidei is responsible for costume designs, which go up-market in act two.

The most recent of O’Hara’s plays, Barbecue premiered at the Public Theatre in New York in 2015. It was originally commissioned by Steppenwolf Theatre. Some of his other plays are Bootycandy, staged by Windy City Playhouse this year, Brave Blood, Antebellum and The Etiquette of Vigilance.

Barbecue by Strawdog Theatre Company continues at Steppenwolf’s 1700 Theatre, 1700 N. Halsted, through September 30. Performances are Friday-Sunday with $45 tickets on sale online or by calling 312-335-1650.