Mothers of the Bride by Meghan Maugeri 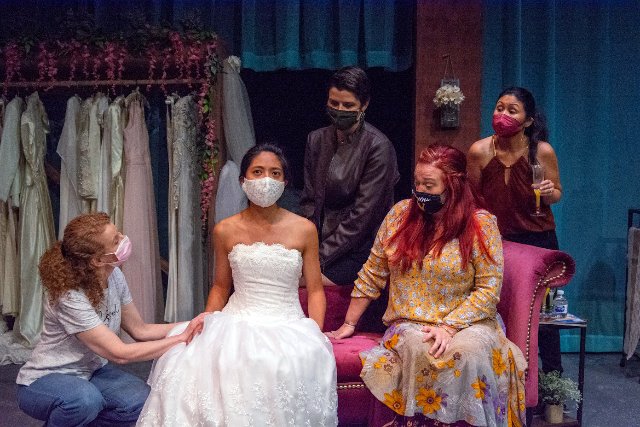 “Plus ça change, plus c’est la même chose” (French adage: The more things change, the more they remain the same.)

Many of the activities and anxieties associated with a bride-to-be’s preparation for her wedding have persisted across cultures and centuries.  Through most of history, those special moments have been shared between the fiancée and her mother.  In many ways, the key decisions are really intended to satisfy the mother rather than the daughter – a cause of much conflict.

Starting with the latter 20th century, divorce, remarriage, and nonmarriage have become so prominent that the would-be-bride may have several significant women to share these charged moments with.  Or maybe none.  Yet those same consternations go on, right down to the decision whether to go through with the wedding.

Playwright Meghan Maugeri has plumbed this territory with a well-written play.  The bride-to-be has to deal not only with her birth mother and her stepmom, but the groom’s birth mother and step mom insinuate themselves into the scene as well.  It’s kind of an all-female version of “Modern Family” visits the bridal shop to select a dress.  Of course, a great deal unrelated to the dress selection is revealed along the way.

Perhaps Maugeri’s strongest suit is in differentiating the five characters.  Francheska Loy is Hannah, the young victim.  Despite her success as a young adult, she lacks confidence in her abilities and her decision making.  Not true of her tiger birth mother Kristy, played by Kim Seipel.  Highly self-indulgent, she is also a realist who knows that her own failures and serial marriages haven’t exactly set a comforting example for Hannah.  Meanwhile, stepmom Beth, who is portrayed by Sandy Sodos, exudes optimism informed by her devout Christianity.  Kristy and Beth are oil and water, and there is nothing too insubstantial for them to disagree on.  Though in fairness, the friction comes mostly from one side, as it is usually the implacable Kristy who tries to douse the effusive Beth.

Enter Ginny, an unreconstructed hippy and mother of the groom, portrayed by Kaitlin Lawrence Papp.  As an arch feminist and iconoclast, she is the biggest misfit in the bridal proceedings, as she never even married the groom’s father and rails against many of the traditions associated with weddings.  Finally, there is Kalyn McKenzie’s Liv, the groom’s stepmom who appears without invitation.  Her shallow, social-media-obsessed vibe belies her achievement as an accomplished attorney.  A trophy wife who is barely older than Hannah, Liv seems more a peer to her rather than a surrogate parent.  To validate the casting in a way, the real actors, Francheska and Kalyn, just happen to be engaged!

The fivesome engage in fairly predictable exchanges, but with some humor along the way.  They can be appreciated as representations of women you know and hopefully like.  The play is not intended as a profound examination with deep meaning, but as a lighthearted slice of life.  It works on that level.

The most interesting element of critical examination concerns the affects of the players.  It is not clear whether the overall tone is driven by the actors themselves or by director Katie Hipol Garcia.  Nor is it clear whether their interpretation is in response to pandemic conditions or is how they see the play in any case.  So, to mention my specific concern, it is overacting with exaggerated gesticulation and constant high-volume, emotive verbalization.  Pear Theatre is a very small house, but the manner of communication used could serve a very large one.  And the somewhat unceasing madcap style doesn’t allow for the special bits to stand out.

But are there ever mitigating circumstances!  Because cast members have unvaccinated children, extra precautions applied.  This is the first play that I have seen since the re-emergence of live theater a couple of months ago in which the cast is fully masked.  We all know that much of our facial expression is hidden when wearing masks and that our voices are more muffled, so the desire to compensate is understandable.

The other aspect of masking the cast is that it is realistic.  “Mothers of the Bride” is not a historic play from Shakespeare or Tennessee Williams or whomever else.  It is a world premiere, debuting in the here and now during the pandemic.  Thus, it is a true time capsule.  If several women were meeting at a bridal shop in today’s real life, they would be masked.  Thus, the realism is compelling.

“Mothers of the Bride” a world premiere written by Meghan Maugeri is produced by Pear Theatre and plays on their stage at 1110 La Avenida; Mountain View, CA, through September 12, 2021.