Hansberry's Play Lingers in the Imagination and Sadly in Reality 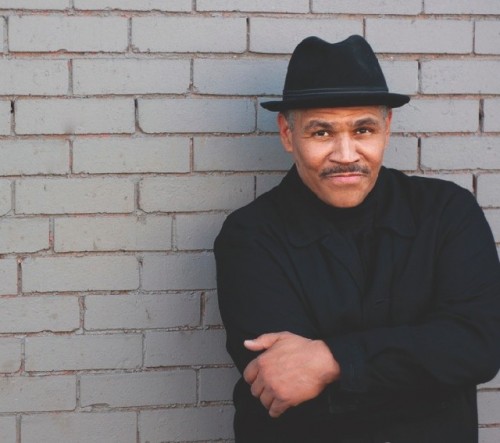 Ron OJ Parson, the director has looked at Raisin the the Sun from every angle and brought forth all its riches. 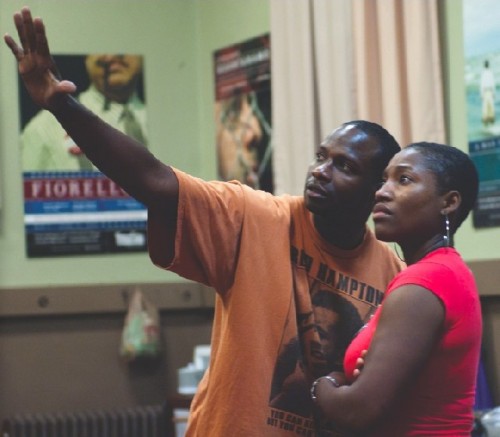 Rehearsing for the Future

Timeline takes brilliant advantage of its limitations to produce an irresistible staging of Lorraine Hansberry’s classic, A Raisin in the Sun.  The play takes place in a family living room.  We the audience are sitting there too, pressed up against the actors who seem more like family than stage presences as we join them.

The set by Brian Sidney Membridge USA is on the home level plumped with a comfortable chair and a sofa which serves as a bed for the young son of Walter, the play’s protagonist and antagonist, and also as his sister Beneatha’s courting cushion and liberation platform.

The ceiling is impressionistic. The orderliness of Mama’s house is reflected in a prominent rectangle; the out of kilter aspects in two rhomboids hugging the rectangle on either side.  Doors lead to Mama and Beneatha’s room, a closet where the ironing board, vacuum cleaner and roach spray are stuffed, and the apartment’s bathroom/front door.  A see-through curtain offers privacy to the play's one couple.

Only once at the play’s start do we hear the elevated train go by.  After that, we are locked inside, the only sounds, a door slamming, and an occasional blast of music when the needle is dropped on a 78.  Before the play comes out of the darkness, we are treated to the sounds of the times, beginning with the great crossover artist Elvis Presley’s You Ain’t Nothing But a Hounddog.

This being Timeline the play’s first iconic line “Eat Your Eggs” is softened by the smell of real butter cooking as it wafts across the living room and out into the theatre.  Ruth, played with delicate sensitivity by Toni Martin, cuts off her husband Walter’s dreams with the order to finish breakfast.  Her husband Walter is played by Jerod Haynes as a force of nature breaking through the family’s fears to unleash his passion in the form of a lucrative business.

The Youngers are, of course.  Originally A Raisin in the Sun was taken as a black Gentleman’s Agreement. Laura Z. Hobson’s book had been published over a decade earlier and showed how Jews had difficulty moving into white Wasp neighborhoods.  Hobson, also a female, wrote, when the protagonist remarked how bright a young woman he had met was,  ‘Why next thing you know women will be thinking.”

A decade later we find Beneatha, played with pizzazz and touching ambition by Mildred Marie Langford, ‘expressing’ herself about everything.  Her boyfriends represent the two pulls of the times: a wealthy young black man and a Nigerian student who advocates return to Africa.   They are fleshed out and individualized brilliantly by Justin James Farley in white shoes, and Daryl Satcher crying out “Africa.”

Ruth and Mama are tied to the idea of a physical home.  Walter and Beneatha both understand that home is where the heart is.  But Mama is determined to launch her grandson from his own backyard.

Karl Linder heads the new neighborhood's welcoming committee.  He is unbuttoned in the Younger home, but quickly buttons up his bottom coat button when his offers of a buyout are rejected.  Chris Rickett plays him with a prickly briskness.  He still seems more Massa than supplicant.

A delicate plant being coaxed to survive is the central image of A Raisin in the Sun, but raising a man in a female dominated household stands out today.

Greta Oglesby gives a memorable performance as the mother who leads, at first emasculating her son and then liberating him, by giving him a chance to fail at great expense to the family.  His failure and recovery also frees them to move forward.

The circumstances of this play are rooted in the south side of Chicago, from which the current governor of Massachusetts emerged after being swept off its mean streets.  He finished pre-college studies at a New England boarding school.  When he left for his first year, he brought a windbreaker to satisfy the ‘blazer’ requirement. Worlds of difference still remain.

The play is full of juicy scenes featuring what Langston Hughes called ‘'deferred dreams.’  It does not preach, but by presenting many different dilemmas teaches well in this compelling Timeline Production.