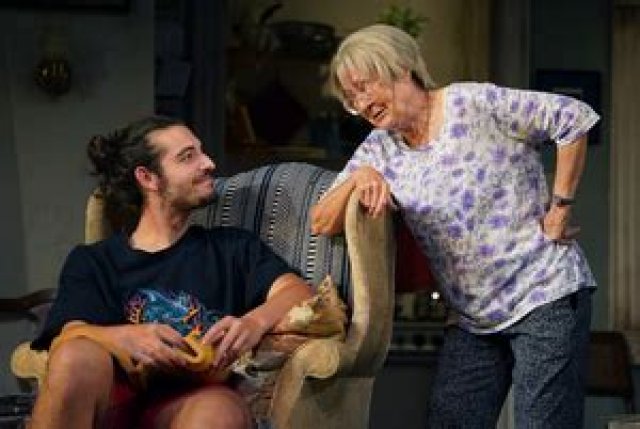 It is a joy to see two fine actors playing opposite each other and feeling the electricity. That is what you will see in 4000 Miles at Westport Country Playhouse through Sunday, Sept. 4.

The play by Amy Herzog focuses on the relationship between a nonagenarian grandmother and her adult grandson. Neither fits the stereotypical mold.

Leo (Singer) has been biking across the country and arrives at his grandmother’s NYC apartment at 3 a.m.  She’s his second choice for a place to stay; his girlfriend (perhaps his ex-girlfriend) won’t let him stay at her apartment. Vera (Dillon) is startled but offers him the spare bedroom. Nothing startling happens during Leo’s few days with Vera, except you gain a deeper understanding of these prickly characters. It is also bound to make you think about growing older, family and independence.

But what makes the play special is the relationship that often develops through the acting choices Singer and Dillon make.

Is this a great play? No, it is a well-constructed engaging play with some slips into obviousness. But you will be thinking about it long after you leave the theater.

To briefly sketch the characters. Vera is 91 and definitely showing signs of aging. Like many of us, she misplaces things and forgets things. She has lived alone for decades after her second husband died and is quick to accuse Leo if something is missing. But she also has a great backstory – a “leftie” who has marched and protested, had two marriages and possibly some lovers, and is fiercely independent.

In that way, Leo is the same. He has rejected college, is trying to cut the apron strings with his mother, is a committed environmentalist and has not yet figured out his way in life.  One might be tempted to say that he is “finding himself.” Yet he, too, is independent. He has biked cross country part of the way alone after his friend and riding companion was killed in an accident. each of them have some difficulty reaching out to others.

What Dillon and Singer do, is show these two for what they are – flaws and all. You can feel them gain a better understanding of themselves and each other and a growing affection between them.

Lea DiMarchi and Phoebe Holden play the two young women that briefly appear. DiMarchi is Bec, Leo’s girlfriend while Holden plays Amanda, a college student he meets and brings back to the apartment. These two characters don’t seem to add much except as representations of the spectrum Leo is stuck on. Bec is moving towards adulthood, which Leo is still avoiding, and Amanda is a typical well-to-do college student.

Arnulfo Maldonado has created a realistic NYC apartment in what is probably a building for limited-income seniors. Vera has lived there for years, and the clutter shows it. Maiko Matsushima has given each character appropriate costumes. Both the lighting by Carolina Ortiz Herrera and the sound by Fitz Patton are good.

Director Kennedy has brought out all of the themes of the play (there may be too many for a 100-minute work), and has avoided sentimentality. If I wanted to mention a flaw, it would be in Dillon’s movements. Her walk seemed odd in a way that kept calling attention to it and thus distracting me.