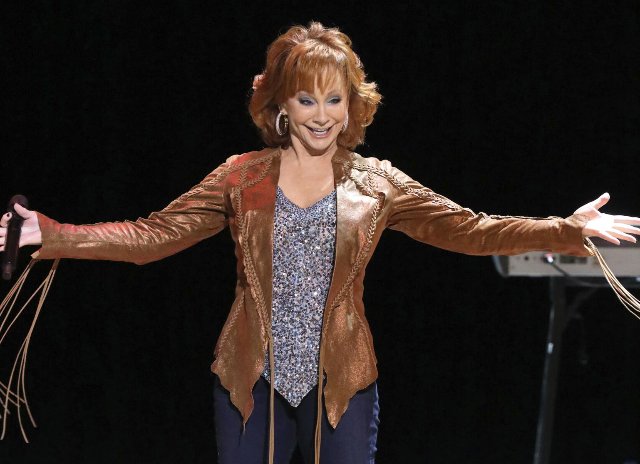 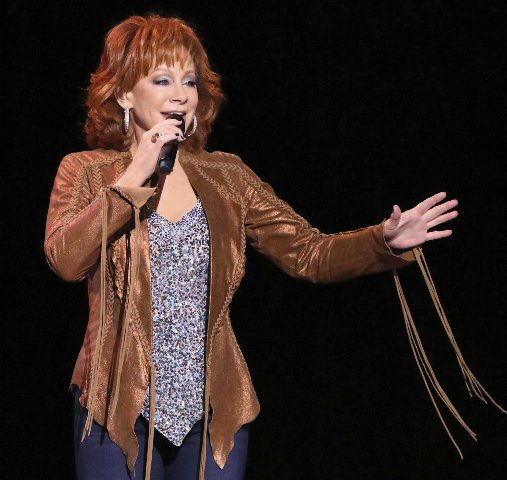 It’s a long way from McAlester, Oklahoma, population 18, to a packed Shed and lawn at Tanglewood.

“Seven of them were McEntires” she told the audience in an evening of stories woven through poignant songs of love, loss and lament.

Reba was born on March 28, 1955 to a bookkeeper/teacher mother and cattle rancher father. Both her father and grandfather were rodeo champions. She grew up with cowboys and competed in barrel races. Like her mother she seemed destined to be a small town teacher.

Singing the National Anthem at a major rodeo event, however, led to discovery and a  career launched in Nashville. It started slowly until eventually she found her own voice and style. Initially, she was influenced by others and sang in the traditional country manner. She evolved into what is today regarded as contemporary country. Losing the twang initally meant alienation from audiences. While retaining rural material today Nashville is the matrix for country and rock. Famed session musicians swing both ways.

Consider, for example, Bob Dylan's 1969 crossover album Nashville Skyline. Albums by other prominent folk and rock artists would follow suit as traditional country singers drifted closer to rock. That was richly evident in her Lenox performance.

McEntire  has recorded 29 studio albums, logged 42 number one singles, and 16 number one albums. Some 28 albums have been certified gold, platinum or multi-platinum. She  has sold more than 75 million records worldwide.

In 2019 she released her 29th studio album Stronger Than the Truth and in 2016 her first Gospel album Songs of Faith and Hope. Over 40 plus years in show business she has been a media presence with acting credits on TV, film, and Broadway, also earning Grammy’s and every known Country Music accolade.

For her first appearance at Tanglewood she commented on performing in “such a beautiful theatre.” From 4:20 PM to 5:45 PM yesterday the vast Shed morphed into The Grand Old Opry. Who knew that there were so many raucous country fans in the Berkshires?  Roll over Beethoven.

Between the lines one sensed art spawned by a hard life. That began at home when she and her sisters were expected to do chores alongside the cowboys then fix them three meals a day. That kind of male dominance carried over to a life in the music industry. It took decades to take charge of her recordings and career. Today she is a role model to other women in country music.

Roaming the vast Tanglewood stage with a powerful delivery she was in complete command of her performance. She was backed by a superb, kickass, Nashville band of nine musicians. There was the classic country touch of pedal steel guitar. Then two lead guitars and a woman on acoustic and violin. In addition to bass and drums there were two keyboard players. This is the band that recorded her recent albums. During introductions one of the guitar players hailed from nearby Springfield. It was evident that she has a strong New England fan base.

The set of fifteen songs began with “Turn on the Radio.” There were a lot of references to betrayal as “One Promise Too Late.” By the fourth number she covered “Respect.” Soon however she was asking that lover to come back. Betrayal and reconciliation threaded through the set.

Highlighting a 43-year career she described the decision to make a recent Gospel album. It’s the domain of her sister Susie so she asked for permission. There was old and new material on Songs of Faith and Hope from which she sang “Back to God.” Clearly it has been faith that helped her to prevail through hard times.

Taking a personal approach she asked the audience if anyone, like her, had been dumped? Who in their right mind would cheat on or dump Reba McIntire?  She fights back in a feisty manner demonstrated in the 2015 album Love Somebody and its single “She Ain’t Going Out Like That.” It conveys a woman who won’t stay home being all weepy and moaney. There are too many fish in the ocean. There were nice emotional accents of pedal steel as she sets out to find somebody.

There were hints of tough love as she introduced a song about her rodeo champion father. One connected with the pain of “Greatest Man I Never Knew.” It was heart wrenching when she sang “Greatest word I never heard/ Never said he loved me/ Guess he thought I knew.”

From 1997 “I’d Rather Ride Around with You” reached number two on the country charts.

A great challenge for performers is finding the right material. Early on those decisions were made by record companies and producers. Unhappy with material, and wanting to make her own decisions , she ended a long contract. That change entailed listening to endless songs. That can be frustrating on both ends.

The husband of Vicki Lawrence, songwriter Bobby Russell, approached every major country star with no luck. He finally stated that his wife could record his song and have a hit. Lawrence is best known for The Carol Burnett Show from 1967 to 1978. In 1972 they did just that and it shot to number one, her only such success. In 1991 “When the Lights Go Out in Georgia,” a gothic murder tale, was a minor hit for McIntire. There is a country tradition of grim but engaging songs.

Again returning to the theme of cheating and betrayal she performed a duet of “Does He Love You.” There were exchanges of rivals from opposite ends of the stage. Jennifer Wrinkle, a guitar/fiddle player, held her own as the other woman in a love triangle.

Nearing the end of the set McIntire promoted the new album Stronger Than Truth. The audience clapped along with an anthem “Freedom.” Isn’t that what we all are fighting for? Then another “Swing All Night Long With You.” That was followed by the title track “Stronger Than the Truth.” There were telling lyrics about it being stronger than whiskey and that there’s no sound as loud as silence.

In addition to a career as a singer she recalled her hardest gig. There were eight shows a week for eight months on Broadway for Annie Get Your Gun. From 2001 to 2006 she took a hiatus from touring to star in Reba a TV sitcom. She recalled it being great fun and sang its theme song “I’m a Survivor.”

On video screens flanking the stage there were clips from that show as well as other vintage performances. Some early video featured the big hair of country women. With humor she recalled that it entailed tons of spray. Yesterday we observed a more contemporary natural coif.

The misgivings of a young married woman are conveyed in “Is There Life Out There.” By now the audience was hanging on every note as she wound to an end with “Why Haven’t I Heard from You.” The song reached number five on the 1994 country charts.

At 5:35 PM with a wave to the audience she walked off stage.  Then the lights went out. There was applause but many headed for the exits. A full five minutes later she bounded back. There was a costume change to a provocative red sequined dress. Previously she wore a fringed leather jacket over pants and boots. This slinky transition was audacious for the matronly performer.

Because of a standing ovation it was hard to see her through the crowd clogging aisles. Security kept enthusiasts from charging the stage. By then we couldn’t get enough of Reba. The Tangleood season of 2019 came to an upbeat climax with “This Is Your One Chance Don’t Let Me Down.”