Thrown Stone Theatre in Ridgefield i 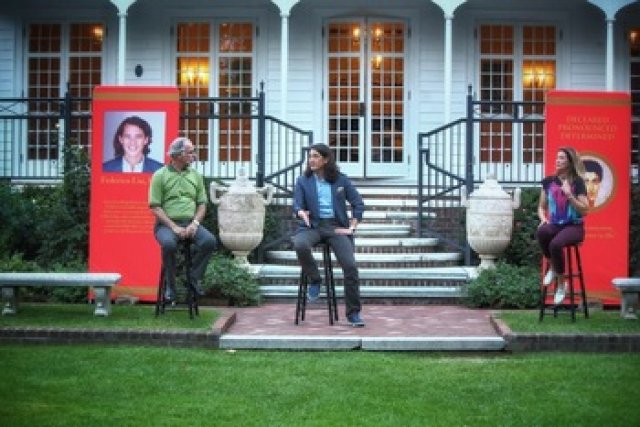 Good ideas and good intentions don’t always work out. The Suburbs, an evening of three short plays presented by Thrown Stone Theatre in Ridgefield is an example.

The intentions included presenting an outdoor production involving three Ridgefield landmarks. Another intension was to focus attention on how a town like Ridgefield – well-to-do and mostly white — exhibits bias to those that aren’t like themselves.

After all, Ridgefield is 88 percent white with one of the highest average income in the state.

But though well intentioned, the result doesn’t equal compelling theater or always illuminate the issues. At times the works seem more like first drafts then even semi-finished works.

The evening opens at Keeler Tavern’s garden (you have to carry your own chairs) where American Education: How to Confront the Classics by Catherine Yu is staged. The setup is supposedly a debate among two board of education members and a Princeton academic who grew up in Ridgefield as one of the few minorities. The topic of discussion – should the classics (Latin and classical literature) continue as part of the high school curriculum, be discarded, or be approached in different way.

It’s a weighty subject and the barely 20 minute play – I clocked it at 15 minutes – can only scratch the surface and present stereotypes. Ian Michael Minh is excellent as the scholar, Frederico but except for his hero worship of the Roman poet Terrence, who was African, we learn little about his views. The other two – Bob, an angry, middle-aged, white man who wants time to stop and Clarissa, a feminist who would throw it all out for more education in technology – barely can present even a sketch of the views.

And why set it in the garden of the Keeler Tavern Museum & History Center?

The performers are all good – Minh as Frederico, Bridgit Ann White as Clarissa and Will Jeffries as Bob. But they are given cardboard characters instead of real people.

After a two block walk, the audience arrives at the lawn of the Aldrich Contemporary Art Museum for The Caterers by Tony Menses. At least you can understand why a museum dedicated to recent art was chosen, since the play takes place sometime after 2030. We see the backstage area of an engagement party where the mostly minority wait staff come to collect trays, deposit dirty utensils and complain. They recognize that to the party attendees, they are invisible. Into this area shows up a young, white woman (Josephine) who allows everyone to assume she is a fill-in new server.

Yes, there are some laughs, and some mild surprises, but overall it is hard to see what Menses’ point really is. Too many of the characters are so undifferentiated that you can’t put a name to them, although names are listed in the program.

The highlight for this brief work (about 20 minutes) is the performance of Maya Carter as Garcia, who takes Josephine, played by Nell Kester under her wing.

The walk between the Aldrich and the next location is fairly long and at night it is dark. (Bring a flashlight if you don’t want to trip). You end at West Lake Inn (conveniently across the street from the parking area), a boutique hotel in a mid-19th century home.

Should We Dance Instead? by Phanésia Pharel might be considered a ghost story about the underground railroad stop that was in Ridgefield (or technically Ridgebury). It was run by Uncle Ned and his wife Betsey, two African-American residents. They hid the slaves on Ned’s Mountain before helping them move on. In the play, Uncle Ned returns to push a member of the Zoning Board to make part of the property on Ned’s Mountain an historic site. The property is apparently really is for sale for millions. We see memories of the past. Tenisi Davis gives a fine performance as Ned with Nedro Snipes as his wife.

If the intent was to encourage Ridgefield residents to think about their privileged lives and those who make it possible, The Suburbs may have accomplished its goal. If the intent was compelling theater, the three pieces didn’t add up to a worthwhile whole.

The Suburbs runs through Sunday, Sept. 5. For information visit https://thrownstone.org/