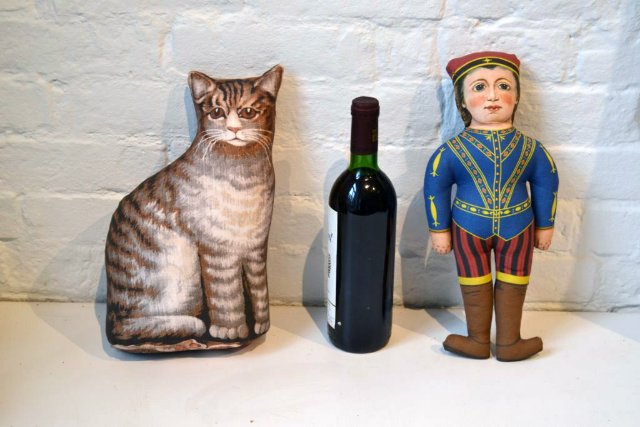 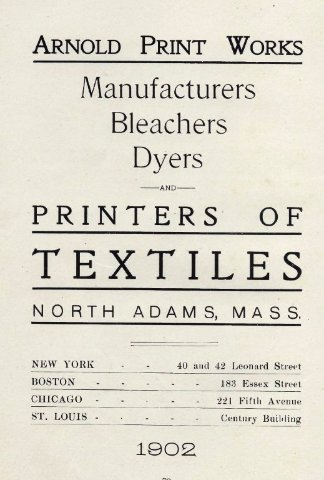 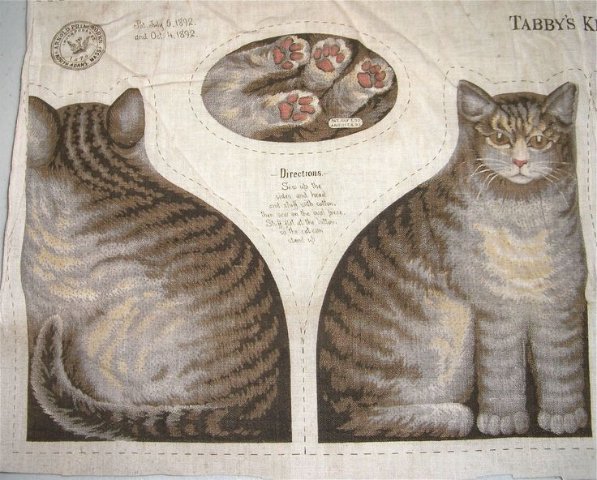 The cat pattern could be cut out stitched and stuffed to make an inexpensive doll. 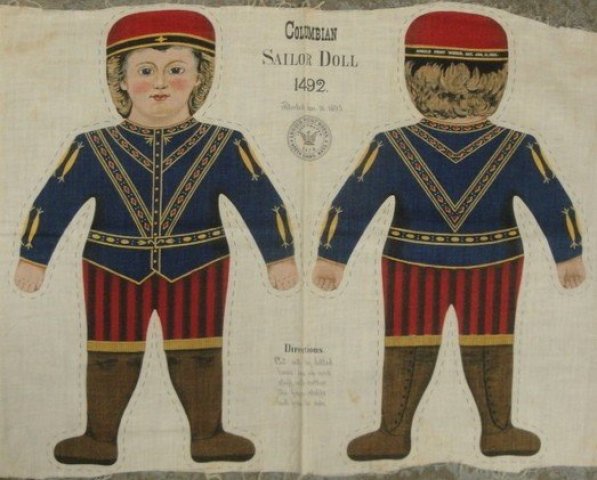 This is what the Arnold Print Works looked like around 1900.  It had an international reputation. It was huge!  You can see the Hoosac River in the foreground and the still standing Clock Tower in the center.  Arnold Print Works thrived during the Civil War, but the textile industry was changing.  The world wasn’t as interested in the same fabrics and patterns in the 1870s, so Arnold imported Italian Artisans to better compete.  That worked for a while, but an economic depression required new investors and leaders and more attractive products.

In my opinion, it was the Smith Partners from Ithaca, NY that saved the day.  Celia Smith and her sister-in-law Charity Smith had been sending letters to the Arnold Print Works requesting a meeting for their New Idea – Printed Cloth Dolls.  They never received a reply, so with a Sample Doll in hand, they made the trip to North Adams in 1890, but were turned away at the door.  They were told that Arnold Prints Fine Fabrics for Curtains, Clothing and Upholstery and that They Don’t Make Dolls!

The Smiths made this same trip a couple more times and finally, the Business Manager agreed to hear them out.  Celia told the Manager that they would just take the Cotton Scraps and design Animal Dolls on them.   Dogs, Cats, Monkeys and Rabbits were some of the first designs.  The Smiths took their pile of Scrap Doll Designs back home to Ithaca where they cut out a few of the Designs as Samples and stuffed them with Rags and Dried Corn Cobs.

Their plan was to just Sell the Front and Back Animal Designs on the 12” x 16” Cotton Sheets.  The stuffing and the stitching was up to the Buyers.  They took these 20 Doll Samples to their Church Fair and sold out in less than an hour at the price of 10 Cents each.  Feeling confident, the Smiths organized another day at the Arnold Print Works and produced another 20 Dolls Sheets and then another 20.  Back in Thompkins County, they quickly sold out at other Church Fairs.

By this time, the Arnold Business Manager was impressed.   Instead of using Cotton Scraps, he allocated a Full Roll of the Cotton Fabric as had just been delivered from the nearby Eclipse Cotton Mill.  He had Celia and Charity paint the outlines of the various Animals and had his Italian Artisans paint the bodies and details.  Hundreds of Doll Sheets were produced and this time, it was the Arnold Salesmen who took them to various Stores where strong interest was evident.  The Dog and Cat Doll Sheets Sold Out Quickly at 20 Cents each.  The demand was so strong that the Animal Patterns could no longer be made by hand, but required Arnold’s Lithographic Printers.  Arnold Print Works agreed to Buy the Partners’ Patented Designs and they negotiated Royalties at 10 Cents per Printed Fabric Yard.  Showrooms for the Arnold Print Works Dolls were established in New York City, Boston and Chicago.  In the 1892 Holiday Season, 200,000 Doll Sheets were Sold.  In 1893, these Arnold Print Works Dolls were a feature at the Chicago World’s Fair. This demand continued until around 1920.  Arnold was making money!  Celia and Charity were making money!  What was going on?

The background parallel story to this success has a curious Northern Berkshire Connection.

[The 20 Cents sounds cheap today, but the Child Workers who manufactured the fabric in the Eclipse Cotton Mill couldn’t afford to Buy an Arnold Print Works Doll Sheet.]

In 1831, 20 year old Edward Cabot Clark graduated from Williams College in Williamstown, MA.  Clark then went on to study Law with Ambrose L. Jordan in Hudson, NY.  Clark became a Partner and moved the law firm to New York City where it became one of the most prestigious.  One day, in 1849, a NY Actor turned Inventor with no money named Issac Singer was directed to take his Sewing Machine Invention to Attorney Edward Clark.  It is clear that Clark sensed a huge market opportunity for Singer’s Sewing Machine, so agreed to do the legal work for around a 30% interest in the Singer Sewing Machine Company.

Several Patents needed to be filed and defended, as other Sewing Machines were beginning to enter the marketplace.  One of the most significant contributions to the future success of the Singer Sewing Machine Company was Clark’s structure of America’s First Consumer Installment Plan in 1856.  While there were Industrial Sewing Machines being manufactured by the likes of Hunter Machine Company in North Adams, Singer’s Sewing Machines were designed for the Homemaker.  Even so, they were priced at around $100, which was way beyond most household budgets at that time.  Breaking the Payments down to $5 per month meant that Many Thousands of Households could now own a Singer.

Over time, a Singer Sewing Machine Store could be found in most cities in the USA as well as in Europe and Turkey.  More than 20,000 Singers were being Sold in a year.  While it took the average Sewer 4 days to make a Dress by hand, it now could be made in a few hours.  That’s where the matchup with the Arnold Print Works Dolls came in.   With the extra time, Women were looking for other things to make with their new Singers.  Stuffing and Stitching the Arnold Dolls became a passion for many around the world.  Arnold Print Works opened showrooms in Berlin, London and Saint Petersburg.

By the early 1900s, 3 Million Singers were being sold each year.  Attorney Edward Clark became very wealthy.  The Clark Building on the Williams College Campus and The Clark Art Institute are some of the Regional Benefits in our time.   The Singer Sewing Machine Company went through many changes.  By 1900, it had 90% of the Global Market.  It became a $Billion Public Company and then was split up.  It still exists today and you can connect your Singer to your Computer.

The Arnold Print Works found itself in financial failure mode again.  This time during WWI.  The Wartime Tents and Clothing were being manufactured elsewhere and the market had lost interest in Folksy Dolls.  Arnold moved out of their Marshall Street Campus and moved to Adams.  Originals, Reproductions and Fake Dolls and Sheets can sometimes be found at Lawn Sales in The Berkshires.  They are also For Sale on various Internet Sites including Etsy, Craigslist, eBay and Ruby Lane.  The reality is that serious Doll Collectors around the World want an Original Arnold for their Collections, so there is continued interest to this day.   Fortunately, for many of the hundreds of the let go Arnold Workers, they found new jobs making Capacitors for the New Owners of their Campus – Sprague Electric.   After Sprague failed and exited this Campus – MASS MoCA became the next occupant in 1999.

BRILL GALLERY PRODUCTIONS has Reproduced the Cat and Sailor Boy Arnold Print Works Dolls from Original Drawings.  These Dolls have been Stuffed and Sewn by Local Artisans.  We have Sold some to Museums and Collectors.  A few of the Cat and Sailor Boy Stuffed and Sewn Dolls are still available for $70 each plus Tax and Shipping.   A few of the Sailor Boy Unstuffed Sheets (like were Sold by Arnold) are also available at $40 each.  A clear note on each Doll notes that they are Reproductions.  Please Email if interested.