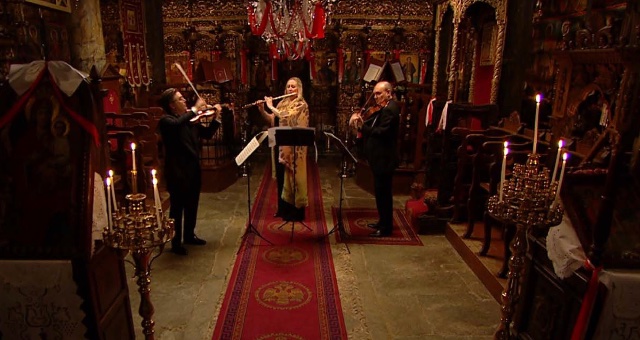 Chamber Music Society musicians at the Church of Pammegiston Taxiarchon; courtesy of Live From Lincoln Center

Pictured: The Temple of Apollo, Delphi; courtesy of Live From Lincoln Center

The Chamber Music Society of Lincoln Center is upward bound, on an odyssey filmed by Live From Lincoln Center as they journeyed through Greece.  We visit the remote hills of Pelion and churches in Volos and Milies.

Unusual and exotic locations are the setting for performances from a Bach violin solo by Aaron Boyd,  performed in a magnificent amphitheater on to the wonderful Octet for strings that Mendelssohn composed at 16 years of age as he embarked on his classical career. The performance was set in the Stavros Niarchos Foundation Cultural Center, a gift to the Greek people.

Boyd is compelling in his choice of tempi, phrasing and dynamics.

The Mendelssohn performance is perfection.  Perhaps inspired by a passage from J.W. Goethe’s Faust, “Wisps of cloud and mist/Are lit from above/Breeze in the foliage and wind in the reedsAnd all is scattered,” it has an unusually mature exuberance.  The spirit of the broadcast is captured in the excitement and energy of the string players. The doubled strings are not two choirs, but rather communicate to form an orchestral sound in texture and gesture. The filigree writing is fun.  It provides amazing moments on the Niarchos Foundation stage.

We did not see enough of the Renzo Piano structure.  Accustomed to his exterior additions to the Art Institute in Chicago and the Morgan Library in New York, and also the Whitney Museum, tightly held by the  HighLine in New York, seeing his work displayed in a large open space was revealing.  The building is very much Piano, but suggests, given the opportunity, that the architect is a master of open space.

Interspersed with scenic vistas were a delightful trio for flute, violin and viola, performed with exquisite grace and fun by Boyd, joined now by Tara Helen O’Connor on the flute and Paul Neubauer on the viola.  O’Connor has one of the most pure tones imaginable, and Neubauer a delicious sense of accuracy and humor.  Two decorative notes which ended phrases were played for amusement as they passed from one instrumentalist to another.

George Tsontakis an American composer of Greek descent, was represented by a duet on violin and viola performed by Boyd and Neubauer.  This work offered some urban raggedness and shrill notes, but overall had a beauty that the composer honors, even when he is challenged to mimic Stockhausen. The violin and viola keep an intriguing conversation going, Greek sounds drifting in and out of focus.

O’Connor makes us think of Pan, and sure enough she performs a solo from Debussy’s Syrinx, in which Pan makes a musical instrument of grass stalks.  O’Connor creates a sensual jewel of this miniature.

Live from Lincoln Center:Odyssey broadcast on September 6 on PBS.  Streaming for 28 days after the broadcast.