The Rothschilds at Stage Door Theatre

Through October 16 in Margate, Florida 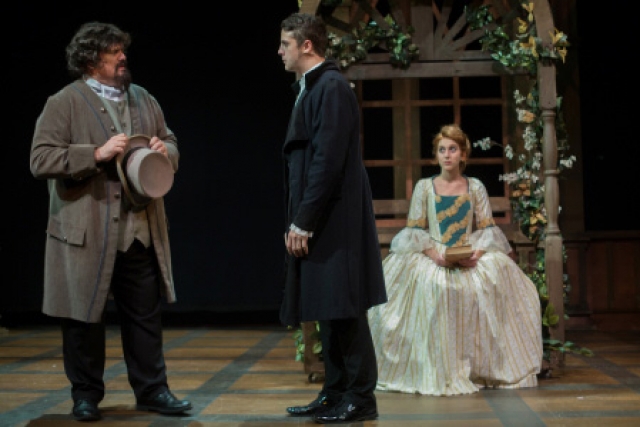 A recording of “The Impossible Dream” played before the start of a recent performance of the musical “The Rothschilds,” which is receiving a mostly commendable production through Oct. 16 at Stage Door Theater to open its new season.

“The Rothschilds” is based on a real-life European family whose members established a powerhouse banking operation and secured rights for their fellow Jews during a time of anti-Semitism in late 18th century Europe. Family members faced boulder-size odds throughout their efforts, making their dream seem impossible.

Those obstacles included Napoleon and powerful heads of state. Each were Goliaths to the Rothschilds’ Davids. Before the Rothschilds became a famous, wealthy banking family and branched out into other operations, they were poor Jews living in a Frankfurt Ghetto.

Despite restrictions imposed on Jews that bring to mind the Holocaust, the family displayed admirable boldness. If you were on a quest and the odds were stacked heavily against you, you’d want none other than family patriarch Mayer Rothschild, as played here by Matthew William Chizever, leading you.

The actor radiates such contagious, boundless optimism and dogged determination as Mayer, you’d believe him if he told you he’d achieve world peace. Chizever’s Mayer is a proud. resourceful man, an individual who carries the Rothschild family name like a badge of honor. Fortunately, the actor never makes his character seem arrogant or greedy.

“The Rothschilds” is a so-called “rags to riches” story. These are generally feel-good, empowering tales made even more touching when the beneficiaries of the riches are likable. In “The Rothschilds” which never gets too sentimental, strong conflict along the road to wealth adds palpable tension, making us pull for the family even more.

The family’s resolve becomes apparent as soon as Mayer’s sons, as pre-teens, are put to work in his shop. The poised young actors playing the children hold themselves high and convey maturity, politeness and honor while working.

“The Rothschilds” was the last collaboration between Jerry Bock (music) and Sheldon Harnick (lyrics), the same duo who brought us, among other shows, the more successful and compelling “Fiddler on the Roof.”

There are notable comparisons between the two shows. Like “Fiddler,” “The Rothschilds” tells a relatable, human tale. But the story contains a complex plot that’s not always easy to follow. The musical feels like a dry, overloaded history and financial lesson at times; you might find yourself lost or bored at points.

The songs in “The Rothschilds” help establish mood, deepen emotion and contain some clever lyrics. As a whole, though, the score isn’t nearly as memorable as “Fiddler’s.”

The performers, who mostly boast strong, expressive voices, make the most of the music. A live orchestra would create a richer sound than the track used in this production. Live theater calls for live elements and that includes an orchestra.

There were sound problems during a recent performance. The microphones didn’t always work and we heard grating feedback. From an up-close seat, the microphones are too visible. It makes us feel like we’re watching actors, not real people (why must actors wear mics anyway? Whatever happened to projecting your voice out into the back row)?

Meredith Bartmon as Mayer’s wife, Gutele, is particularly affecting at the close of act one. At the time, she’s torn between trusting her husband’s decision to send their sons out on missions across Europe and fearing for their safety. An unsure, pained expression is etched on Bartmon’s face and authentic-sounding vulnerability emanates from her voice. The number ends with Bartmon’s Gutele casting a wary but reluctantly trusting glance at her husband.

Bartmon captures Gutele’s vulnerability and is equally adept at conveying her strong-willed personality and inner strength.

Director Loewy creates touching stage pictures that clearly show Gutele and Mayer have been a loving couple for a long time.

In a multifaceted performance, Chizever’s Mayer is loving and tender. But he also shouts thunderously at times, leaving no doubt that Mayer’s the man of the family, not unlike “Fiddler’s” Tevye.

As the production progresses, Chizever convincingly moves with less energy and pep. It becomes clear he’s slowing down, and will soon have to turn the Rothschild operation to his sons.

Among the sons as adults, Alexander Zenoz shines brightest as Nathan, the leader of the brothers. Zenoz imbues the character with a charming and boyish demeanor that endears us to him. But at appropriate times, he also conveys an unflappable confidence and doggedness. These qualities serve him well when he’s matched up against, say, Prince Metternich (a snobby, spiteful Troy Stanley, who skillfully transitions between multiple roles).

Contrasts exist in “The Rothschilds” and this production honors them. Pitch blackness upstage symbolizes the dreary existence of the ghetto. Tall, stately and brighter gates further downstage can symbolize the bright future of the Rothschild family or the elegant lifestyles of the royalty in the musical.

Costume-wise, the heads of state and royalty are outfitted in fanciful period, attractive attire, compared to modest dark suits worn by the Rothschild family members (the costume designer is Larry Baumann). In one scene, all of the adult sons except Nathan wear a skullcap, which seems odd.

Ardean Landhuis makes clever use of his mood-enhancing lighting, such as when each of the Rothschild boys are born. As the announcement of each birth is made, a light shines, suggesting a bright moment.

Such bright moments are in stark contrast to others, such as the ghetto town-crier’s haunting monotone announcing curfew for the Jews. Smoke rises and darkness overtakes the stage, leaving us with a foreboding feeling.

“The Rothschilds” might be a poor man’s “Fiddler on the Roof,” but themes of family, honor, dignity, perseverance and materialism pitted against simple happiness resonate with many.

Performances by actors such as Chizever and Zenoz make this production compelling theater.