The Impracticality of Modern-Day Mastodons 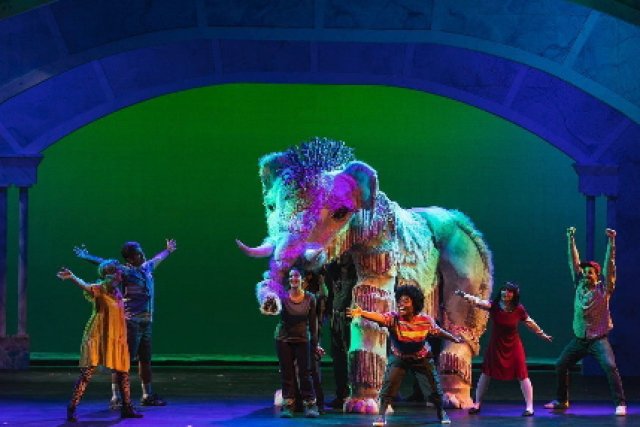 Photo by Morgan Sophia Photography Jess the Mastodon and her human friends coexist in Rachel Teagle's new play, The Impracticality of Modern-Day Mastodons. 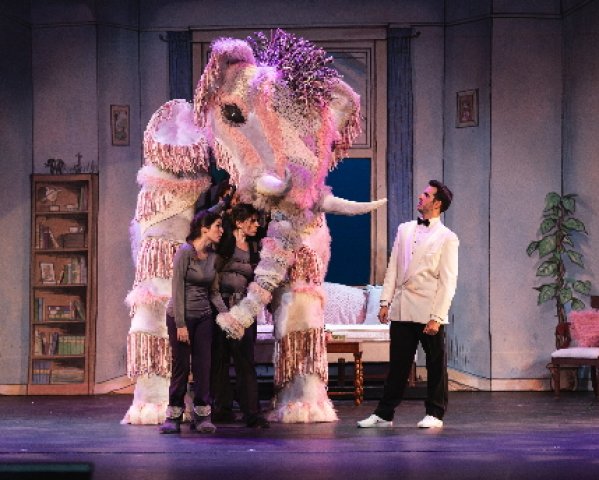 Photo by Morgan Sophia Photography Here is a scene from Theatre Lab's world premiere production of The Impracticality of Modern-Day Mastodons.

Our roughly nine-and-a-half-foot tall heroine lumbers across the stage. Then, she settles into a chair in a vocational advisor’s office. Not long after, she accepts the advisor’s offer of a mint, retrieving it with her trunk.

The protagonist, a Mastodon (a large, extinct, elephant-like mammal), is the central character in a play that might widen a toddler’s eyes and delight children a couple years older. But make no mistake; award-winning playwright Rachel Teagle obviously also had older children and grown-ups in mind when she penned The Impracticality of Modern-Day Mastodons.

While the imaginative, sometimes humorous piece features visual eye candy and attention-grabbing sound effects, the play also deals with mature themes. They include purpose, belonging, finding and being your authentic self, tolerance of differences, and the importance of dreams.

Under director Matt Stabile’s guidance, the vivacious cast. whose members are funny while remaining true to their characters, finds the right mix of child-like playfulness and seriousness. The cast members’ exuberance has the energizing effect of Red Bull. Of course, let’s not forget the seeming effortlessness with which the puppeteers maneuver the Mastodon puppet that long- time and respected puppet designer Jim Hammond created.

Theatre Lab’s production of The Impracticality of Modern-Day Mastodons is part of the company’s “Heckscher Theatre for Families” series. The shows in this series “are meant to inspire the hearts and imaginations of audience members of all ages and to provide high-quality live theater that is accessible to everyone.”

While committed characters such as Jess can inspire, Teagle apparently also had other goals in mind for her audiences. For example, this play shares an objective with the Stephen Sondheim/James Lapine musical, Into the Woods. As you may recall, that musical does not end with its fairy tale characters living happily ever after. Instead, they must contend with the consequences of their actions and desires once those wishes came true.

Meanwhile, in Teagle’s play, the world reaches a moment when everybody’s biggest dreams have suddenly come to pass. Those wishing to become princesses have lived to see their wish come true. Ditto for astronaut enthusiasts.

“OK, so now what?” Teagle seems to ask. “Will everybody suddenly experience a carefree life in a Camelot-like existence?”

That is not the case for the characters in The Impracticality of Modern-Day Mastodons. For instance, what is Jess to do now that she’s a Mastodon living in 2021? Is there a place or occupation for the likes of her? And what about her boyfriend, Clarence? He grew disappointed because something didn’t go his way. As a result, he abandoned his initial dream of becoming a journalist. But his fervent dream to become a super spy came true, changing his name to Clint. However, he finds that the job is not all glamor and romance.

While Into the Woods and Mastodons might remind us to “be careful what you wish for,” the latter piece also encourages us to embrace differences. No, not every little girl dreams of becoming a princess. We might meet someone like Jess, whose most fervent desire is to become a Mastodon. Of course, messages of tolerance are welcome and even necessary today, when oftentimes, people don’t think twice about hurling insults or worse at each other.

But Teagle doesn’t preach or hammer us on the head with such a message. Rather, the playwright imparts information and relays messages with the patience of an enthusiastic and playful kindergarten teacher who has taught slow-learning pupils for decades. In fact, sometimes such a demeanor comes across through the performers’ acting choices. At times, they are broad, in a “hey kids, let’s put on a show!” vein. But that’s not to say such choices are inappropriate here. After all, the “Heckscher Theatre for Families” series aims to cater to audiences of all ages, including little ones. So, if this cast succeeds in entertaining and/or enlightening a child who, through this show, is receiving her first taste of live theater, that youngster might become a lifelong theatergoer.

Much of the playful and broad acting comes when the characters, as part of a chorus, educate audiences about, for instance, Mastodons. During one such scene, we learn why Jess wanted to be a Mastodon when she grew up. But I also wanted to know what her parents and friends thought about her wish. Did she even tell anyone?

In this production, the magic is clearly visible. Specifically, we see the puppeteers at work, maneuvering Hammond’s creation. Also, Gaby Tortoledo, who portrays Jess, is never hidden under the Mastodon. But while the magic may be visible, it’s no less impressive. Surely, it must take hard work to maneuver the puppet. On opening night, the puppeteers deftly pulled it off, keeping the puppet moving as smoothly as possible.

Acting wise, Tortoledo imbues Jess with believable ambition, wide-eyed curiosity, and assertiveness. The performer makes us root for her character as she tries to find her place in a new world. Except for Tortoledo, the performers portray more than one character. They do so with impressive skill, seamlessly moving from one character to another.

In addition to Tortoledo, cast standouts are Irene Adjan as a playful and charming vocational adviser, an expressive and animated Rachel Michelle Bryant in a variety of roles, Niki Fridh, who invests her characters with a mysterious, seductive air, Daniel Llaca as a suave secret agent, and an energetic Carlos Alayeto.

Under Stabile’s direction, the pacing is fluid and never lags. However, during an early scene, the dialogue doesn’t sound spontaneous. Responses come too quickly, and sound rehearsed. Also, Stabile stages an early scene too far upstage; downstage would have been more prominent.

In the final analysis, this production is a triumph, partly due to the “behind the scenes” folks.  They include lighting designer Thomas Shorrock, who uses colors wisely to reinforce a nonrealistic aura. Similarly, Matt Corey’s sound design includes music that suggests fantasy, while videographer William Smyth’s use of shadows further reinforces a make-believe, mysterious atmosphere.

But there’s no mystery as to what makes this play and production a success. The playwright and those working on this production, on-stage and behind-the-scenes, seek to entertain the youngest audience members, while providing enough substance for older patrons.

Theatre Lab’s world premiere production of Rachel Teagle’s comic-fantasy The Impracticality of Modern Day Mastodons runs through Sept. 19 at the Florida Atlantic University Boca Raton Campus’ University Theatre, 777 Glades Road, Boca Raton. For specific directions, go to https://www.fau.edu/artsandletters/university-theatre. Tickets cost $25 for adults (up to four children free with an adult ticket). Showtimes are 2 p.m. and 7 p.m. on Saturdays, as well as 3 p.m. on Sundays. To watch a trailer, go to https://www.youtube.com/watch?v=Vpd2WYEb2Yk. And to buy tickets, go to https://fauevents.universitytickets.com/w/event.aspx?SeriesID=338. Theatre Lab’s phone number is (561) 297-6124.