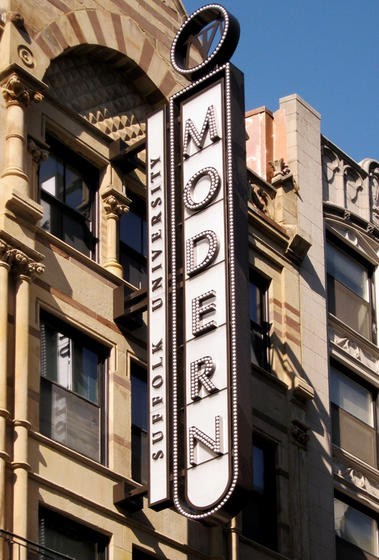 The Modern Theatre at Suffolk University announces the programming lineup for its fall 2013 season, featuring innovative performances of dance, opera, and new and classic plays.

THE SEAGULL
By Anton Chekhov; adapted and directed by Robert Kropf; presented by Harbor Stage Company

Harbor Stage makes its Boston debut with Artistic Director Kropf's adaptation of Chekhov's beloved classic. An achingly human investigation of art, love and the struggle to endure, the play examines the lives and liaisons of a group of family friends on holiday at a lakeside estate. This production comes to Suffolk University’s Modern Theatre after a successful run on Cape Cod, hailed by the Boston Globe as “piercing…stiletto sharp…another milestone.” The cast features Suffolk alumnus and Elliot Norton Award-winner Alex Pollock.

6 p.m. Wednesday, Sept. 25
Author Art Singer will lead a fascinating journey into Boston’s film and movie house past. This event offers a chronological history of Boston’s theaters and their evolution in the city. Through rare images and fascinating stories, Singer will discuss the historic role of the Modern Theatre and its owner Jacob Lourie, the five Movie Palaces included in his book of the same name, and how several Boston theaters were saved and restored. The program will be followed by an interactive audience discussion and book signing with Singer.

IN BETWEEN
A one-man show written and directed by Ibrahim Miari
7 p.m. Thursday, Sept. 26
In Between is a semi-autobiographical one man show that portrays the complexities and contradictions inherent in Palestinian-Israeli identity. On the precipice between two cultures stands Miari, son of a Palestinian Muslim father and Jewish Israeli mother. An interrogation by Israeli airport security sets the scene for recollections of his childhood in Acco, memories of his Jewish and Palestinian grandmothers and of war. Questions surrounding his identity become even further complicated by his imminent marriage to a Jewish-American woman. Miari is a Suffolk University Distinguished Visiting Scholar.

MARIE-ANTOINETTE, IN HER OWN WORDS

By Evelyne Lever, based on the letters of Marie-Antoinette; directed by Katherine Adamov; starring Barbara Schulz; presented by the French Theatrical Foundation
Oct. 18-20
Centuries after her death, Marie-Antoinette remains one of the most compelling and talked-about women in the world. Discover the inner life of this misunderstood icon in a one-woman show, as Molière Award-winning actress Schulz takes the audience on the monarch’s fascinating journey from teenage bride in an arranged marriage to desperate and broken queen, hours before her execution. This is a vivid portrayal of this legendary figure written by French historian Lever, using Marie-Antoinette’s personal letters, in French with English supertitles.

Suffolk University welcomes back the Casa Patas Ensemble, Madrid’s premiere presenters of flamenco and flamenco fusion, for an exhilarating night of dance and music.

Jan. 25-26
Intermezzo presents the world premiere opera about the trial for heresy of the charismatic Anne Hutchinson, who struggled for religious freedom despite the persecution of Massachusetts Bay Colony Governor John Winthrop and his ministers.

Tickets are available online at www.moderntheatre.com or by calling 800-440-7654. Show times and prices vary. The Modern Theatre at Suffolk University is located at 525 Washington St. in Downtown Boston.