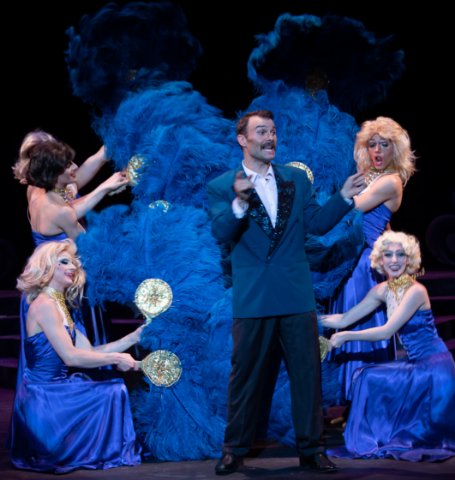 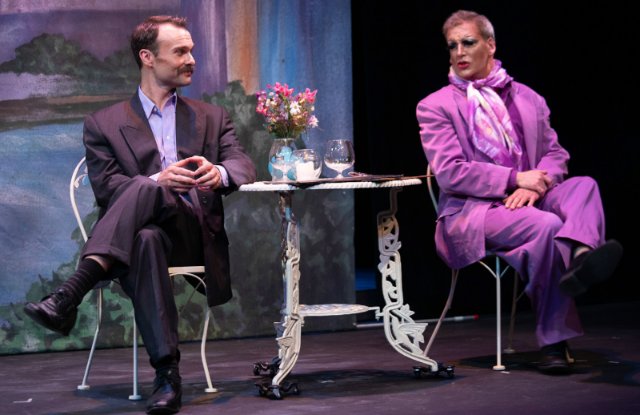 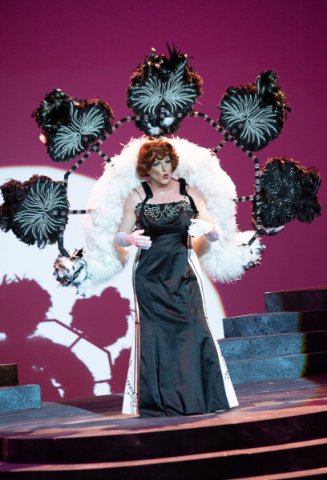 Photo by George Wentzler. Albin, as "Zaza," wears the production's most elaborate costume.

Surely, these lyrics from La Cage Aux Folles are apropos for Stage Door Theatre’s great production of the beloved Harvey Fierstein-Jerry Herman musical, based on a French play.

Undoubtedly, so does Stage Door. It is making its debut in the brand-new, state-of-the-art, $13 million Lauderhill Performing Arts Center.

Naturally, the company might miss the Margate venue it’s occupied the past 25 years. Even so, this production marks a triumphant new era for one of Broward County’s most popular theater companies.

This new beginning has kicked off with an old-fashioned, glamorous, early 80s Broadway musical.

Indeed, its many features include stunning costumes, chorus kick lines and Herman’s signature upbeat, memorable melodies. They include the show-stopping title song and the equally vibrant "The Best of Times," both of which the cast sings with verve.

While the entire cast is terrific as an ensemble, we must single out Larry Buzzeo as Albin/Zaza, Jamie Michael Parnell as Georges, Connor Delves as Jean-Michel and Elijah Word as Jacob.

Thanks to Linser’s detailed, sensitive direction, these performers embody their roles. They imbue each spoken word, gesture, lyric and move with sincerity.

A word of caution: The performers interact with the audience (we’re actors too; we play the club’s audience.) So, you never know which sexy, naughty character might want to sit on your lap. Therefore, if you’re the shy type, sit near the stage at your own peril.

The multi-Tony-winning La Cage is the first musical to win the “Best Revival” Tony twice. Still, it can feel sentimental. However, thanks to the work of Linser and his cast, we sense true sentiment in songs such as “Look Over There.”

The characters live in the French Riviera town of St. Tropez during the 1970s.

Of course, it’s a beyond offensive phrase to many in 2018.

After all, we’re living during a time when homosexuals marry mostly without controversy and adopt children. They lead mostly normal, uninterrupted lives, as do transgendered individuals.

Still, there’s a sense of unease, as bigoted people march and hold demonstrations. Moreover, the current White House seems hostile toward minorities, including members of the LGBQT community.

As far as the LGBQT has come out of the closet, some are trying to force them back inside. Then, in the show, there’s Edouard Dindon. He’s a Trumpian character, a self-loving, arrogant politician aiming to shut down clubs such as La Cage.

Of course, the announcement throws the club into chaos. But one would think that a veteran, natural performer such as Albin could easily portray Jean-Michel’s heterosexual mother. However, this musical is about more than a performer’s ability. And while the story’s situation leads to irresistible farce, this show includes serious subject matter.

Indeed, La Cage is about many things. Among them are loyalty, courage, one’s feelings, betrayal, desire, independence, acceptance, what’s considered “Normal” and standing up for oneself.

To illustrate how well this cast conveys the show’s important themes, consider the anthem “I Am What I Am.” Albin sings it after he learns he’s not invited to meet Jean-Michel’s future in-laws.

Overall, Buzzeo is outstanding as Albin, but his rendition of the song is a highlight. He begins with his hand on his chest. Clearly, his heart is broken. In a soft, but determined voice, he begins singing. As the number progresses, he betrays emotional pain and an emphatic tone. Buzzeo’s voice grows more forceful, but the hurt is still present. Then, he lets loose, with defiance. Disgust and anguish drip from his voice as the song reaches its emotional peak. It ends as a proud but hurting Albin throws something at Georges.

This song, and Buzzeo’s bravo rendition of it, illustrates what can happen when someone reduces another’s humanity to basically an unwanted insect.

Nobody’s saying that Albin is the easiest person with whom to get along. He’s easily frazzled, high-strung and proud. These are traits which Buzzeo communicates hilariously but truthfully and without arrogance.

Albin is also a loving, tender husband and father-figure. They’re traits which Buzzeo nails without being overly sentimental. As a result, we sympathize with the character. Further, we laugh with him, not at him, when he acts overly flamboyant and dramatic.

In addition, it’s easy to like Georges, the voice of reason and calm to Albin’s nervous energy and outbursts. Buzzeo and Parnell share a touching chemistry during heartfelt songs such as “With You On My Arm” and wistful numbers like “Song on the Sand.”

The two sing tenderly, while embracing each other convincingly. At times, they look into each other’s eyes.

Even though Georges isn’t as colorful as Albin, he’s still opinionated and prone to forceful emotion. While Parnell deftly captures these traits, he also lends Georges a polished demeanor with an elegant flair, accentuated by his black tuxedo. Meanwhile, Parnell has a strong, expressive voice, filled with bravado in numbers such as “Masculinity.” Non-verbally, the actor conveys clear emotions with expressive eyes, a mere shake of the head or a raised eyebrow.

By contrast, we’d boo, if we could, the bigoted politician. Thankfully, our adorable, if eccentric characters ensure he’s uncomfortable in the club. We feel a sense of schadenfreude as he feels practically trapped.

“Jean-Michel, you’re so lucky to have normal parents,” the politician’s daughter, Anne says. A sensitive Alexandra Van Hasselt plays her.

While James A. Skiba stands tall and proud as the right-wing politician, he could endow the character with more ruthlessness and arrogance.

However, there’s plenty to love in this production. For instance, there’s the energetic orchestral music, featuring seven live musicians. That doesn’t include an on-stage accordion player who adds humor and enlivens the proceedings during certain numbers.

Then, we surely enjoy the performers’ rangy, expressive and clear singing, the physical, creative choreopgrahy by Danny Durr and Jenny Hegerty and the gorgeous costumes by Jerry Sturdefant.

Despite a microphone malfunctioning briefly, it’s hard not to like what we see and hear.

Director Linser has created vibrant and telling stage pictures. None are more touching than one in particular.

Georges and Jean-Michel (an independent, frank, yet later touching Connor Delves) are talking to each other about Albin. They’re very close in proximity. Meanwhile, Albin sits far from them, wearing a forlorn expression. For the moment, it’s clear Georges and Jean-Michel have isolated Albin from the family. He obviously feels unwanted.

La Cage, depite its memorable, upbeat melodies, eye candy and relevant messages, isn’t perfect. The ending seems implausible. Specifically, are we really to believe that the bigoted politician would disguise himself as a drag queen – even if that’s the only way for him to avoid blackmail? Surely, he’s crafty enough to think of another way to escape.

With that aside, let us commend the entire company for a production that’s a bit less extravagant than previous New York mountings. Still, it’s elaborate enough and finds the humanity in the piece.

No doubt, the best of times are now for Stage Door Theatre.