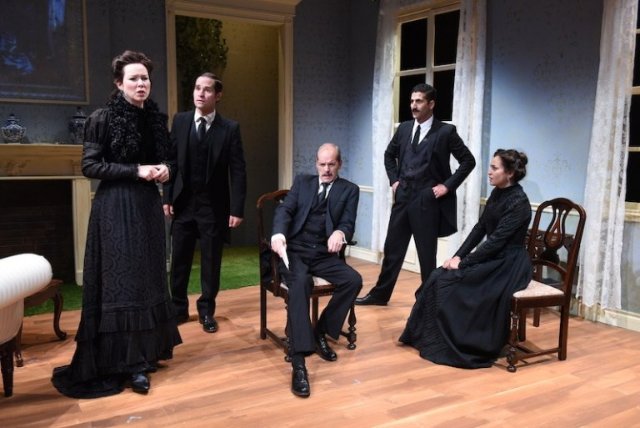 Howards End, the stunning new production by Remy Bumppo Theatre, weaves together strands of three families. The wealthy and elite Wilcoxes—father, sons and daughter—the Schlegel sisters, who belong to the intellectual gentry, and poverty-stricken Leonard Bast and his wife. The script by Douglas Post, adapted from E.M. Forster’s 1910 novel, is directed by Nick Sandys.

These lives in century-ago Britain are played out on a single set that becomes, in turn, country houses and various city flats and houses. The play opens with the funeral of Ruth, the wife of Henry Wilcox (Mark Ulrich), at Howards End, the country house she loved. Son Charles (Michael McKeogh), his wife Dolly (Emily Tate), younger son Paul (Tommy Malouf) and daughter Evie (Natalie Santoro) form a family portrait in black. In a discussion of the will, they find that Ruth has bequeathed the Howards End property to Margaret Schlegel (Eliza Stoughton), the young woman she has befriended.  Father and children are appalled and decide to ignore Ruth’s request.

At their family home in London, Margaret and her sister Helen (Heather Chrisler) meet young Leonard Bast (Terry Bell) at a concert; he comes to their home because of a mixup over his weather-beaten umbrella. We learn about Leonard’s life with his fiancée Jacky (Jodi Kingsley) and their difficulty in earning enough money to live on. The sisters determine to help him improve his life.

The  Schlegel sisters, lovers of poetry, music and socialism, are privileged women who see the injustice in society and work for change. They’re the progenitors of today’s women fighting for justice and against the patriarchy. But they have family money, which enables them to live the life they choose. Margaret says to Helen, “You and I and the Wilcoxes stand upon money as upon islands. It’s so firm beneath our feet that we forget it exists. It’s only when we see someone, like this young man, tottering, trying to find the flimsy implement that keeps him dry and out of the wet, that we realize what an independent income really means.”

Their lives change as Margaret and Henry become friends and he proposes marriage to her. Despite his children’s doubts about Margaret, the marriage proceeds.  Helen has a brief but unfortunate affair and goes off to , to pass her pregnancy there.

The plot of Howards End features several odd events that change the course of the plotline dramatically and mar this otherwise well-written script and its complicated three-family story. First is Helen’s pregnancy after a one-night fling; yes, it can happen,  but really? Second is Jacky’s sudden appearance out of Henry’s past, and finally a silly accident that has calamitous results for Charles. Those events all happen more or less the same way in the Forster novel, but they have more time (and pages) to play out.

Despite these plot weaknesses, Howards End is a marvelous example of Remy Bumppo Theatre’s way with words. That is, their mission to create thought-provoking theater with a literary approach. Their motto, “Think theatre,” sums that up. This production of Howards End is new in another way. It’s the company’s first commissioned script, written by Chicago playwright Douglas Post,who has written many other plays, musicals, screenplays and teleplays.

Director Sandys has a sterling cast to direct. in particular, the Schlegel sisters and Chrisler both sparkle in their roles. is a Remy Bumppo core ensemble member who has brightened the cast of recent plays such as Fallen Angels and Born Yesterday. Chrisler gave memorable performances in Machinal and Mies Julie.

The set design by Yeaji Kim is smartly simple. The setting is a drawing room at Howards End, a country home, or other houses or flats in and thereabouts.  Kim’s ingenuity is that three large rear-wall projections are either paintings or windows looking out on country landscapes. Set changes mean a sofa, a table and a few chairs are reconfigured to create a new environment.

Umbrellas are ubiquitous throughout Howards End. The play opens with the Wiicox family, in dark macintoshes and hats, with umbrellas unfurled, consigning their wife and mother to her grave on a rainy day.  Later an umbrella plays a role in a fortuitous meeting. And occasionally throughout the 2.5-hour play, cast members don their macs and brollies to swiftly and smoothly rearrange furniture for a scene change.

If you remember the Merchant-Ivory film, the 1992 Oscar winner for best picture, you may want to revisit its lush colors, landscapes and interiors, as well as performances by Emma Thompson, Anthony Hopkins, Helena Bonham-Carter and Vanessa Redgrave. It’s available on Amazon Prime.