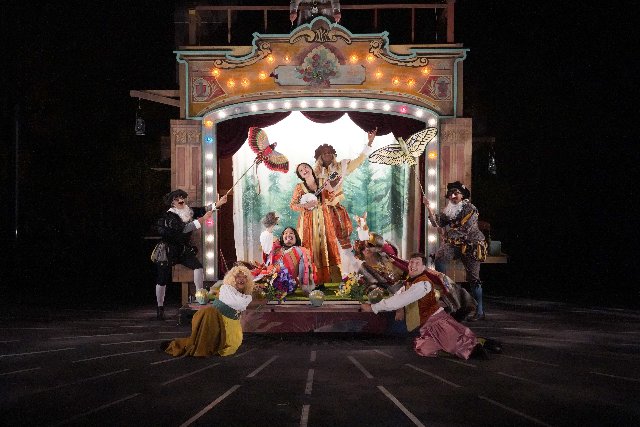 Shakespeare’s infrequently produced “The Winter’s Tale” is often characterized as a “problem play,” meaning that its tone is inconsistent – sometimes dramatic with psychological overtones, sometimes comic with mystic qualities.  But this play has more problems.  It lacks the gravitas of the Bard’s greater works; the text is bereft of the many memorable aphorisms and quips that we relish in other plays; pre and post intermission acts radically differ in disposition; and indeed, viewers will differ on whether Acts 4 and 5 are to be comprehended as real or apprehended as imagination.  To the great credit of Director Eric Ting; to adapters of the play Ting and Philippa Kelly; and to the company itself, Cal Shakes has solved the problem with a highly rewarding and entertaining production.

After the long Covid-19 related absence, it was a great pleasure to see Cal Shakes return to the wonderful outdoor Bruns Amphitheatre.  Yet, as a matter of full disclosure, this critic should note anticipating this production with trepidation and bias.  Attending over 100 plays a year, my mantra is never to leave a play at intermission based on an apparently weak storyline, because the plot twists in the second half may fully redeem the first.  I’ve never left a play at intermission more than once a year.  A performance of “The Winter’s Tale” in 2016 by the vaunted Oregon Shakes prompted such a departure.

Like many Shakespeare comedies, which this play was classified as in Shakespeare’s First Folio of 1623, the title tells nothing of the play’s content.  Pre-intermission (the original’s first three acts) takes place in Sicilia, whose King Leontes has hosted his childhood friend Polixenes, now King of Bohemia, for some months.  Queen Hermione is due to deliver a baby, and with no evidence, Leontes obsesses in the belief that Polixenes is the father.  Uniformly, Leontes’ advisors and even the Oracle at Delphos insist that he is wrong in his claim.  The king’s self-indulgent obstinance leads to multiple tragedies.  It’s been hard to view any play in the last several years without seeing it through a Trumpian lens, and this is no exception.

Despite an opening couples dance number that connects tenuously with what follows and the on-stage action being somewhat pedestrian, the drama in this realization is quite compelling.  The tension created starts with a cast of nine superb veteran actors who are among the Bay Area’s finest and who bring out rich interpretations of their characters.

Craig Marker is Leontes, who after a touching opening scene with his son, becomes one of the more venomous characters in the Shakespeare catalog.  Marker plays Leontes one notch below crazy and with extreme jealousy, irrational distrust, and insatiable vindictiveness.  Fearful of the king’s station and rancor, his counselors ultimately kowtow to his pettiness. Sadly, does this seem real-life familiar?

A charismatic Safiya Fredericks as the put-upon Hermione is more than equal to her counterpart.  Her insistence of innocence convinces the audience, but not Leontes.  Her turn to rage during her trial is equally believable.  All of the actors play multiple roles, and after intermission, Fredericks becomes (get this!) Polixenes, and partly in wacky disguise – but that’s another story.

The need for great acting in this version is magnified by the spareness of the staging.  Designer Tanya Orellana’s stage for Sicilia is virtually vacant except for a number of poles with long lights at the rear.  The costumes of the Sicilians by Ulises Alcala are eclectic/contemporary, but all in black and white, adding to the colorless austerity.

The great thing about “The Winter’s Tale” is that if the Sicilia part doesn’t work for you, just wait.  Except for many characters carrying over, all played by different actors, the “Bohemia” part is practically a different play.  In this version, a sign is even displayed saying “A New Play – by King Leontes,” signifying the adapter’s determination that the segment to follow is a figment of Leontes’ imagination.

Sixteen years have passed, and as proper and achromatic as Sicilia appears, Bohemia is correspondingly garish.  Costumes are bright and fanciful.  A colorful, old-timey traveling theater stage caravan centers the set.  The mood is bright and the plot focus is on the pending nuptials of a shepherd’s son and a foundling girl, who unbeknownst to all is the abandoned daughter of Leontes.  Farce replaces realism.

While holding to the playwright’s story, this adaptation of Acts 4 and 5 intersperses modern songs that add bounce and familiarity for the audience.  Shakespeare would probably roll over in his grave if he heard rock/pop songs like “The Time of the Season” and “Love Shack” in his play, but they certainly please the crowd.  The whole segment is full of fun, but it is also discombobulated by gaps in delivering the story and elongated by inclusion of the gratuitous musical numbers.

Which brings us back to the problem.  Is this great Shakespeare the way it was intended?  No.  Is this finely crafted entertainment that depicts a different treatment of a classic that is instructive and enjoyable in its own right?  Yes.  And on that basis, this is absolutely the right way to see this play that otherwise might disappoint.

As a final point, the director provides the cast with a mix of roles that he assigns to each actor.  Not only do the varied roles give each performer breadth in their individual performances, but the spotlight shines on all with remarkable equality, and they deserve it.  The actors not previously mentioned are Dean Linnard, Regina Morones, Cathleen Riddley, Sharon Shao, Victor Talmadge, dane troy [sic], and Phil Wong, who also serves as music director and factotum.