This Much I Know 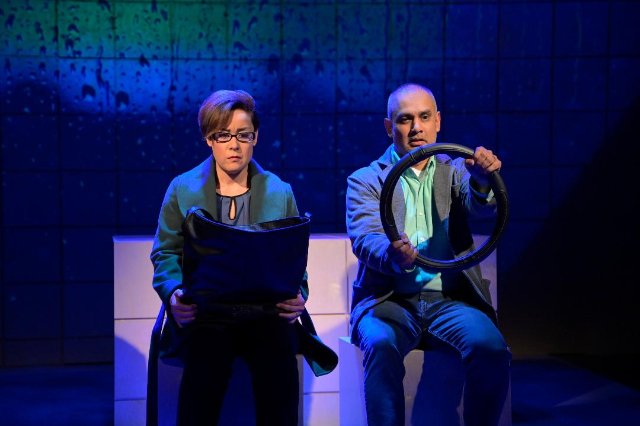 Some eras are dominated by particular motifs that seem to wash over everything.  So it is that some observers of Jonathan Spector’s brilliant new play on cognitive illusion will unconsciously tap into the allegory of the persistence of Trumpism.  Spector draws on the research of esteemed psychologist Daniel Kahneman who notes how difficult it is for people to process information that doesn’t conform to existing biases, i.e., even though we know that we embrace falsehoods, we reject the truths that are right in front of us.  “this much i know” addresses cognitive illusion along with issues concerning how we make decisions; how we change our minds; and what we are responsible for in a riveting, fast-paced narrative that entertains and provokes to the fullest.

The playwright has cobbled together three seemingly unrelated stories and interlinked them to elucidate his rhapsody on cognitive illusion and responsibility.  Two have factual situations as the kernel of their narratives.  The third may or may not relate to a specific incident known to the playwright, but in any case, it is an exemplar for bad things happening to good people.

In one vignette, Harold, a doctoral student in psychology, seeks a dissertation advisor for his proposed research concerning H. G. Wells’ “The Time Machine,” in which he has ideas about Wells’ motivation for creating the races of the Eloi and the Morlocks.  Problem is, Harold has been shunned by other faculty as he carries the baggage of having been raised by a prominent white supremacist.  What’s more, this professor, Lukesh, is Indian.

In another sub-plot, Lukesh is married to Natalya.  One day, she suffers a tragedy, and like most men would, Lukesh tries to comfort her the best he knows how.  However, his best misses the mark from Natalya’s perspective, and his behaviors fit a pattern that she resents.  Her reaction creates a barrier in their relationship.

The final component focuses on Svetlana Stalina, Joseph Stalin’s daughter, who defected to the United States during the Cold War.  Natalya’s Russian grandmother, who had been a childhood friend of Svetlana, had died under questionable circumstances during Stalin’s rule.  Natalya wants to find out why someone closely linked to the dictator’s daughter would die suspiciously.

Rather than presenting the stories sequentially, they are artfully interwoven into 60 scenes of everchanging venues.  Tanya Orellana’s clever scenery to represent this variety is abstract - a wall of white squares with compartments that open to reveal everything from tea service to paintings.  The wall also serves as a fine canvas for other visual elements.  Cubes, whose designs echo the wall, pass as various furnishings.

Three outstanding actors comprise the cast.  Each plays a central role along with a number of smaller parts.  Rajesh Bose is Lukesh.  He embodies the professor he plays, as he often pontificates to the audience as a self-satisfied and entertaining lecturer to his class.

In his didactic mode, Lukesh illuminates the underlying psychology behind the characters’ thoughts and actions, which brings clarity to the subtext in an organic fashion.  For example, he avows that people are predisposed to accept whatever they hear as truth (which is why falsehoods are so often peddled by unscrupulous politicians who know how sticky lies are).   He also teaches that all persuasion is self-persuasion, and that when one’s beliefs are directly confronted, the normal response is to become defensive rather than receptive.

Anna Ishida represents the quietly suffering Natalya, overshadowed and underappreciated, with understated intensity.  She also portrays Svetlana, trampled as well, but in different ways.  Trained by her father to be demonstrative, she is privileged because of her birth, but she feels more like property than a person.  She seeks the independence to speak her own thoughts.

Finally, Kenny Toll conveys the internal conflict that Harold faces with controlled animation.  He also plays several, often smiling and ebullient Russian men with thick accents as counterparts to the women.  As Harold, he bears resentment that the sins of his father devolve upon him, as he begins to question the beliefs that he was raised with.  It is mostly through this character that the playwright raises the issues of complicity, agency, and change.

The crux is this.  To what extent or until what point in life can a person be held responsible for beliefs and actions that may later be repudiated?  For those who were raised in an enlightened environment, there may not be sufficient appreciation of the consternation one faces when abandoning the accepted wisdom and social network of their upbringing.

Kudos to Director Josh Costello for the masterful orchestration of the many moving parts of this complex production.  It is remarkable that a world premiere night could go off so smoothly with such a multitude of ways it could go wrong.  Appreciation also goes to the whole creative team, including Lighting Designer Jeff Rowlings, Sound Designer James Ard, and Projection Designer Maxx Kurzunski.  The latter’s videos of picture portraits of characters who speak like drop-chin marionettes add a little extra levity to the proceedings.  Of course, the ultimate admiration is for Jonathan Spector’s script which is a commanding amalgam of intense instruction and captivating entertainment.

“this much i know,” a world premiere written by Jonathan Spector, is produced by Aurora Theatre Company and plays on their stage at 2081 Addison Street, Berkeley, CA through October 2, 2022.