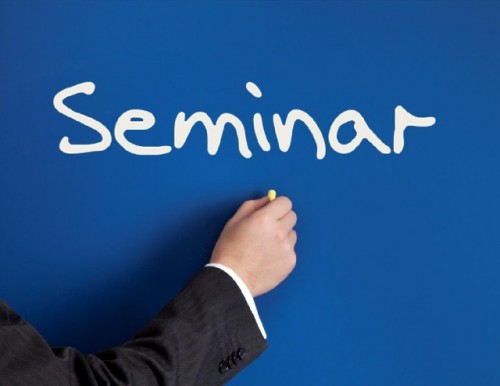 The lure of show business is magnetic and all-consuming if you’re an alpha male or female.  Plays and Hollywood movies are usually about young and hungry actors with a burning fire in the belly to perform anything, anywhere.

Theresa Rebeck is a playwright and screenwriter with credits on and off Broadway, and on Television.  She’s also a bit of a darling with the younger set, thanks to the more modern on-the-nose-dialogue she gives her characters (translation: beaucoup F-bombs).  Stories and subject matter that attract and peak her interest are more in tune with the 25 to 40 year-old age demographic (she’s 56).  We are not watching the type of a comedy play your father and grandfather enjoyed. And, she is a fierce supporter and activist in the movement to employ more female writers in every aspect of the arts. She’s smart, clever, and popular.

“Seminar”, written by Rebeck, and directed by Desert Theatre Works co-founder and DTW’s artistic Director Lance Phillips-Martinez, is currently on the stage of the Arthur Newman Theatre in Palm Desert.  The play explores the passion of writers, novelists, and authors instead of actors who once were the favorite characters of choice by playwrights and screenwriters.

The action takes place in Kate’s parent’s upper west side nine-bedroom apartment that affords plenty of space for the group’s raging hormones, heated literary discussions and critiques of each other’s work to take place.  Also, the apartment affords the group the time and place to dissect the jaded, cynical, and acerbic Leonard’s background and history in the New York literary world when he’s not around.  He was once a promising new talent but instead of growing as a writer he sputtered, crashed and burned after just two novels.  And his passion for writing never returned. Instead, he became a sought after writing coach and guru to aspiring young talent.  But, his students had better come to his seminars with skin and egos as thick as elephant hides.  He berates, he scolds, he goads the students to look inward and to “suffer a little” for their craft and their future profession. “Seminar” is a blistering satire on the aspiring writer genre.

The ensemble cast throw themselves into their portrayals with gusto, sometimes, a little too much gusto.  But that is not necessarily all their own doing.  This is one of Rebeck’s lightweight plays and evening’s in the theatre. There is very little new ground being broken here.  The one dimensional characters are shallow and uninteresting; failing to engage me enough that I found myself unable to root for any of them.  Having said that Luke Rainey as Leonard, has a very poignant and introspective five minute monologue in the second act that delves into the scary and frustrating lifestyle of professional writers. It’s an illuminating and instructive peek into the professional writing world.

By the same token Gabriel Lawrence as Martin, gives us the viewpoint of the tortured aspiring young writer in a lengthy first act monologue who is unsure of his ability to write meaningful stories and characters, and as a result, hesitates in participating in Leonard’s bruising exchanges when critiquing the writing of his students.  Leonard’s trial-by-fire method is too intimidating for the men of the class but not for the young women who seem to have a secret weapon that protects them from the Leonard’s of the world ( humm, I wonder what that three letter weapon could it be?).

“Seminar” is not a study in intellectual rigor by a long shot, but it can be an entertaining evening of theatre, if one goes not expecting to challenge the gray matter in one’s head.  The comedy runs through September 13, 2014