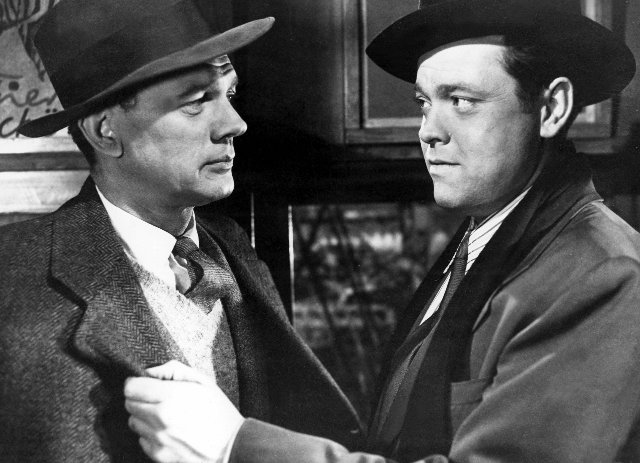 Joseph Cotton and Orson Welles in The Third Man.

The nighttime streets are dark and shadowy, elegant in rubble and 19th century buildings. Cobblestones glisten in the light from street lamps. Carol Reed’s 1949 film, The Third Man, shows us a visually stunning Vienna, a masterpiece of the noir realm, and probably one of the greatest films of all time.

The black-and-white film is a thriller, starring Joseph Cotten, Trevor Howard, Alida Valli, and, of course, Orson Welles as the elusive Harry Lime. Welles only appears in the last third of the film, but steals the show and becomes the lead…although not the hero. He’s one of those evil but charismatic characters, whose 21st century counterparts are Tony Soprano, Walter White (“Breaking Bad”) and yes, Don Draper (”Mad Men”).

Graham Greene wrote the screenplay for The Third Man after visiting Vienna, finding it atmospheric, and meeting a man in a bar who told him a story about a crime similar to Harry Lime’s. Greene wrote a novella as a source text—and then turned it into the screenplay. The story takes place in Vienna, soon after the end of World War II. Wartime rubble is everywhere. The city is divided into four zones by the Allies—the British, French, Americans and Russians. Some scenes were actually filmed in London, when Welles refused to go back to Vienna for filming.

The film opens with the arrival in Vienna of an American writer of western pulp fiction, Holly Martins (Joseph Cotton), who has come because his childhood friend, Harry Lime, promised him a job and a room. Martins learns that Lime died a few days earlier after being hit by a speeding car on the street. Martins meets a British officer at the cemetery and also sees an intriguing woman (Anna Schmidt, played by Valli). He begins to think the facts of Lime’s death are suspicious and demands that the officer (Lt. Calloway, played by Trevor Howard) investigate. Calloway tries to get Martins to leave Vienna but Martins stays, meets (and falls in love with) Anna and tries to learn what happened to Harry. Martins eventually learns more about Lime from Calloway, including crimes Lime has committed. In one of the film’s famous scenes (with an essential cat), Martins discovers that Lime is still alive. The Ferris wheel scene and the iconic chase through Vienna’s sewers cap off the film.

The other characters in The Third Man are key to the noir nature of the film. Baron Kurtz (a weaselly character played by Ernst Deutsch), Harry’s doctor, Dr. Winkel (Erich Ponto) and of course, the mysterious Mr. Popescu (Siegfried Breuer) are strong hints that all is not as it seems in Vienna.

The musical composition, “The Third Man Theme,” performed on the zither by Anton Karas, is heard throughout the film, sometimes sad, sometimes jaunty or jangly, sometimes melodramatic, but always a key element. The song became famous separately from the film and topped the music charts in 1950, making Karas famous.

The expressionistic cinematography in The Third Man makes Vienna another character in the film. Robert Krasker, the cinematographer, used wide-angle lenses and skewed framing so that exteriors seem off balance. Nighttime chase scenes through the streets and rubble of Vienna are simply gorgeous in their noir shadows, always suggesting danger is just around the next caryatid. Late in the film, Martins goes to visit someone in the Soviet zone and behind him, you see workers on the pile of rubble that used to be the Gestapo headquarters in Vienna.

The final scene, where Holly waits for Anna at the side of a road and she walks toward him, past him and out of the scene without looking at him, is shot with a very wide angle, making for a long and suspenseful tracking shot.

Two elements of Vienna take on extreme importance in the film. The complex sewer system below the streets where the final chase takes place is dark and wet with many twists and turns. You don’t have to use your imagination to know how it smells. The wiener riesenrad or giant Ferris wheel (212 feet tall) near the entrance to the Prater amusement park is where Martin and Lime finally meet. The famous scene in the cab of the Ferris wheel was filmed at Shepperton Studios in London, where the cab (and some of the sewer system) were reconstructed. When Martins and Lime get off the Ferris wheel, Lime makes his famous “cuckoo clock” speech, comparing Italy and Switzerland.

If you can find them, there are two documentaries about the film. Who Was the Third Man? is a 30-minute film made by the city of Vienna in 2000 with interviews with cast and crew. Shadowing “The Third Man” (2005), is a 90-minute story of the making of the film.

The Third Man is being screened this week at the Music Box Theatre as part of the Noir Across the Atlantic series.