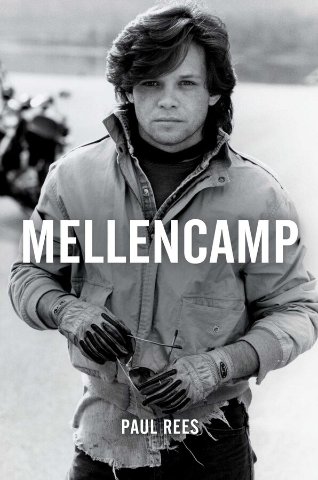 The first music he loved was Motown soul music that he listened to on AM radio stations from Detroit, Chicago, and Louisville.

The first record he bought with his own money at the Sears Roebuck store in Seymour, Indiana, was Chubby Checkers’ number one hit, ”Peppermint Twist.”

The first band he played in was the Five Ms, all guys with names starting with M. They learned six or eight songs, enough to get a gig at a house party and once, a 45-minute set at the American Legion. A year or so later, he joined a band that meant business: Crepe Soul had eight musicians, all older than John and six of them Black. (He says that’s when he began to learn about race in America.)

His first hero was Paul Newman’s character in Hud. At school, he “shape-shifted into his own version of Newman’s Hud, a self-styled rebel, cause uncertain. In class, he was sullen, smart-mouthed. On the sports field, swaggering.” John Mellencamp was 14 years old, a freshman at Seymour High School.

John and his dad, Richard Mellencamp, didn’t get along; they fought about a lot of things that fathers and sons fight about, especially about John’s long hair.

You could change the names and places and this would be a story about a band of rock musicians who grew up in the second half of the 20th century. Musicians like Jack White, Billy Corgan, and Bruce Springsteen. Musicians who rebelled against the ordinary lives that their families and communities expected them to live.

Mellencamp is British writer Paul Rees’ story of a midwestern teenager growing into a musician who came to represent heartland rock, a term he disliked. The book, written with the cooperation and support of Mellencamp and his management, is highly readable, a blend of nonfiction and oral history, with many long quotes from interviews with Mellencamp, fellow musicians, friends and relatives who shared their perspectives with Rees. The book includes a 16-page photo insert, mostly from the Mellencamp family album.

Mellencamp was a cocky and sometimes surly kid, Rees’ interviewees said about their friend and bandmate. He never really lost that chip-on-his-shoulder attitude as his music brought him wealth and fame. Despite being an “authorized” biography, Rees’ book does not gloss over the musician’s spiky personality, belligerent outbursts, and often chaotic recording sessions (at one of them, he fired all the band members). Guitarist Andy York said, “John gets a little bit of enjoyment out of being known as a Little Bastard, I think. It’s not a bad rep to have. People will get out of your way and jump to it.” Bad rep or not, the irascible nature is a lifelong feature of Mellencamp’s personality.

“I like being the underdog. I’m like Sisyphus. l like rolling the rock up the hill,” he told Rees. “I’m not proud of being as difficult as I’ve been. Some people didn’t deserve it. Some people had it coming. Some people I’ll never forgive… But I wouldn’t trade what I’ve done for anybody.”

Mellencamp stayed true to his Indiana roots. Even as he gained national renown and could afford a loft apartment in Manhattan and a home on a South Carolina island, his main creative space, recording studio and home are in Belmont, Indiana, 45 minutes northwest of Seymour, his hometown. (Seymour, with 17,000 population, is in south central Indiana, tucked into an area surrounded by Indianapolis, Cincinnati, and Louisville.) The Belmont Mall, as he came to call it, had been his recording studio and rehearsal space since 1985. A couple of miles away up a dirt track is his art studio, where he has been a serious painter since the mid-80s.

Mellencamp took painting classes with Indianapolis artists and studied at the Art Students League in New York. He was drawn to the European expressionists of 1920s Berlin, especially Otto Dix and Max Beckmann. He also has visited the Art Institute of Chicago several times to see Pierre-August Renoir’s “Two Sisters (On the Terrace).”

His paintings have been described as primarily “handsomely grotesque portraits in oil” against shadowy backgrounds. He once said in an interview, “Painting is much more exciting than writing songs. It’s the one thing I’ve found in my life that I really enjoy. I’ll paint some days and never be interrupted or never even speak a word to anybody…. I like painting better than girls, better than motorcycles, better than music.” His work has occasionally been shown in one-man exhibits.

His 1982 album, American Fool, was his first commercial success; its single, “Jack and Diane,” was number one on the Billboard Hot 100. Through most of his career, his work could be categorized as rock, roots rock, heartland rock, etc., and created with a number of producers. Recently he worked with T-Bone Burnett on acoustic albums, such as No Better Than This (2010), which was recorded at several historic music locations, and Plain Spoken (2014). He was inducted into the Rock and Roll Hall of Fame in 2008.

In addition to his music and painting, he also has written and acted in  films and written a theater musical, Ghost Brothers of Darkland County, which has been staged several times.

Just as Bruce Springsteen’s “Born in the USA” was misunderstood by the 1984 Reagan campaign to be a patriotic anthem, Mellencamp’s music was often adopted for the wrong reasons. John McCain’s 2008 primary campaign was using “Our Country” and “Pink Houses” until Mellencamp’s team reached out to “educate the campaign” on the songs’ messages and the leftwing social causes Mellencamp supported. The Republican campaign stopped using the songs. The same thing happened in 2010 when his music was used by the National Organization for Marriage at events opposing same-sex marriage. The organization was told Mellencamp supported marriage equality and same-sex marriage; they stropped using his music.

After his participation in Farm Aid concerts in support of midwestern farmers in the 1980s, he was called “the spokesman for the common man” and “voice of the heartland.” He hated that branding and said in an interview with Rees, “First of all, the heartland is very conservative… Indiana is a red state. And you’re looking at the most liberal motherfucker you know. I am for the total overthrow of the capitalist system. Let’s get all those motherfuckers out of here.”

I’ve been in Seymour, Indiana, several times. The last time was for a lunch break during a road trip to a Springsteen concert in Nashville. We stopped at a sweet little diner known for its breaded pork tenderloin sandwiches (an Indiana—and Iowa—specialty). The place was decked out in checked gingham, with many large Mellencamp photos and album covers around the walls. I also remember, from another visit, a Holiday Inn bar decorated with Mellencamp photos and memorabilia. He’s a hometown hero.

Mellencamp is a perfect read for classic rock fans and lovers of midwestern stories. At 300 pages including index, the many interviews and anecdotes make it a good book to binge instead of one more TV series.

Paul Rees has written about music for more than 20 years, including roles as editor of two of the UK’s long-standing music publications, Q and Kerrang! His six books include Robert Plant: A Life and The Ox: The Authorized Biography of The Who’s John Entwistle. He lives in Scotland.

Pre-order your copy of Mellencamp from your local indie bookstore, from bookshop.org or from the publisher’s website.