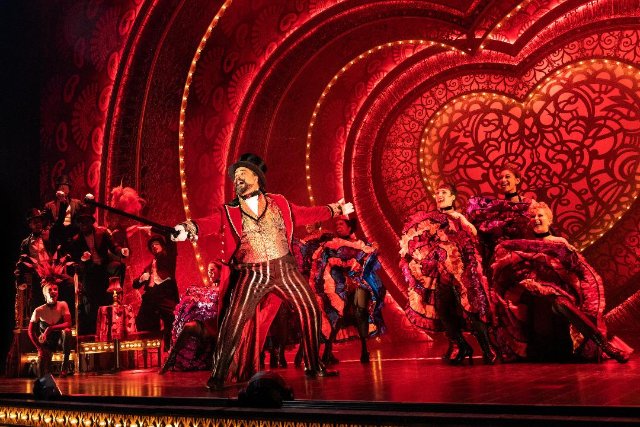 Austin Durant and cast. Photo by Matthew Murphy for MurphyMade.

To witness an audience so totally primed and pumped at a city’s very first performance of a live musical is quite remarkable.  After all, “Moulin Rouge! The Musical” is not (yet) a cult classic like “Rocky Horror Show.”  And it wasn’t just the din of howling at the first familiar uplifting rock-and-roll song, or the first stirring can-can dance.  Even the shower from a confetti wand and hippy (i.e., the body joint, not the counterculturist) posturing produced paroxysms of enthusiasm from the youth dominated crowd.

And then there was the curmudgeon among the assembled.  Sometimes a theater goer attends a performance expecting to grit his teeth and suffer through mindless eye and ear candy that is a bad fit for his interests.  Indeed, the old guy resisted the first assaults on the senses.  But it wasn’t long before he appreciated why this work won 10 Tony Awards.  Its production values are top flight; the mix of music has broad appeal; the story engages, despite its stock elements; and all categories of performance in this touring show are first rate.  In a word, it sizzles.

The appeal of the show draws on the naughty titillation of the fin de siècle cabarets that emerged in the steamy Montmartre district of Paris, where the working set, bohemians, and the demi-monde (the upper class who go slumming), sat side-by-side.  The Moulin Rouge marked the spiritual epicenter, where the can-can was originated and danced by courtesans.  The great artist from that period, Henri Toulouse-Lautrec, patronized the scene, and his paintings promoted its seamy but seductive attraction.

With that backdrop, this story tells of a young, penniless songwriting American, Christian, who falls in love with Satine, the star of the show – no surprise there.  Conflict derives from the financial distress that the Moulin Rouge suffers.  Its savior is a rich Duke, but there is an extra price to pay.  He insists that his personal relationship with Satine be part of the package of saving the nightclub.

The entertainment in the show comes from many sources other than the plot.  As a jukebox musical, songs play a vital and nostalgic role.  Sixty or more appear, and they constitute the songbook of our lives, drawing from many decades and many genres including rock, pop, r & b, jazz, and even opera.

Some songs are pretty much full renditions and may recur, such as the thematic “Lady Marmalade” (Voulez vous coucher avec moi?), “Your Song,” and “What’s Love Got To Do With It?”.  Others are in medleys, and some are amusingly sampled in quick succession with phrases from songs serving as dialog.  But what makes the music work so well is that the arrangements are appealing and delivered by fantastic voices and a fine orchestra.

Some of the performers are outstanding stylists as well, especially Conor Ryan, as Christian, who rode every emotion convincingly.  Although it was by no means his most significant contribution, he even made a snippet from the super treacly “Sound of Music” have character.  And speaking of characters, his straggly hair deserves special mention as it added heft to his acting by draping down his forehead and being flung back into place in tormented moments.  His love interest, Courtney Reed’s Satine, doesn’t have quite the range of demands placed on her, but she sings in a traditionally beautiful voice.

Two other actors stand out.  Austin Durant is the owner of the cabaret, Harold Zidler, outfitted like a ringmaster at a circus.  He plays the flamboyant majordomo with élan but also displays a fine baritone voice as well.  The crippled, bittersweet Toulous-Lautrec is portrayed by André Ward, and it is a shame that we don’t get to hear more of his smoky-mellow bass-baritone voice.

What makes the musical lively, however, is its overall ambiance.  Of course, the club itself is bedecked in cathouse red, highlighted by heart-shaped neon lights with additional dramatic lighting when called for.   It creates a lively staging for the flashing flair of the colorful can-can skirts and other striking costumes.  Other sets offer backdrops for diversity, from the promenades by the fashionable set on the Champs-Élysée to the performance preparations in the dark, monochromatic rehearsal space.

And then there’s the dancing.  Movement fills the stage and creates excitement, and there’s plenty of excellent choreography and execution, both in period and modern styles.  It all adds up to contribute to an evening of fine Broadway-style entertainment.

“Moulin Rouge! The Musical” with book by John Logan; based on the movie “Moulin Rouge” written by Baz Luhrmann and Craig Pearce; and with music and lyrics by various composers, is presented by BroadwaySF and plays at the Orpheum Theatre, 1192 Market Street, San Francisco, CA through November 6, 2022.