The Lion, the Witch, and the Wardrobe

By C.S. Lewis; Adapted by Adrian Mitchell, at Stratford Festival 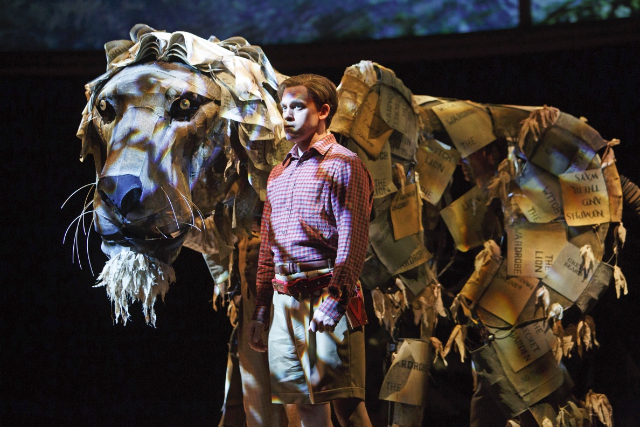 The imaginative lion at Stratford Festival in Canada,

I did not grow up with this story, and, in fact, have seen only two of the “Narnia” films, so I was less familiar with or informed about this delightful play than were many of the children and younger members of the audience.  In fact, they were apparently comfortably acquainted with the material and more sophisticated in their appreciation of its many magical elements.  Without punning on its supernatural fantasies, I really found this material enchanting.

As several program notes indicate, The Lion, the Witch, and the Wardrobe is about the imagination of children. First of all, Stratford’s lovely production is enormously imaginative.  The stage-creature that is Aslan, the holy lion, is inhabited by three men and made up of five separate segments which move fascinatingly together.  It doesn’t hurt, either, that Aslan is voiced by the vocally amazing Tom McCamus, who was apparently born with an inner megaphone and tone control. Stratford’s cast and technical staff are listed above, and include a remarkable roster of major artists.

Understandably, just under internationally famed director Tim Carroll, the program lists the movement and puppetry director, as well as designers, projectionists, musicians, and even a magic consultant. I hardly know whom to credit most for the overall charm, beauty, and fantasy of this sweet-natured adventure.

This very successful, complex and rich performance was in more ways than one a surprising new experience for me. Seated near me were a number of pre-teens and teenagers, who probably would not like being called children.  They surprised me by not just laughing and applauding, but seeming to be satisfied at seeing a familiar, fondly regarded fantasy being brought to life in believably beautiful performance. Funny too. My applause was for discovery; theirs was appreciation.