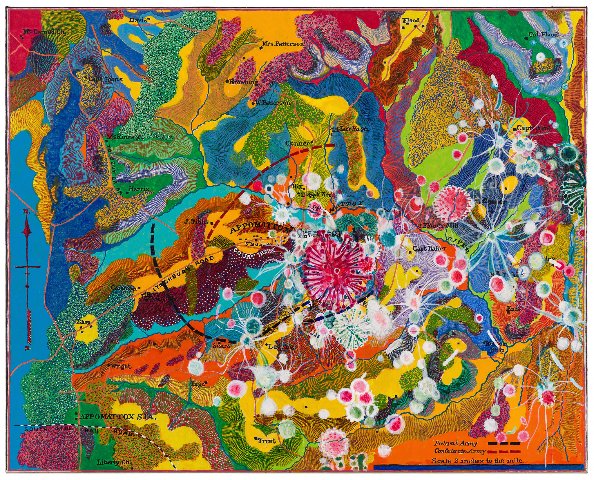 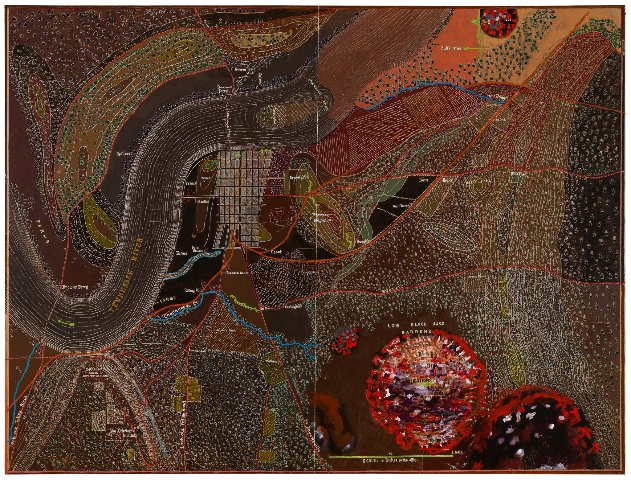 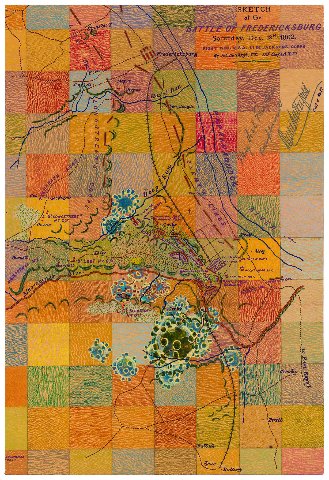 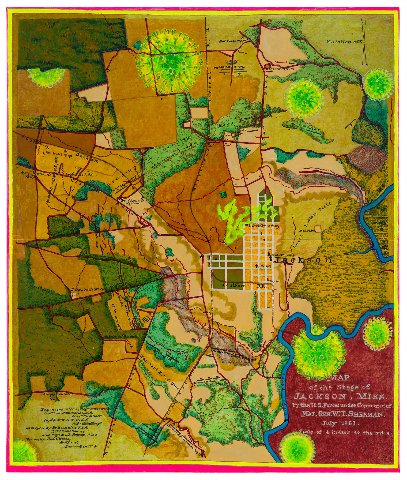 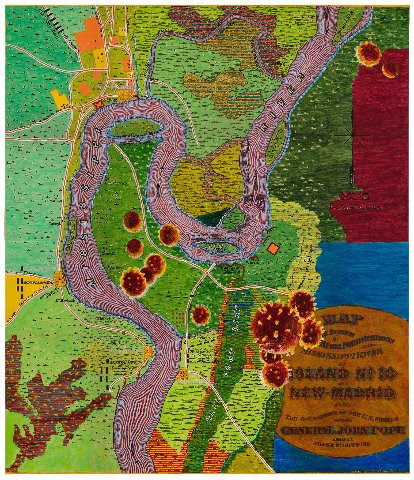 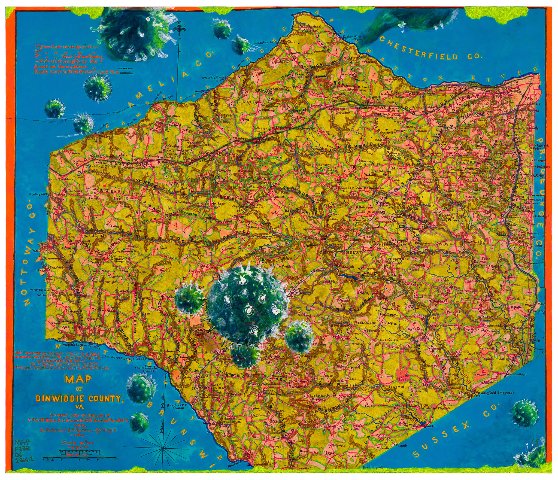 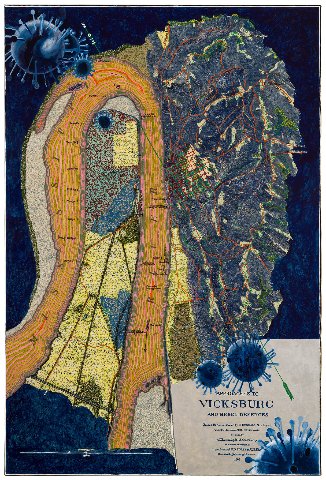 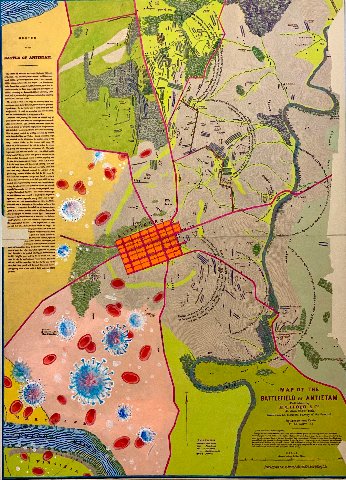 Floating above the map landscapes of 1860s Civil War battlegrounds are beautiful delicate images inspired by scientific photographs of the most deadly and devastating virus of the century—SARS-CoV-2—as well as images of other viruses. This recent series by Joyce Kozloff, titled “Uncivil Wars,” was on view last summer at the DC Moore Gallery, 535 West 22nd Street, NYC.  Kozloff has returned to the theme of mapping and continues to pair the present and the past in her inventive dialectics focused on the fragility and arbitrariness of knowledge, whether that knowledge be cartographic or epidemiological.

As of September 8, 2021, the Center for Disease Control estimates there have been 643,858 deaths (as reported on death certificates) from the Coved-19 pandemic in the United States.  Other sources estimate that some 4-5 million people have died world-wide.  Curiously, for decades the number of deaths of Civil War soldiers was placed at the similar number of 620,000.   However, in 2012 new evidence and algorithms have determined Civil War mortality to have reached a figure close to 750,000.  And with the new horror of variants, such as the Delta strain, the pandemic deaths in the U.S. may similarly rise to that higher number.

The Civil War deaths were not all from bullet or bayonet wounds.  It is estimated that two-thirds of deaths were from pneumonia, typhoid, diarrhea, dysentery, and other infectious diseases.  In any case, the Civil War deaths were grim, messy, and heart-breaking—not much different from the agonizing, if perhaps more antiseptic, deaths in hospitals and nursing homes during the past eighteen months.

Knowledge of the past, we learn upon reflection, is always filtered by the ways we have grappled with and absorbed the issues of the present.  In a June interview with Barbara Pollack (transcript available through DC Moore Gallery), Kozloff recalled visiting a cemetery three years ago in Greenville, South Carolina, where she had gone to do research for a public art commission.  The cemetery contained a section of Confederate soldiers’ graves—well maintained with each exhibiting a small Confederate flag. The flags were unexpected to Kozloff, who commented, “I didn’t anticipate all the flags that residents were perpetuating.  That experience brought it home to me that for some people, this war is still going on.”  Indeed, the past—even a dark distorted past—can powerfully grip the future.

The battle maps Kozloff chose to use in her new series were often drafted by ordinary soldiers, from both the Union and Confederate sides.  Soldiers in the trenches needed to know where they were going in the smoke and fire of battle.  Other maps were made by officers who had cartographic skills.  Kozloff has chosen large maps, transferred the images to canvas, and filled in details to give a sense of the landscape and even the sense of battle.  Battle of Appomattox Court House presents bursts of oranges, maroons, yellows, greens, and dark blues that evoke the excitement of fireworks floating above the land even though the silhouettes of such bursts clearly suggest the photographs of the viruses.  To give texture to the terrain Kozloff exercises one of her signature styles of short hatchings to create texture and dense patterning.  For The Battle of Vicksburg she paints a bend in the Mississippi River pushed against what appears to be a woodland landscape.  Flying down from the central map image are dark blue globes suggesting not only virus images but spiked cannon balls.  In her interview with Pollock, Kozloff makes clear that the virus images are not just about disease: “People sometimes think I’m placing images of viruses where there were actual viral outbreaks but they’re not.  It’s a metaphor for an underlying national disorder which goes back to the Civil War, and earlier.  It’s our American history and I’m an American artist, trying to contend with it.”  Indeed, American history is fraught with the contradictions of glossing over the nastiness and fatal realities of what people have inflicted on one another and of seeking out the unexpected joys of people connecting even in situations of disaster.  The message seems to be that in spite of the power and control exercised over our lives, we have the capacity to be critical. sentient beings capable of acknowledging such truths.

At the DC Moore Gallery, the Uncivil Wars exhibition was accompanied by works focused on war from earlier series.  Nine works from American History, completed in 2008, are smaller works done with etching, collage and watercolor.  Four works from the Boys’ Art series are mixed media on paper, done from 2001-03.  And, in addition, there are four examples of collage on paper, about one meter high called Manifest Destiny of 2008, based on World War I trench maps that Kozloff had seen at the Imperial War Museum in London.  Repeated through these last four is the phrase, copied from a wall label at the Imperial War Museum: “In World War I, 9 out of 10 deaths were soldiers.  In today’s wars, 1 out of 10 is a soldier.”  The phrase brings home the point that today’s wars, like the pandemic, affects everyone; there is no escaping.  That point is tough to acknowledge, but Kozloff manages to guide us through these realities with stunning color and finesse.