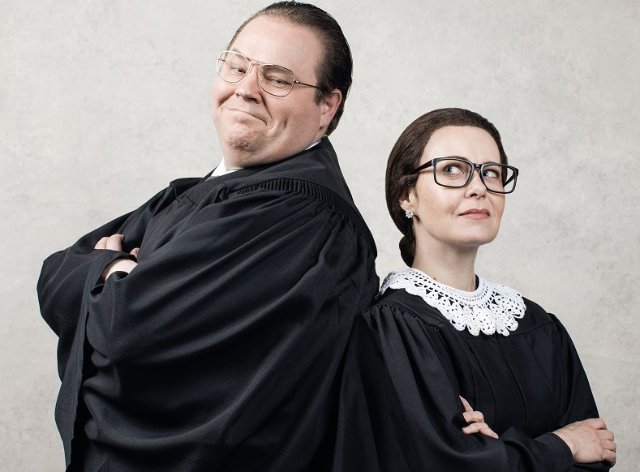 Opera simply is not supposed to be this much fun.  There are few comic operas that maintain intense humor throughout – Gianni Schicchi may be an exception.  Scalia/Ginsburg not only shares that rare comedic perch, but it is informative almost like no other opera.  That is not to say it is a great operatic composition, but most opera goers would find Composer/Librettist Derrick Wang’s one-hour confection distinctive, entertaining, and evocative.

As most informed Americans would know, Supreme Court Justices Antonin Scalia and Ruth Bader Ginsburg were judicial titans representing the opposite ends of the political spectrum.  Scalia, a conservative originalist, believed that the Constitution should be denoted by its meaning at the time it was written, and that granting rights that were not included in that document was unconstitutional.  Ruth Bader Ginsburg represented rational minimalism which builds slowly on existing precedent, but she also believed that certain rights related to gender, gender preference, and race are unalienable even if not specified by the Constitution.

Yet these philosophical opponents were dear friends for whom the rapidly fading maxim of American Democracy, “We are different.  We are one.” applied.  Their most known common bond was their mutual love for opera.  They also came from immigrant communities that suffered discrimination – Ashkenazi Jewish for her and Sicilian for him (the same as my wife and me!)

Renaissance man Wang is a former lawyer who has crafted a libretto built around the judicial opinions of the protagonists.  Presumably evidencing the composer’s own political bent, the bigger barbs are targeted at Scalia, whose behavior is largely defined by his frequent grandstanding, intemperate criticism, and name calling of his colleagues when in disagreement.  In the operatic equivalent of Dan Ackroyd’s berating Jane Curtin long ago with “Jane, you ignorant slut!” on SNL’s “Point/Counterpoint,” Scalia repeatedly mansplains Ginsburg with “You don’t understand the Constitution!”  Christopher Benochea captures physical appearance and self-indulgent fatuousness of Scalia that works like a charm.  Although his tenor voice lacks matinee-idol lyric quality, the more dramatic tone suits his role extremely well.  And when required to quick sing and patter the high notes, he is up to the task.

Meanwhile, the focus on Ginsburg deals more with her achievements and her arguments for equality.  Nikki Einfeld is Ginsburg, and she matches Bengochea in characterizing the persistent and beloved RBG.  Einfeld possesses a fine coloratura instrument, and she puts it to great use in several demanding passages.

To add vocal dimensionality and depth to the proceedings, the composer creates a spirit in the spirit of The Commendatore from “Don Giovanni” who arrives to act as a judge of judges. Not surprisingly, this role calls for an authoritative bass, and Kirk Eichelberger provides the answer most effectively.  This Commentator pillories Scalia for professing constitutional originalism, which should be agnostic with respect to the outcomes it produces, yet with his sophistry, it seems to always result in politically conservative votes and opinions (Bush v. Gore?!?!)

So, what about the score?  In the service of broad comedy, it works extremely well.  The original music is pleasantly melodic, and it integrates nicely with the borrowed.  Beyond a pastiche, it is more a mash-up with snippets from “La Traviata,” “La Boheme,” “Der Rosenkavalier,” and several others.  Einfeld as Ginsburg even delivers a delightful bluesy aria with a nod to “Carmen.”  While the comforting familiarity of these tracts makes us smile in recognition, they act as demerits in considering the noteworthiness of the overall score.

The libretto illuminates for those less familiar with thoughts of the two great jurists, though there are also unembellished references to case laws that won’t resonate with most of the audience.  The lyrics are crisp and clearly articulated by all three artists.  Another mixed blessing is the conspicuous use of heavy rhyming in sequences, so that the words themselves are funny as well as the situations that they represent, but they can also seem a bit kitschy.

A final note about this production is Peter Crompton’s scenic design, which is quite impressive for an opera with only two performances.  Greek columns, desks, and a podium appearing like richly colored cherry wood convey the grandeur of the Supreme Court, and full back wall projections add a variety of content and looks to open up the stage.

Although the opera premiered in 2015 when both justices were still alive, sadly, they are no longer with us.  Wang amended the score after Scalia’s passing, adding a moving finish in recognition.  Karin, my wife and editor, and I were fortunate to see RBG at Santa Fe Opera in both of her last two years visiting one of her, and our, favorite escapes.  There was magic in the air when the unlikely small, frail-looking, old woman was around.  She is missed.

“Scalia/Ginsburg” with music and libretto by Derrick Wang is produced by Solo Opera and plays at Lesher Center for the Arts, 1601 Civic Drive, Walnut Creek, CA through September 12, 2021.