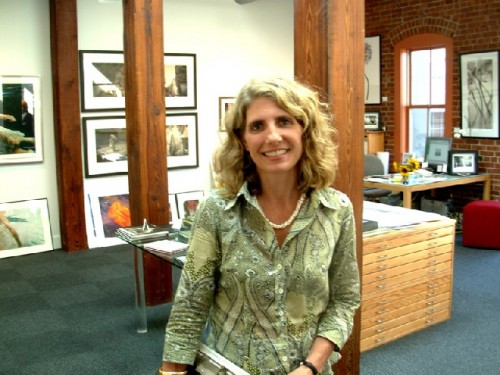 Alison Collins is in her fourth year of running Iris Gallery. Giuliano photos. 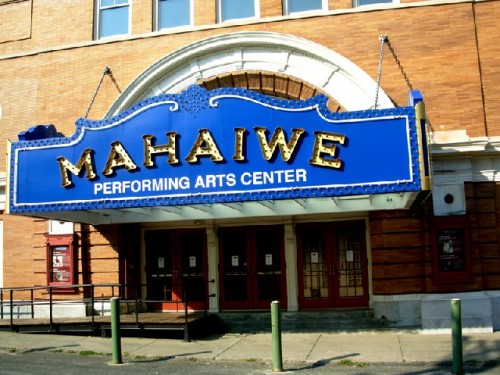 The Mahaiwe Performing Arts Center is a major attraction in Great Barrington. 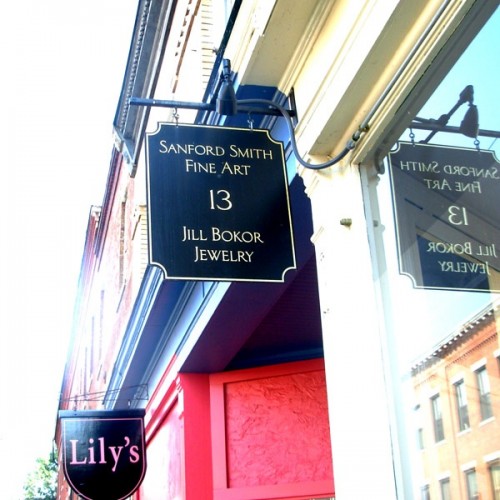 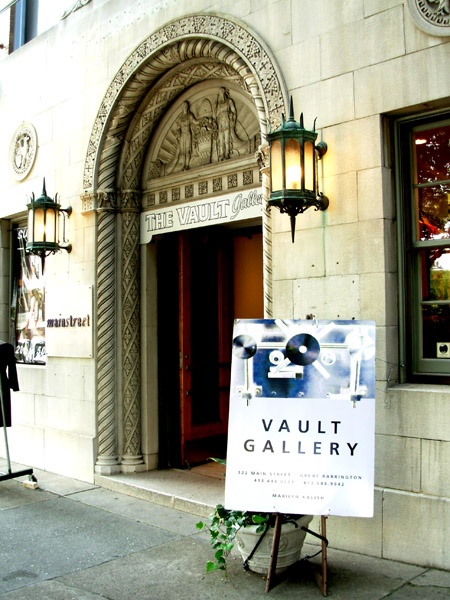 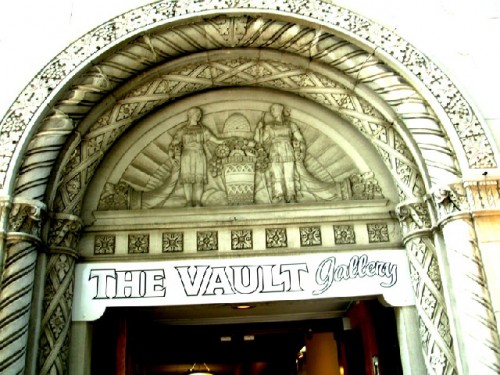 The tympanum over the door of Vault Gallery. 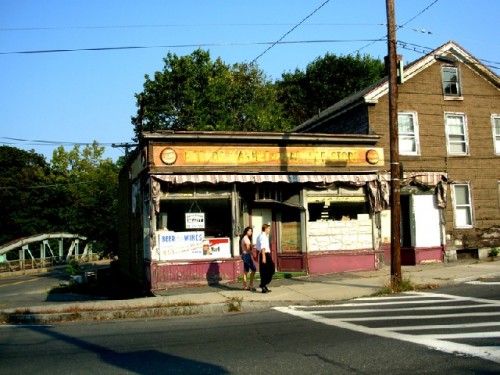 This store on the main drag has known better days. 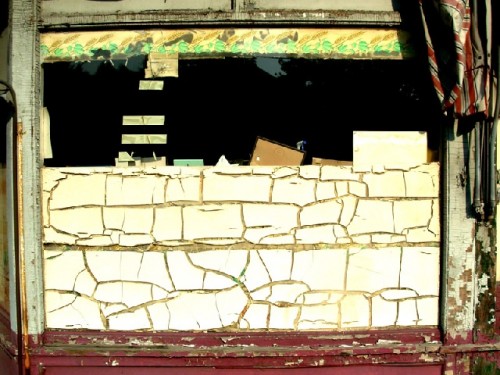 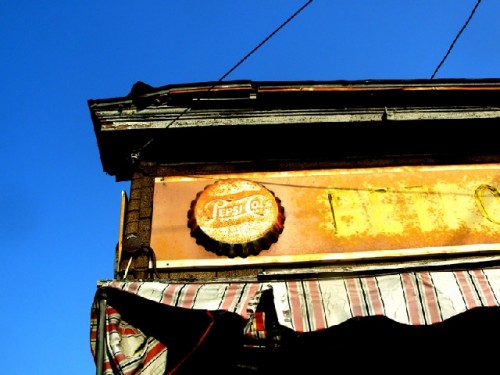 Pause for a Pepsi. 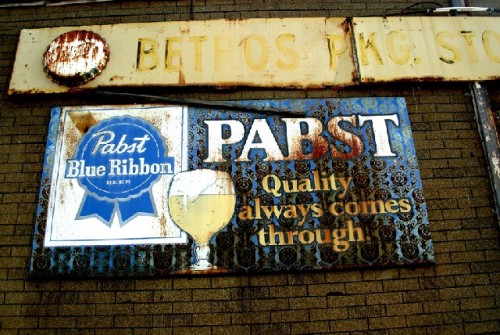 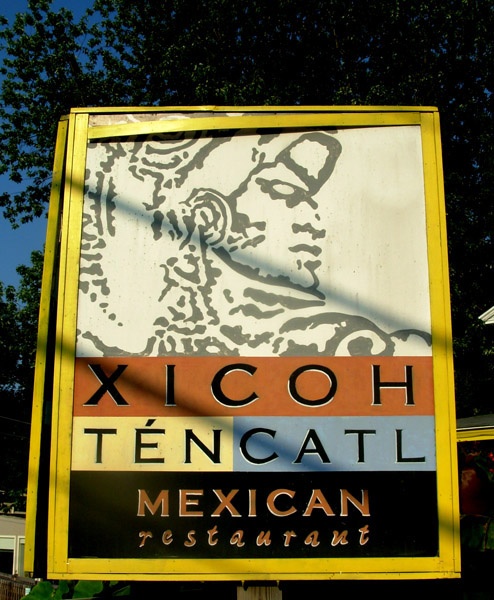 XicohTencatal is located just out of town. 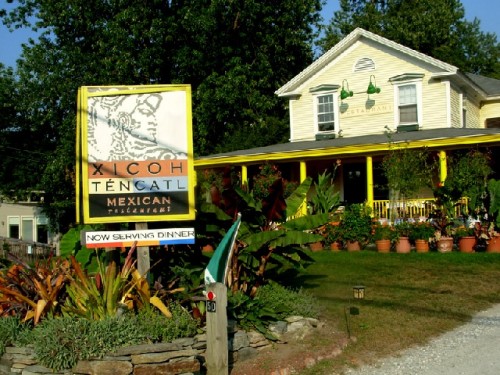 The restaurant is surrounded by lush plantings evoking a tropical ambiance. 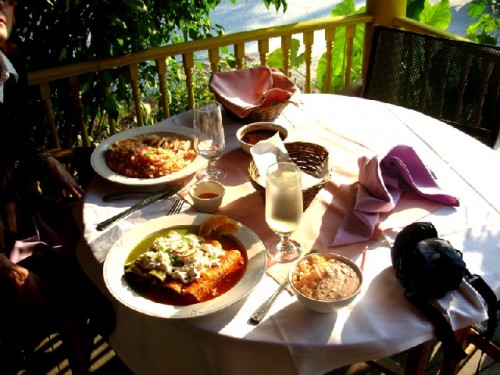 We much enjoyed our tasty dinner.

It was a perfect September day when we drove about an hour from Adams to meet with Alison Collins the director of Iris Gallery in Great Barrington. While the purpose was a business meeting it was combined with the pleasure of gorgeous scenery and a nice culinary diversion including dinner at Xicoh Tencatl, a Mexican restaurant recommended by friends, and  dessert at Spice in Pittsfield.

During the early afternoon on a Thursday there wasn't much foot traffic on the spacious second floor with a long connecting corridor and two exhibition spaces. Initially the office of Berkshire Living was next to Iris Gallery but the successful magazine outgrew their office and Collins subsequently renovated and broke through a wall to connect the areas into some 2,000 square feet.

After an initial introduction we explored the current exhibition "Doug Landreth: Panoramas & Landscapes, Butterflies, Botanicals and Beetles" which is on view through October 1. Collins was busy on the phone. Three phones actually. Which never stopped ringing. Her desk was covered with small slips of blue paper on which she was taking notes on orders from clients for a new release of works based on animal studies in Africa by Nick Brandt from the series "On This Earth."

Looking up somewhat breathlessly she explained it had been like this all day from the first moments of opening the gallery in the morning. Iris is one of ten galleries which represent the British artist who frequently shoots on location in Africa producing gorgeously rich, black and white prints in a variety of editions and sizes. Each of Brandt's several galleries is allowed an alloted number of prints to offer and the sense was that they would be sold out by the end of the day.

With considerable tact she informed callers of what was available and on certain items that she would "try" and how high were they willing to bid if that piece became available. One of the artist's most popular images, an elephant in profile exuding a fog of dust, in the largest format was offered for $30,000. It was one of the last three of that image available for sale. Believe me, even at that price, it was tempting. It is a fabulous photograph.

When you have a day like that the relatively slow foot traffic doesn't really matter. Like many Berkshire based entrepreneurs she commented that it had been a generally off summer which picked up at the end of August. She pointed out that Brandt is the best selling artist that she represents. But that, now in its fourth year, the gallery is well established and has a strong clientele of New Yorkers (a two hour commute) who have second homes in the area as well as from Boston which is equidistant. It is routine to make deliveries and assist in installing works in both locations. She is in the process of starting a new outlet for the gallery at 70 Charles Street in Boston.

Iris Gallery opened in May of 2004 at about the same time as four other galleries. Recently the dealers got together to print a brochure called The Great Barrington Art Walk. It includes a stylistic mix of venues but with sufficient critical mass to deserve serious attention. The galleries as listed in the handout include: Berkshire Art Gallery, Jill Bokor Jewelry, Gallery Eight, Godwin & Lundquist Fine Art, Iris Gallery of Fine Art Photography, Kasten Fine Art, Iascano Gallery, Sanford Smith Fine Art, Vault Gallery and Geoffrey Young Gallery. They often combine openings drawing a lively crowd. Great Barrington is also home to the Mahaiwe Performing Arts Center, in a renovated vintage movie palace. And some 20 restaurants are listed on the brochure offering a range from cafes and bistros to ethic restaurants and elegant dining.

In the midst of all those phone calls Collins graciously took time to sketch out just how and why she became a successful dealer in fine art photography.  She and her husband, Fred Collins, moved to the Berkshires full time eight years ago. He has founded Berkshire Digital which produces archival pigment prints and provides a variety of related services. He designs the handsome announcements which have become collectables.

"I was in commercial photography and advertising," she explained. "I studied photography at the Art Institute of Chicago and the Philadelphia College of Art." While she was still a high school student she spent a year as an intern in a commercial photography studio. "I learned so much that when I went on to art school it was not fast enough for me. In the commercial field I was a photographer's rep and did production for shoots including booking models and props as well as securing locations. I had a finger in everything."

Many of the commercial photographers she worked with also created fine arts portfolios. The inspiration for Iris Gallery was to show that aspect of their work. Typically, the work she shows combines pristine production values, gorgeous color, glamour, and accessibility. The work covers a range from landscapes through still life and tasteful figure studies. The next exhibition, from October 5 through January 3, will combine the black and white, silver gelatin landscape panoramas of Brian Kosoff with the "Painted Ladies" series of the Canadian artist Barbara Cole.

Leaving Iris Gallery it was late in the afternoon. We walked about a bit visiting Sanford Smith, but the organizer of New York based art fairs was not around. It would have been fun to chat and catch up. We also much enjoyed the unique space of the Vault Gallery which occupies a former bank. However,  I was not much taken with the fluid, hasty, ballet inspired paintings and drawing by Marilyn Kalish.

It was time for dinner at Xicoh Tencatl at 50 Stockbridge Road on Route 7 on the way out of town. We were hungry but a bit early for dinner as the Mexican restaurant, owned by Angel and Toni Espinoza, was just setting up. Given the option we decided to take advantage of perfect weather and dined on the porch surrounded by an array of plants that provided a suitably tropical ambiance. That was somewhat jarred by a  waiter with a distinctly Russian accent and manner.

We shared a wonderfully fresh arugula salad. I ordered the house margarita which proved to be cheaper than designer versions but too generic. It was watery, lacked lime and an appropriate punch. For several dollars more there was an extensive selection of top shelf versions. But given the specialty of the restaurant one expects a bit more from the house margarita.  Our dinner order was fairly conventional but proved to be enjoyably satisfying. My plate of enchiladas combined two chicken and two beef with a nice sauce and condiments. The accompanying rice and beans was not what I am used to having dined in many of Boston's neighborhood Hispanic restaurants. The rice seemed overdone, too soft, and the beans were refried. Not my idea of first class rice and beans. Astrid ordered the Mole Poblano with the mole sauce on the side. It was rich and slightly spicy. The fresh salsa and home made chips which accompany the meal were great.

Next time we visit Great Barrington, hopefully fairly soon, we will be eager to check out other dining options. But we would surely recommend and return to Xicoh Tencatal. When it comes to great Hispanic restaurants, however, we sure do miss East Boston. Overall, the Berkshires tend to be a bit light on ethnicity. Oh well.