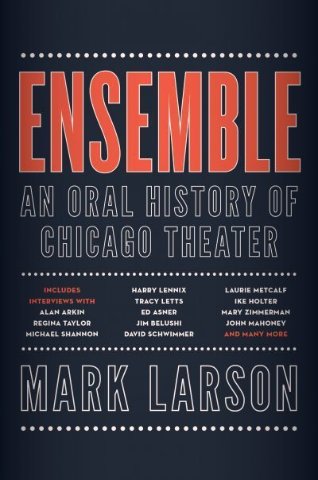 Ensemble: An Oral History of Chicago Theater is a book you can enjoy in two ways. You can read it from beginning to end, as you would any narrative of fiction or nonfiction. Or you can dip in and out and read Mark Larson’s marvelous interviews with theater people in any order—and to any stage of completion—that you like. At almost 700 pages, the book is a bit of a doorstop, but it’s not Gibbons’ Decline and Fall of the Roman Empire. Author Mark Larson has interviewed nearly 300 theater people—actors, writers, directors, designers, producers, even critics. They reminisce about their lives in theaters, past and present, their financial and venue problems, their memories of successes, failures and often-hilarious backstage incidents. The backstage stories do not make this a book of gossip, however. It’s a pretty straightforward story of theater creators’ memories and inspirations.

Larson’s interviews were done almost entirely in person, recorded, transcribed and lightly edited. His goal, he says, was to retain “the individuality of the interviewees’ speaking voice and the intention behind what they were saying.” He succeeded, as I agreed when I read his interviews with people I knew and saw perform at theaters I remember fondly. Larson captures many humorous and poignant stories. These were some of my favorites.

There’s a don’t-miss Steppenwolf Theatre chapter in a section titled “Institutions Take Root.” Interviews with Rondi Reed, Gary Sinise, Jeff Perry, Alan Wilder, Terry Kinney and Laurie Metcalf, among others, flesh out the well-known stories of how Steppenwolf got started in . A later chapter on “Steppenwolf Comes to the City” brings us to the Jane Addams Hull House years, starting in 1979. The late John Mahoney, who joined the company at about this time, tells about his decision to get together with these “kids with a dream.” His St. Nicholas Theater acting teacher was a little hesitant. Mahoney says, but “They [the Steppenwolf crew] were excited, because all of a sudden they had somebody to play the parents and older characters! That was really how I got involved in Steppenwolf. And I was there right from the start. I helped to scrape the floors [at Hull House] and sell [at] the box office.”

You can also enjoy the story of ’s iconic 1985 production of Hamlet, directed by and starring Aidan Quinn. The play started out in the location and later moved to the Civic Theatre. This Hamletwas done in a highly contemporary style, using technology of the time. The extraordinary acting and direction seemed to get at the heart of Hamlet’s persona and soul. If was a memorable theatrical and visual experience. But Kevin Gudahl, who played Laertes and one of the players, tells one of those backstage stories. It happened after the play-within-the-play ended. As part of the scene, the actors are celebrating, dancing and jumping and Gudahl jumped too enthusiastically, hit his head on a low exit doorway and cracked his skull. Despite profuse bleeding, he went on and finished his role as Laertes, wearing a beret to control and cover the wound. (By the way, at the end of the play scene, the sound designer played Talking Heads’ “’Burning Down the House.”)

I loved reading the chapter on Famous Door Theatre. Dan Rivkin and Marc Grapey talk about founding Famous Door and opening their first production in a former laundromat in . A warm review by critic Richard Christiansen got them started. You can follow them to their five years at Hull House and then to the , and sympathize with Rivkin as he cleans out his 401k to buy lighting and sound equipment.

Among their finest productions were Joshua Sobol’s Ghettoin 1999 in the and, in a glorious finale, the two-part, six-hour production of John Irving’s Cider House Rules at the old , now the , in 2003. The production, which won many Jeff Awards, wasn’t intended to be a finale, but the 30-actor cast and other expenses were not supported by enough fund-raising. That caused the eventual demise of Famous Door. I was a board member then and it was an emotional and wrenching ending, as Laura T. Fisher, then artistic director, describes: “I can’t even talk about it without weeping. One of the most glorious things I’ve ever seen…. It was a theatrical miracle, the kind of thing that can only happen, I imagine, in .” But it meant the end—a classic theater story.

Beata Pilch, now artistic director of Trap Door Theatre, talks about her childhood in and her Polish-born mother sending her to the family’s native Polish village every summer. It was in one of those summers that Pilch first discovered theater in Zakopane. “I walked into that theater and it changed my life,” she says. Later she was able to form her own company and committed it to the work of contemporary European playwrights, often premieres. She fell in love with the writing of Stanislaw Witkiewicz; since then, Trap Door has produced five of his plays. A developer friend who was working in Bucktown helped Pilch find the space where you can find Trap Door today: a tiny theater, formerly a machine shop, at the end of a gangway on .

Pilch’s interview merges into the voice of Yasen Peyankov, a native of and co-founder of the late lamented European Repertory Company. He and Carolyn Hoerdemann talk about the early years of what became European Rep, performing Brecht’s Mann Ist Mann at Urbis Orbis coffee shop on near Damen and then staging plays in the cellar at Café Voltaire on . The company moved to the in 1992, where Timeline Theatre has performed more recently. Peyankov is now a member of the Steppenwolf ensemble.

In Larson’s history, as in many stories of theater, everything starts with Viola Spolin and her theater games. Larson and his interviewees tell this story in the initial section, “The Past Is Prologue” in a chapter titled “The Offspring of Viola Spolin.”

Spolin’s groundbreaking 1963 work, Improvisational Theater: A Handbook of Teaching and Directing Techniques was an important tool and reference for many theater people then and now. The book was the result of a lifetime of Spolin’s work, teaching as part of the progressive education program at Hull House. Her son, Paul Sills, and his friend, director David Shepherd, used those techniques to work with actors and creators starting in Hyde Park as the Playwrights Theatre Club, then moving north to form the Compass Players and eventually .

Many theater histories do start as Larson’s does, in 1953, but there was professional theater in long before the rise of improv and sketch theater in . The Goodman Theatre, for instance, grew out of the “little theater” movement in the early years of the 20th century, and opened as a professional theater and theater school in a venue on the east side of the Art Institute in 1925. The early history of theater in (mostly touring stock companies) and the beginning of the Goodman Theatre were chronicled in Stagestruck City, an exhibit at the Newberry Library in 2015.

Larson spent many years in peripheral roles in and around theater; he is an educator who has worked at the and the Lincoln Park Zoo and now is professor of education at . He also records and collects people’s personal stories on his website, American Stories Continuum.

Ensemble: An Oral History of Chicago Theater (2019) is published by Midway Books, an imprint of Agate Publishing. You can buy it from the publisher or your favorite bookseller for about $35. You can read an interview with the author.