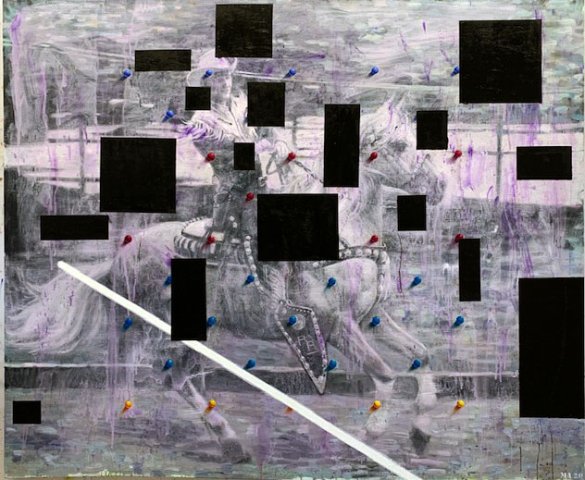 Roy and Tigger with suprematist deconstruction. Oil on canvas, 2020, courtesy of Miroslav Antic. All rights reserved by the artist. 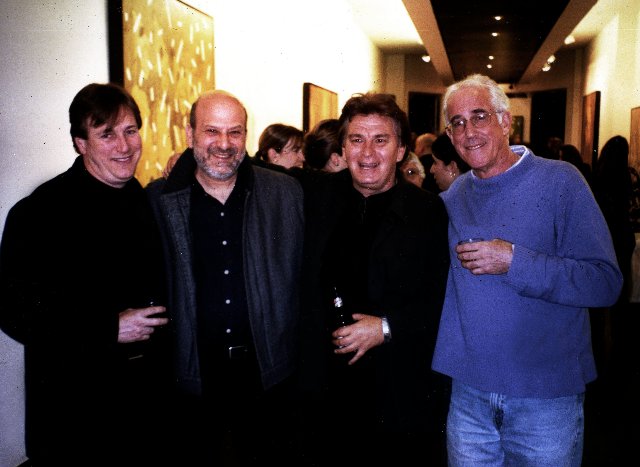 Initially, I covered the exhibitions of Miroslav Antic and later curated  him in shows.

Some time ago we both moved from Boston. There was a market for his work in Florida. Much stronger than the often-tepid response of Boston collectors. He followed the money and has done well ever since. Covid has chilled sales for now but he is taking the down time to replenish inventory.

Other than food shopping  and walking the dog most of his time is spent in the studio of his West Palm Beach home. Right now, he lives alone but that seems OK. A few times a year he drives to Miami with its thriving galleries, museums, and art fairs.

When he first moved, he made lots of calls to pals back home. That gradually tapered off. Not to say that Miro, as his friends call him, is anything but a loner.

It had been too long when we connected recently with a lot of catching up. The good news is that he lives well, exercises, and eats sensibly. Although he is near the coast he reports rarely spending time at the beach. When he first moved he expected to be in the water year round.

As they say about travel, no matter where you go, there you are. Paradise has a way of becoming quotidian.

I know West Palm Beach quite well from  many years of visiting my mother for holidays. She had a condo in Palm Beach a shorth distance from West Palm. We discussed my many visits to the Lannan Foundation in a renovated movie theatre. The former AT&T executive collected artists in bulk.

It was normal for him to buy the content during a studio visit. Or buy out an exhibit of an emerging artist. There was intriguing depth on view of Morris Louis, Lester Johnson, Robert Longo and Julian Schnabel.

The Foundation moved and the space was taken over by Palm Beach Junior College.

Also in West Palm Beach is the Norton Gallery with sculptures by Gloucester’s Paul Manship and a wonderful Gauguin from the Pont Aven period. Miro told me that the museum has expanded with significant traveling shows.

Some years ago one of the best shows I curated for the gallery of New England School of Art & Design/ Suffolk University was Los Cuatro Grandes.

It was a riff on Mexico’s Los Tres Grandes, the muralists Orozco, Rivera and Siquieros.

My Boston four big guys were Miro, Domingo Barrares, Gerry Bergstein, and Robert Ferrandini. Three of them taught at the Museum School while Ferrandini moonlighted as a blues/ rock musician. Bob’s band performed for my 50th birthday at the spacious Equus Gallery in Chinatown.

Those dudes are awesome artists and never got the respect they deserved.

Just before we were ready to install the work Bob had a stroke. There was some question as to whether he would be able to be in the show. Gallery Naga made sure it happened. Since then he has mastered painting with his other hand and the work continues with his approach to the sublime.

As European born and trained artists Miro and Domingo brought a different, rather Baroque sensibility to their complex paintings. During the Grandes era Domingo was quoting and improvising on Velasquez.

Cripes how I loved that show. But I caught a lot of crap for celebrating four guys. That, however, was bogus as at least half of my program featured wonderful women artists.

Covering Miro over decades there has been constant change and experimentation. The first show I recall was at Lopoukine/ Nayduch on Congress Street.

The paintings were very sexy with realist, Old Master rendering dissected with strips of neon. A memorable work deconstructed the Mona Lisa. They were just wonderful and collectors responded well.

That was abandoned and followed by more abstract paintings some of which seanced memories of graves and arrangements of funeral flowers. It’s what I included in a traveling show Subjective Abstraction.

Skill and facility of rendering has long been a feature of the work. As a progressive artist, however, Miro has never been content with realism. That may be a bottom line, but just the starting point. We readily recognize the subject matter but then struggle with the how and why of what comes next.

From the Smith show I was intrigued by “My Uncles.” They are rendered from a snapshot in bathing suits. I have almost identical images of my dad and his brothers at Coney Island. Which is perhaps what intrigued me. It raised issues of how to use family and nostalgia in art. We all have those memories but few ever get to act them out creatively.

Of course, Miro was ‘doing something’ with those images. There was an era of nostalgia invoking monochromes like cheap colored prints. Over which were bubbles of varying scale. The bubble painting, since retired, sold well in Florida.

The norm for the best artists is to abandon or even f-bomb success. The mantra is that if they ‘get it’ I’m not trying hard enough.

We discussed the new work and he sent an image of “Roy Rogers and Trigger."

It totally exploded what’s left of my fragile mind. Given my age and deeply rooted childhood memories it hit the bullseye.

As a kid in the 1940s I grew up during the transition from radio to television. Cowboys and Indians were a huge part of my life: The Lone Ranger and Tonto, Gene Autry, Straight Arrow, Hopalong Cassidy, Tom Mix, Bobby Benson and the B Bar B Riders, and of course Roy Rogers and Dale Evans.

Mom’s pal and family friend, Alice Moran, took me to FAO Schwarz’s for Christmas. I pleaded for a double holster with two six-shooters just like Hoppy’s.

I spent hours each day practicing quick draw when facing Billy the Kid, Jesse James, or some other badass hombre. Of course, I shot the bad guys on TV.

The new painting is a knockout. All the TV cowboys had famous trick ponies. Roy's was a gorgeous golden Palomino stallion.  I saw cowboys perform when rodeos came to the old Boston Garden. Even managed to get Gene Autry’s autograph which is pasted into one of my scrapbooks.

In that familiar monotone Roy and Trigger are meticulously rendered with all their special gear. Trigger is rearing up, showing off just like at the rodeo. Instead of bubbles the “try something else” this time is an arrangement of black rectangles of varying scale. The reference is to Russian suprematism. Which kind of makes for a lonesome cowboy.

It’s been decades since I last thought a twit about Roy and Trigger. Here are the essentials.

He was born Leonard Franklin Slye (1911-1998).  He was known as the “King of the Cowboys.”  He appeared in some 100 films with nine years on radio, and from 1951 to 1957 on television with his wife Dale Evans. He owned his own marketing and brand name with a product line second only to Disney. There is a fast food chain named for him. He had numerous comic sidekicks including Pat Brady, Andy Devine, George “Gabby” Hayes and Smiley Burnette. He campaigned for Barry Goldwater.

As Roy would say “Happy Trails” and thanks Miro for a stroll down memory lane.