The Three Day Festival Is In Full Swing 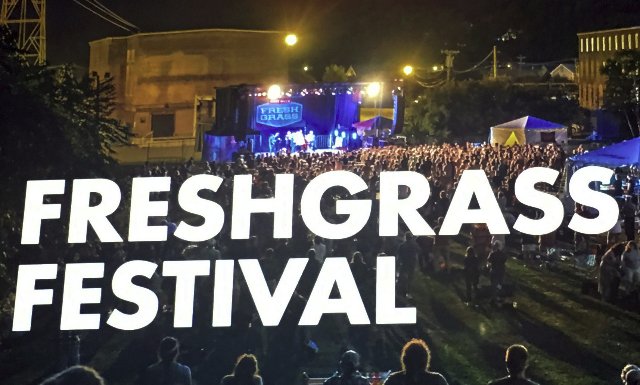 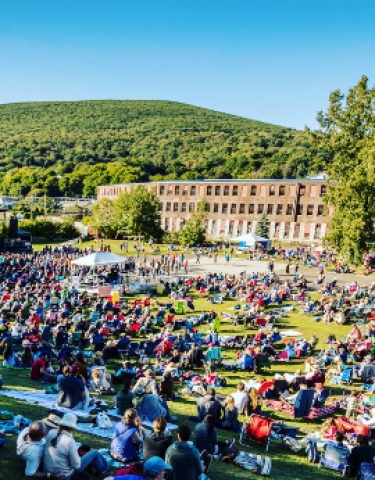 The first day of the annual three day ‘Fresh Grass’ festival started with a bang. Doors opened at five.

At five past five the music started flowing in Courtyard C, with the Berklee American Roots Music Program. At six, on the same stage Pinedrop performed. Pinedrop, from neighboring Brattleboro, Vermont has a fresh Americana sound that pushes the button between folk and bluegrass.

It was time to move to Joe’s Field and set-up my folding chair and find a spot to view the next act, ‘The Lonesome Days.’ As I found a spot, I realized that I was just in time to secure a spot close to the outdoor stage. The field was filling up quite quickly. Were they coming to hear The Lonesome Days? Or were they setting up chairs for the following two acts,’ Delta Mae’ or the headliner, ‘Trampled by Turtles.’

As it so happens, the crowd came for The Lonesome Days, a Denver based bluegrass band whose genre is Colorado bluegrass. Jonny Miller, their mandolin player has a beard that makes you wonder how much hair you can grow on a face. The bluegrass band is made up of the fore mentioned mandolin player plus a guitar, banjo and an upright bass.

Their soulful music won the 2017 Fresh Grass Band Award. It didn’t take long for this band to evolve into a four piece ensemble. The Lonesome Days started in 2014 mixing original music with timeless classics. In fact, their electrifying sound has built a loyal following, hence, the large crowd.

The Lonesome Days have been finalists, two times, in the renowned Telluride Bluegrass Band competition.

Joe’s Field was full, much like the nights when WILCO fills the meadow. And tonight’s second star was the weather, cool, yet comfortable with the man in the moon looking down at us. And if the man in the moon has ears, he would have heard the eight o’clock headliner, Delta Rae, from Durham, North Carolina. The band consists of three Holljes siblings and three unrelated friends. Starting out in 2009 with four members, the band has grown both in both size and popularity. Delta Rae is not a band member, but, a fictional character the siblings mother made-up for a book idea. The book was never written, but, the name stayed as the band's name.

Delta Rae’s hour set had fans dancing on the grass. Their professional showmanship and catchy lyrics scanned the blues, folk, roots and country rock spectrum. I did get to talk to a band member who informed me that they played at Farm Aid in 2014. Delta Rae has star quality everywhere and peaked in this arena.

The crowd was in a good mood to greet the nine fifteen headliner, ‘Trampled By Turtles’, a Duluth, Minnesota bluegrass, folk-rock band. They have released eight albums, of which three have reached the US Billboard number one spots.

The band debuted in 2003 and played riveting music from many genres including, indie, folk, alternative country and bluegrass.

Tonight’s concert focused on the five band members attributes: harmonica, fiddle, banjo, mandolin, bass, voice and guitar. To their credit, Palomino, their fifth album, maintained a position of Top Ten in the bluegrass charts for 52 weeks  in a row.

The staff from Mass MoCA that puts this festival together, year after year, has a knack  of introducing the cream of the crop to the loyal audience at the Fresh Grass Festival.