The Gifts You Gave to the Dark 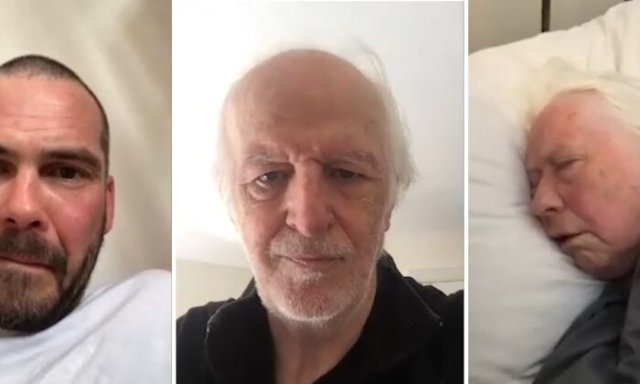 What are some “gifts” that you’ve brought to dark, anxiety-inducing times, places, or situations?

Perhaps you smiled brightly while visiting a lonely, scared person forced to spend quarantine alone because she has no family or friends. Maybe another gift was your warm, re-assuring voice. Or, perhaps your gift was as simple as your shoulder, upon which that lonely individual could lean and cry.

In Darren Murphy’s relatable, touching, sad, funny, and ultimately cathartic play The Gifts You Gave to the Dark, the title comes from lyrics comprising the song “The First Time Ever I Saw Your Face.”

At first glance, you might wonder about the title’s significance. But watch the play and think about it for a while, and it’s clear that Tom brings at least one gift to the dark situation of the play. Specifically, Tom brings his joy-filled voice to a live, virtual conversation with his elderly mother as she lie on her death bed. As his mom, Rose, lie dying, Tom relates a happy moment the two shared during a journey. Look closely, and it appears that the otherwise sleeping and unresponsive Rose nods her head in response to her son. Perhaps Tom’s story, or the way he told it, brought her out of her state — even if just for a second. Undoubtedly, storytelling is in our DNA.  It’s a tradition that dates back to the cavemen days. It can excite us, unite us, and perhaps heal us in some ways.

The power of story to offer comfort in even the bleakest times is a theme in Murphy’s play. It is experiencing its world premiere on The Irish Repertory Theatre’s YouTube channel, and will remain online through Oct. 31. There is no cost to watch it. The playwright penned the piece specifically for digital media, in response to the COVID-19 pandemic.

Indeed, The Gifts You Gave to the Dark speaks to today, when people are longing for human contact and connection during quarantine. Surely, many of us wish to talk with someone who is as easy to speak with as Tom’s uncle, Larry. And how fortunate we are that technologies exists which allow us to connect during a time when gathering in person is dangerous.

The story that Tom tells his mother at her deathbed, via FaceTime, might be a “Belfast story,” as a synopsis indicates. And the producing company is New York’s Off-Broadway Irish Repertory Theatre. Its mission is to provide a context of understanding the contemporary Irish-American experience through evocative works of theater, music, and dance. But the tale that Murphy relates through his play is a universal and particularly timely one.  Indeed, sooner or later, all of us will have to face the living nightmare of saying goodbye to a loved one. And in this age of COVID-19, we might not be able to do so in person. But even via Zoom or FaceTime, what do we say to someone who is dying? And is there an afterlife or “home” that exists for people after they die.

These are some of the questions that Murphy poses in his play.  The playwright doesn't offer easy answers, and even ends the play on a question mark. All of this reinforces the uncertainty in life.

Murphy's play is 24 minutes long and its plot is noodle thin. But within those 24 minutes, Murphy offers a play that is heartfelt and moving. Further, it’s unpretentious, brutally honest, but with enough humor to make watching the play bearable.

In the piece, set in present-day Ireland, Tom is stricken with COVID-19. Therefore, he is unable to visit his mother in person. So, uncle Larry calls him via FaceTime so the younger man can speak with his mother one last time.

The tension is palpable; time is running out – Tom’s mom could die any second. Therefore, he’s trying to recount as much of his true story as possible before Rose is gone. To make matters worse, Tom’s coughing fits get in the way.

The actors, under Caitríona McLaughlin’s assured, sensitive direction, are superb. They disappear into their characters, investing each word, gesture, and expression with impressive spontaneity. Marty Rea, as Tom, battles not just his character’s coughs, but seemingly death itself. He’s trying to keep death away from his mom at least until he has finished his story. As Tom tells the story, Larry interrupts a few times, apparently to warn his nephew that Rose is getting close to death. But a desperate Tom, as though on impulse, demands that his uncle (or death) wait. During other moments, Rea’s Tom, flashing a wide smile, speaks to mom in a joyful, optimistic voice. It is filled with genuine love. By contrast, during the play’s opening moments, Rea’s Tom is convincingly worked up. With blinking eyes, he looks up as though he’s searching for words.

Speaking of words, Tony Award-winning actress Marie Mullen, as Rose, doesn’t say anything throughout the play. But Mullen makes convincing snore-and choking-like sounds. They can be frightening to hear, reminding us perhaps that Rose is close to death. The playwright never mentions what ailment Rose has, but we might assume she's dying of natural causes.

How we react to an impending death, or one that has happened, is a topic that the playwright addresses. Sean McGinley lends Larry a peaceful, quiet resignation before and after Rose’s passing. McGinley’s Larry is a solid rock of comfort. However, convincing gravity fills his voice when necessary, like a grave-sounding doctor delivering bad news. Also, McGinley conveys a weariness suggesting he has stayed up nights with Rose. But tears don’t escape McGinley’s Larry. On the other hand, Tom chokes up at least once.

Murphy has written this play with simple language. There’s nothing pretentious about it or the piece. Moreover, we can relate to these characters. However, we’d relate even more if we knew more about them. Other than learning that Tom once auditioned for a part, we learn nothing about him, Uncle Larry, or Rose. As a result, these are largely underwritten characters. Certainly, Murphy has room to flesh them out; the play runs less than 30 minutes.

With that said, this play is packed with the power to move audiences. And it can lead them to think about their own “gifts” that they’ve brought to dark, discomfiting situations.

The Gifts You Gave to the Dark remains online at https://www.youtube.com/watch?v=Q_4M4cbP1OM&feature=youtu.be through Oct. 31.