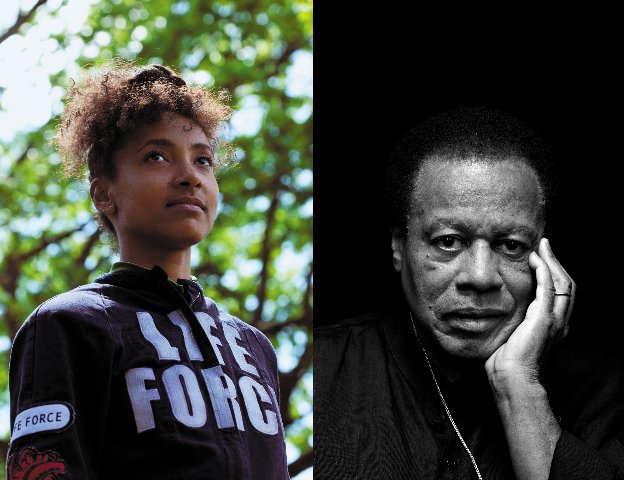 In Iphigenia, two of the most visionary and daring musical voices of our time—composer Wayne Shorter and librettist and performer esperanza spalding—have created a modern operatic re-imagining of the ancient tale of a daughter sacrificed to the gods. Against a set designed by luminary architect Frank Gehry, classical and jazz forms collide in a full orchestral score, while a deeply poetic and radical libretto sees Iphigenia herself multiply and stare down opera’s history. Shorter and spalding’s Iphigenia is not so much an adaptation as an intervention into myth-making, music, and opera as we know it.

These preview performances will take place following a two-week residency at MASS MoCA, before Iphigenia debuts as a traveling operatic performance.

Nine vocalists, including spalding, will lead a local 10-person chorus and chamber orchestra, accompanied by Brian Blade, John Patitucci, and Danilo Pérez from the Wayne Shorter Quartet, and Jeff “Tain” Watts. The production is directed by Obie Award-winner Lileana Blain-Cruz, and conducted by Clark Rundell with scenic design by Frank Gehry, costume design by Montana Levi Blanco, lighting design by Jen Schriever, and sound design by Mark Grey. A cappella vocal arrangements are by Caroline Shaw, and additional text by Joy Harjo, Safiya Sinclair, and Ganavya Doraiswamy. Iphigenia is produced by Jeff Tang (Executive Creative Producer), Cath Brittan (Producer), and Mara Isaacs (Octopus Theatricals, Tour Producer). The opera is made possible by Real Magic, a company created by spalding and Tang, to develop Iphigenia in an environment of radical experimentation and open collaboration.