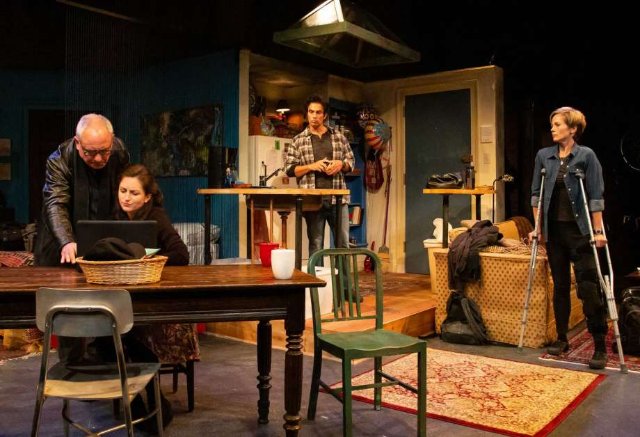 Sarah Goodman (Tamara Hickey) and James Dodd (David Joseph) have been life and professional partners covering war zones for several years. Suffering a breakdown he left early leaving her in harm’s way as a combat photographer.

A roadside bomb left her badly injured and near death. The incident killed her “fixer/ interpreter” Tariq. Apparently, they were more than colleagues. The Donald Marguiles, award winning play Time Stands Still has her limping home to their Williamsburg, Brooklyn apartment. The design by John McDermott is bare bones functional reflecting that they are not around that often.

It soon is apparent that after basic rehab she is intent on getting back in the fray. The reasons behind this inner drive are complicated including liberal guilt as the daughter of a wealthy, right wing, estranged father.

James argues that now that she is back home they should settle down, get married and, good grief, start a family. While she was in a coma, with no legal status, he had to call Palm Springs to make medical decisions.

Having arrived home she wants to postpone a well meaning visit by Richard (Mark Zeisler), a long ago lover and her photo editor at a news magazine. With bluster and blunder he arrives with Mandy (Caroline Calkins). There are hugs and an awkward introduction.

Inevitably, Sarah politely asks “and what do you do?” They are hard core journalists while she is an events planner. What happened to Astrid is politely broached? Proclaiming true love after three months it is revealed that Richard is just three years younger than her father.

Generally fine performances by the four actors and apt direction by Nicole Ricciardi have been squandered. In 2009 it was nominated for two Tony Awards for Best Play and Best Performance by a Leading Actress in a Play for Laura Linney.

A decade later much has changed as the writing feels dated, contrived, self deprecating and not all that amusing. Compared to bravery and professionalism the child bride has been written as an airhead. With no life experience or a shred of insight she blurts out all the wrong lines. They are played for laughs but also ring true. There is the time honored tradition of the fool in theatre but here the character is simply foolish.

Richard asks to see the latest images on Sarah’s laptop. Mandy asks for permission to look on but then crassly steps over the line. Confronted with an image of a mortally wounded child she asks the obvious. When does a journalist pause to assist the wounded? She frames it as a nature show she watched where the crew kept filming rather than uniting the afflicted baby elephant with her mother.

That’s a tough question for which there is no ready answer. In the wild the rule for documentaries is not to interfere in the process of life and death. But are there different rules when journalists are reporting on and filming human carnage?

The defense is that by reporting and publishing horrific images they are helping victims by getting their story out. Richard suggests that he will edit and produce a coffee table book with her images and Jamie's text.

Through sound and lighting there are transitions in her recovery. They make a rare visit to the theatre to see a drama that is described as having an uncanny resemblance to the play we are seeing. James hated it and theatre in general. That got some cheap laughs. Then with either clever prescience, or a death wish, Margulies uses Jamie to vilify liberal audiences. In an art imitates life screed he describes patrons as bitch slapped from the stage then rising for a standing ovation. Audiences pay to be punished. And of, course, that’s exactly what happened at the conclusion of the play.

I for one felt totally manipulated by the playwright and agreed with Jamie’s speech. The theatrical devices of reversal and deflection seem to be a “can’t help himself” tendency of Margulies.

Relating a bad dream Sarah tells Jamie of misgiving about shooting carnage even when a mother asked her to stop. In shattering hindsight Sarah recalls the victim’s blood smeared on her camera lens. It felt like betrayal for Margulies to verify and make credible the naive accusation of Mandy. He provides substance and credibity to a character he has written to deserve none. The moral imperatives of Sarah and Mandy just don't mix and match.

There is yet another awkward deflection. The clueless Mandy tells Sarah that she is not Richard’s midlife crisis. Of course it is perfectly obvious that she is. By the end of the play, for shame Mr. Marguiles, Mandy has become endearing as a mother. Overstating the obvious it is something that Sarah will never know. While Sarah craves to get back in action, there is an absurd comparison to Mandy who is willing to give up event planning to be a stay at home mom.

There are other twists and turns but that's all he wrote.