A Different Kind of Self Portrait 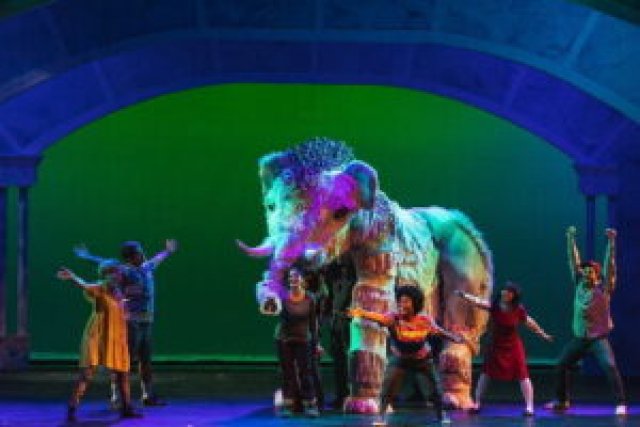 Photo by Morgan Sophia Photography Jess the mastodon co-exists with her human counterparts in The Impracticality of Modern-Day Mastodons. 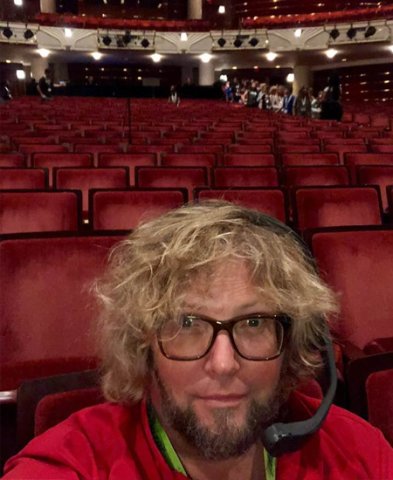 After all, the work of art stands about nine-and-a-half-feet tall. And it measures roughly 12-feet long (about 15-feet long with her trunk extended).

Still, Hammond sees himself in Jess the mastodon, a puppet that he designed for Theatre Lab’s current production of Rachel Teagle’s play, The Impracticality of Modern-Day Mastodons.

A mastodon is a pre-historic, elephant-like creature.

“Jess, to me, is kind of a female version of myself,” said Hammond, a puppeteer with more than 30 years of professional experience.

For instance, Jess has a “cuteness and awkwardness” about her. And Hammond admitted he sometimes feels cute, yet awkward.

Also, if you look into Jess’s eyes, you will notice nerf balls – the type of ball with which Hammond played catch as a youngster.

Hammond estimated that roughly 10 months elapsed from the time when he and the production’s creative team held their initial conversation to the puppet’s completion.

“I’m in love with her,” Hammond said. “I love what (director) Matt (Stabile) and the puppeteers have done to breathe life into her.”

Folks have until Sunday to watch as Jess lumbers across the stage in The Impracticality of Modern-Day Mastodons. Remaining showtimes are at 2 p.m. and 7 p.m. Saturday, as well as 3 p.m. on Sunday.

In the play, the world reaches a moment when everybody’s biggest dreams have suddenly come to pass. For example, those wishing to become princesses have lived to see their wish come true. Ditto for astronaut enthusiasts.

As a young girl, Jess harbored a slightly different wish; she wanted to become a mastodon, and we learn why in Teagle’s play. To read a review of Theatre Lab’s production, go to http://www.berkshirefinearts.com/09-06-2021_the-impracticality-of-modern-day-mastadons.htm. Theatre Lab is the professional resident company at Florida Atlantic University in Boca Raton.

While Jess and others’ dreams come true, they must ponder the answer to at least one question – what happens now? For instance, Jess must find a place for herself as a modern-day mastodon in an urban setting.

By contrast, for more than 30 years, Hammond has been well-settled into his place in the working world. Actually, Hammond began playing with puppets at about age 9, in his native state of New York. At the time, he would put on puppet shows in his backyard. He recalled that his neighbor’s children had “beautifully-crafted puppets,” and they would loan it to him so he could perform with them.

While Hammond said he was a clumsy child, his involvement with puppetry and live theater helped to alleviate that clumsiness. Also, Hammond recalled that as a youngster, he experienced panic attacks around others, and was “very, very nervous.” However, working with puppets and in live theater enabled him to communicate his thoughts and feelings.

At age 17, Hammond started working at an amusement park in the Adirondacks in Upstate New York. Among other people, he worked with magician David Copperfield’s illusion designer. Later, he served as a puppet master for the national tour of Broadway’s The Lion King. Hammond was one of three puppet masters who kept The Lion King’s menagerie of more than 200 puppets “alive and well.”  If something broke on one of the puppets, he was there to fix it.

But, Hammond’s “most renowned project to date,” according to the production’s program, is serving as the founding artist, lead puppeteer, and executive producer of the Florida Day of the Dead celebration (http://www.dayofthedeadflorida.com).

The highly-praised event attracted almost 30,000 participants for its 10th anniversary in 2019. For the celebration, he once created a puppet that stood more than 20 feet tall.

Even so, “my wife sees Jess the mastodon as the pinnacle of my creative career,” Hammond said. More than 18 people helped bring Jess to life. By comparison, on average, Hammond said about five or six people work with him on a project.

“Jess was pretty complicated,” he said. “Every piece of her was hand-stitched.”

Hammond said about a week before rehearsals, he worked with the puppeteers to get them comfortable with Jess and to help them move and breathe as a single entity. A total of 11 puppeteers are available to bring Jess to life on stage.

However, four puppeteers, including Gaby Tortoledo, who portrays Jess, work a given performances. The others are on standby.

Tortoledo said it was great to work with Hammond.

“There aren’t enough words to summarize my admiration for Jim and his creation,” she said. “He was there with us workshopping the first week, sharing with us the details of his vision when building her, and teaching us how to best coexist with his creation on stage.”

“It was an absolute pleasure to work with him and we are thrilled to have had him on the team to bring this larger-than-life show to the stage!,” he said. “Jim is an amazing artist who fully understands the power of collaboration.

“Also, I have to give a shout-out to the puppeteers, who have been simply amazing. While some of them have some prior experience, they are all new to this scale of puppetry and did incredible work in learning what she could do and how in a period of about three weeks.

“It’s has been unreal to watch Jess come to life over the course of the rehearsal process and so very satisfying to see her now, in performance, bringing all that energy to the story!”

“I guess what impressed me the most is the level of detail that went into building her,” the performer said. “No matter how close I look I always seem to find something new I had missed the days before. Whether it’s a patch of fur, a string of nylon, or a metal plate on the inside, there’s always a new layer to discover.”

Hammond said that one of the most important things for a creative person to do is to discover their own authentic voice and put themselves into their artwork.

“I feel like with Jess, I truly did that,” he said. Stabile “gave me the freedom to truly create a self-portrait.”

Theatre Lab’s world premiere production of Rachel Teagle’s comic-fantasy The Impracticality of Modern Day Mastodons runs through Sept. 19 at the Florida Atlantic University Boca Raton Campus’ University Theatre, 777 Glades Road, Boca Raton. For specific directions, go to https://www.fau.edu/artsandletters/university-theatre. Tickets cost $25 for adults (up to four children free with an adult ticket). Showtimes are 2 p.m. and 7 p.m. on Saturdays, as well as 3 p.m. on Sundays. To watch a trailer, go to https://www.youtube.com/watch?v=Vpd2WYEb2Yk. And to buy tickets, go to https://fauevents.universitytickets.com/w/event.aspx?SeriesID=338. Theatre Lab’s phone number is (561) 297-6124. To watch a trailer, go to https://www.youtube.com/watch?v=Vpd2WYEb2Yk.