Going with the Flow of an American Odyssey 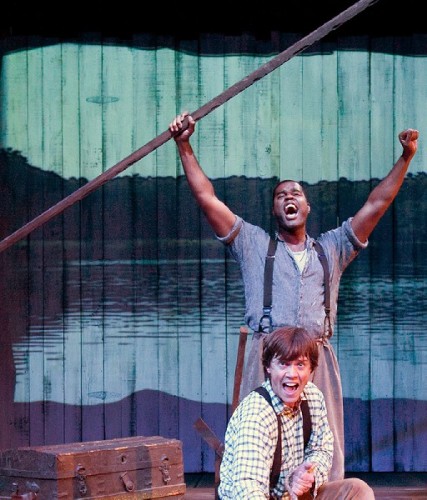 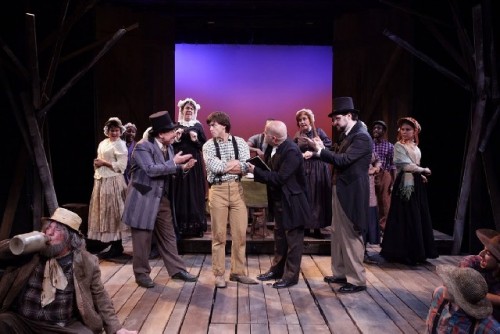 The congregation wants to save Huck from the devil. 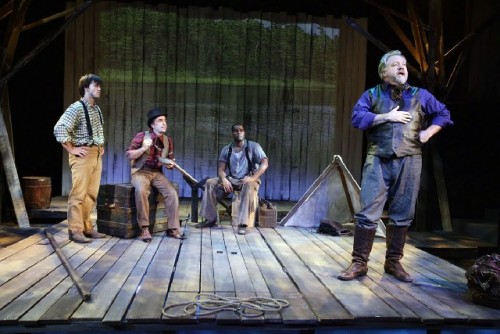 The scoundrels board the raft. 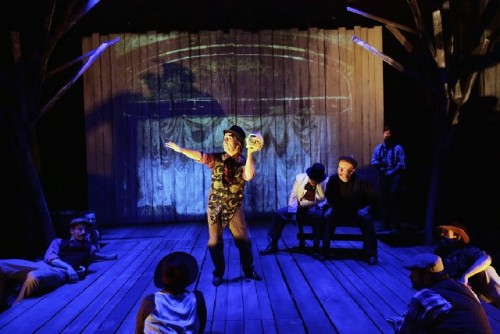 When to be is not to be. 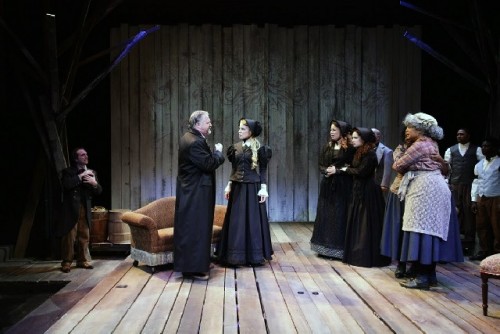 Defrauding the girls of their inheritance. 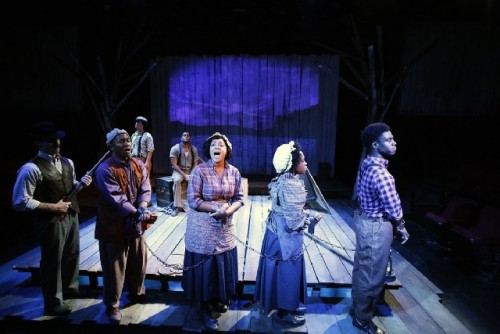 The Lyric Stage Company of Boston opens its season, September 2 through October 8, with a lively and ambitious production of the musical Big River; The Adventures of Huckleberry Finn, based on the novel by Mark Twain with music and lyrics by Roger Miller and book by William Hauptman.

The Lyric production with a cast of twenty and an eight piece orchestra, under the music direction of Jonathan Goldberg, has been directed by Spiro Veloudos. It comes with an impressive pedigree and distinguished awards. The brilliant set by Janie E. Howland and projections by Seághan McKay will have you rolling, rolling, down the river.

The first productions were staged by the American Repertory Theater in Cambridge in February, 1984 and at the La Jolla Playhouse in San Diego, California, from June through July, 1984. The Broadway production, directed by Des McAnuff and choreographed by Janet Watson, opened on April 25, 1985 at the Eugene O'Neill Theatre, and closed on September 20, 1987, running for 1,005 performances.

With the limited resources of a mid-sized theatre company this production overreaches its limits and boundaries. The adventures encountered by Huckleberry Finn (Jordan Ahnquist) and his runaway slave companion Jim (De’Lon Grant) are as broad and deep as the great river that dissects America both geographically as well as spiritually and sociologically.

The more so in the time frame of Twain’s novel. Shortly after publishing The Adventures of Tom Sawyer he started the sequel The Adventures of Huckleberry Finn in 1876. Widely praised as The Great American Nove, and progenitor of American Literature, it was completed and published in 1883. It was read by generations of school children until offense was taken of its use of the term “nigger.” There has been a national debate focused on the removal of the classic novel from school curriculums and even the shelves of libraries in conservative communities.

The ‘n-word’ occurs 219 times in Twain’s novel. Alan Gribben of Auburn University, edited the book for Alabama-based publisher New South. Gribben, a Twain scholar who has taught the book for decades, says that he himself struggled with uttering the n-word aloud in the classroom. The edited version changes ‘nigger” to “slave” and another offensive racial term ‘injun’ to ‘Indian.’

We heard Twain’s offensive language on stage in the Lyric production but well short of the 219 times it occurred in the original text. It is interesting that this has attracted little or no media attention while across town, simultaneously, the elimination of ‘the n-word’ from the ART production of Porgy and Bess has been the focus of a critical maelstrom.

With so much attention on the use of an offensive word it is easy to loose sight of these masterpieces and their rightful positions in a dialogue about art and history in our society. The Adventures of  Huckleberry Finn, in 1887, and Porgy and Bess (the 1937 Gershwins’ opera based on DuBose Heyward's novel Porgy and subsequent play (1927) of the same title, which he co-wrote with his wife Dorothy Heyward) reflect their time and culture and as such deserve to Requiesat in Pace.

It is noteworthy that the writer Twain (1835-1910) and artist, Winslow Homer (1836-1910) were of the same generation. Before them John Greenleaf Whittier (1807 – 1892) wrote the poem “The Barefoot Boy” in 1855. Homer was a war correspondent and illustrator for Harper’s Magazine. For both of these creators the paradigm of the barefoot, innocent boy became signifiers for the heart and soul of America in an allegory of rebirth during the aftermath of the Civil War (1861-1865). In their writing and images of voyage, adventure, play and discovery they represent the tender and fragile rebirth of a national conscience shattered by war and the indelible scar of racism and slavery on the national psyche.

While progress has been made it is a legacy of shame from which we have never  recovered. Add to slavery the genocide of native people, horrors inflicted on Chinese laborers, the struggles of immigrant Irish, Italians, and Jews as well as the internment of Japanese Americans during WWII.

Huck, who embraces the runaway slave, Jim, is an emblem for a hopeful and better America. Jim refers to him as the only white person who ever kept a promise. It is significant that this unique bond occurs between Jim an adult male, a slave with horrific life experience, and Huck, a boy, who, like his pal Tom Sawyer, seeks adventure and wisdom through an Odyssey.

While Huckleberry Finn may be regarded as the fulcrum of the American novel it was written millennia before Gilgamesh and The Odyssey, Chaucer’s The Canterbury Tales, those other 19th century epics, Melville’s Moby Dick (1851), Walt Whitman’s (1819–1892) Leaves of Grass, with its Song of the Open Road. and generations before Kerouac’s On the Road (1957). The operative notion is that travel broadens. It is how boys become men, and men heroes, by enduring the challenges of the road, sea, or river.

It is the means by which Huck and Jim, on a simple raft, are able to navigate through a broad swath of America during a time of strife and regional difference. The terms North and South identified more than points on a compass.

All of which may represent far more depth and gravitas than possible for a popular musical or the limited resources of Lyric Stage. Despite its many awards Big River a thin soup serving of ersatz Americana by Miller (1936-1992), an engaging but forgettable composer. The country singer and composer won 11 Grammy Awards and is best remembered for “King of the Road.”

Arguably, his vernacular style and country roots were well suited to the time period and theme of Huck Finn. There are indeed a number of catchy tunes “Do Ya Wanna Go to Heaven” “Muddy Water” “River in the Sun” “Worlds Apart” “Arkansas” and “Free at Last” but too many that are not.

As the river twists and turns for some two and a half hours it gets tough to cling to the raft. What keeps us on board is the boundless energy and enthusiasm of Ahnquist’s Huck. His youthful charisma is matched and even topped by the inventive and conniving Tom Sawyer played totally over the top by a not to be denied Phil Tayler. Tom’s mantra seems to be why do it the easy way when the hard way is more interesting and challenging.

Compared to the manic even reckless performances of Ahnquist and Tayler the Jim of Grant is far too stoic and remote. While Grant has the strongest and most confident voice on stage he brings little depth to his character. We never really feel or believe in the bond that connects a slave to the boy Huck. Their connection in this case, significantly, is less than skin deep.

By the end of the first act we were suffering a bit of river fever. That got cured in a hurry when the scallywags and con artists The King (J.T. Turner) and The Duke (Peter S. Carey) hop aboard. Their gonzo shenanigans perk up the action big time. They also set the moral dilemma of the play by scheming to defraud three women of their inheritance. They attempt to sell the family slaves as well as Jim.

With twenty players on stage, often the full cast in ensemble pieces, the range of ability was uneven. The few adequate singers were often out of harmony with less capable members of the cast. But those pentimenti were smoothed over by a collective charisma and panache in which the whole was more than the sum of its parts. For most members of the audience Big River adds up to a perfectly delightful and entertaining evening of musical theatre. It is readily evident why this musical ran for 1,005 performances on Broadway.

The callous, greedy mistreatment of the slaves unleashes the moral compass of the musical and some of its most poignant and poetic insights. The emotionally moving anthem “Free at Last” sung by Jim and the Slaves draws liberally from the text of Martin Luther King’s “I Have a Dream” 17-minute speech delivered on August 28, 1963. It struck me as odd to hear Dr. King’s words and images coming from Jim a full century before they were uttered. Miller took liberties with history, Twain, and King to reconfigure them in this manner.

This was less an homage to the 1960s Civil Rights movement than a knee jerk attempt to connect with the audience. It is an egregious example of what Dwight MacDonald identified as "Masscult and Midcult" in 1960. Or what Clement Greenberg wrote about in 1939 in his seminal essay “Avant-garde and Kitsch.”

It underscores the uneasy feeling of experiencing Big River as mass culture striving to the status of high art. The template for this revisionist populism is to glom onto Twain’s American masterpiece however misunderstood.

My goodness how Huck Finn has been abused. First as set to the music and lyrics of a mediocre composer, Miller, and then overhauled and rendered politically correct by Gribben.

What’s next, Gilgamesh the Musical?