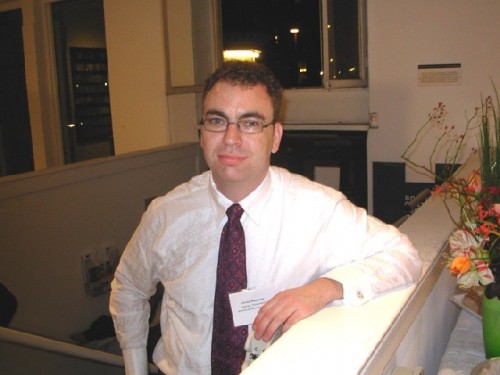 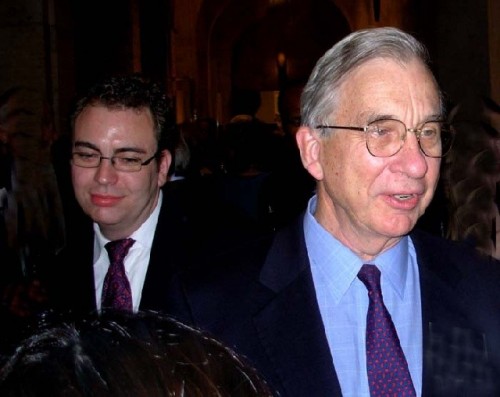 Since last summer, James Manning has been working with Tom and Scott Cipolla to curate exhibitions for Space 200 a small but elegant gallery in the lobby of a high rise office building just steps from historic Quincy Market. Over beer and burgers this week, Manning who was my former student at New England School of Art & Design, was just finishing the installation of the latest exhibition, Monochrome, which opens this week. He was both excited as well as melancholy. The recent sale of the building implies that the gallery will not likely continue its rent free status.

Just when things were going well, with several strong and well received shows, once again Manning, one of the best and brightest independent curators in Boston, faces the prospect of being homeless. Gallerywise. With ten years as an independent curator he has some 80 shows on his resume but no secure gig. He disclosed that he has been paying out of his pocket a share in running the gallery which, will enjoying a donated spaces, has not generated sales. Once again, curating exhibitions has proved to be a labor of love.

Not that he was crying in his beer. With the closing of this alternative space all but imminent he wonders when his next consistent chance to curate will occur. There is the concern of falling off the radar screen. Having gone through this scenario one too many times, he discussed options and ambitious plans, as well as a litany that tends to plague young and ambitious curators.
Actually, Jim is pretty much a regular beer and burgers drinking buddy. Neither one of us has a sharp memory of when we first met as student and teacher. Those were morning classes, years ago, and we both had bad habits. He thinks that I gave him a C minus and doesn’t remember learning very much. But we have talked about art non stop ever since. Like many in this city, I have come to rely on his sharp eye for emerging talent. He is always in the thick of it and a ready source for information on the turmoil of the alternative art world.

Over beers I have long been a friend, mentor and nag. He started school in 1993 and finally completed a BFA in 2004. Jim got fed up with me harassing him about that. It’s been tough as he paid his own way and was cautious about acquiring debt. So we have hung out for years but the difference is that this time I took notes.

We started with some vital stats. Born in Boston, 11/ 22/ 74. Asked how he became involved with art, not an interest of his divorced parents who have taken little notice of his many exhibitions, Jim described being virtually the entire tech department of the drama program at Westwood High school. As a kid he liked to take things apart and put them back together to see how they work. Today, his range of skills, from construction and contracting through computer technology, is formidable and he is regarded as one of the best exhibition installers in the city.

Because of his skills in set design and construction it was recommended that he enroll in the Interior Design program at New England School of Art & Design. “That lasted about half a semester,” he recalled, “And I quickly switched to major in fine arts. Linda Brown, Audrey Goldstein and Harry Bartnick were important teachers and mentors for me, as well Addison Parks who at that time ran the gallery. Interning for him I got to work as an installer. He took the class out to see exhibitions. At first I was the bartender for openings but eventually he let me curate some student shows. The gallery program was very active and Addison was putting up new shows every two weeks.”

By 1996, he was involved with the group that founded the Fort Point Arts Community Gallery (FPAC) at 300 Summer Street in an artist loft building. He started as an intern and became a part of the planning committee. “I did my first big show for them ‘Under 25.’ It included about 40 artists,” he said. In order to find artists for the project he began to scour through the studios of the many art school in the city. For a couple of intensive months he made frequent visits and put up fliers. There were 80 applicants and although he used only half of them it became a data base for future projects.

He moved to Maverick Square in East Boston in 1997 occupying a large basement space. There he started his first gallery “Art Vigor” with a mandate to show his peers as well as students and a selection of established artists including former teachers. In hindsight, it was one of the early alternative spaces in the city. The openings, which included performances, music, and special events, were well attended and often lasted well into the night.

Then disaster struck. The basement was flooded. “Fortunately, I was between shows,” he recalled. “So no work was damaged. I had no insurance or I could still be paying off those bills. I completely rebuilt the space but the landlord reneged on crediting my materials and labor. I did a couple of shows after renovation but I ended up relocating.”

Just as he was phasing out of “Art Vigor” he started to work for “First Expressions” a non profit enjoying a donated space on Arlington Street that had a mandate to show the work of art students. When they lost that space but regrouped as Gallery FX and moved to Thayer Street. There were staff changes and Manning took over as director from 1999-2001. Eventually the prior poor management and lack of funding proved to be overwhelming. But Jim gave it a good run. He made important changes such as finding jurors for the exhibitions. Over two and a half years he installed 30 shows and hosted numerous events. For this he drew a salary of $1,000 a month but ended up working for free during the last six months.

Although the gallery had insurmountable problems his position put him in the loop with a small but growing scene of other alternative spaces. He became particularly involved with Oni and helped them to build out three different spaces, the last in Chinatown. That space was shut down by city inspectors some time back and the group put enormous time and energy into pursuing upgrades from a reluctant landlord and working to comply with building regulations. They seemed on the verge of reopening recently but that was squashed by arcane regulations of the fire department. In its time Oni was one of the most dynamic alternative programs in the city combining artist studios, galleries, performance spaces and just a place to hang out and talk. There was always something going on as Manning recalls.

To pay the bills, and finish school, Jim worked as a private contractor and installer. For the past few years he has installed the exhibitions for the program I run at New England School of Art & Design at Suffolk University. He has curated the summer shows of new talent including the lively, politically themed “Show Me Some Truth” which coincided with the Democratic National Convention in 2004. This summer he will work with Matt Nash and the staff of Big Red and Shiny in a redo of the successful money themed exhibition which they installed for one night only during a benefit at the Boston Center for the Arts. That terrific show deserved another viewing so they are reconfiguring the theme. Jim is working with curator Laura Donaldson of the BCA to organize an exhibition there in the fall. He also installs for the Judy Rotenberg Gallery and Kidder Smith Gallery as well as projects with Art Advisory of Boston. All of which keep him pretty busy.

But this beer and burger meeting proved to be a time to reflect. Once again he is faced with an alternative space on the brink of extinction. While the future is unclear he states with some conviction that, “My curating has gotten better. I am proud and excited about the upcoming Monochrome show and the abstract show that I did for Space 200 this season. For these projects I have had access to better artists. And I would say that my skills as an installer are top notch. The shows have looked great and gotten solid attention. Years ago people laughed at me when I said that I wanted to be an artist. They were skeptical when I wanted to be a curator or installer. Now I have done it all. I have 80 shows to my credit. No, I am not making the big bucks. But so what. I am doing what I want to do. Sure I struggle with money but I am doing good shows with great artists. I remain actively involved. How many artists make a living on their work? Very few. But we still do it.”

As an activist and one involved with students and emerging artists I asked him to evaluate the scene today. “We are at a point where we have to communicate more,” he said. “There is a lot happening but it is not getting noticed. Media coverage tends to ignore the alternative spaces. There is more of a crossover between commercial and non profit spaces. The lines are blurring between non profits like Green Street, Studio Soto, Zeitgeist, The Mills Gallery, The Artist’s Foundation, Art Interactive, artist run spaces including Bromfield, Kingston, Boston Sculptors, and commercial galleries like Allston Skirt, Samson Projects and Nao Projects. We need to go further in that direction but it is starting to happen.”

For some time Manning attempted to form an alliance of the alternative spaces to address mutual goals. Significantly about half of those programs no longer exist. But he points with enthusiasm to the emergence of the web site and projects of Big Red and Shiny in the past year. “That is the most exciting thing to emerge since Oni,” he said. “It has developed into a voice for all of us. A place where we can talk and discuss and have a dialogue. When I wrote a piece for them some time back about the art fair in Miami I got a lot of response and still do from perfect strangers. But I wonder why the city can’t develop and sustain major alternative spaces like Exit Art and PS1 in New York. Oni was more than a space. It was a community. That’s why I started the Art Initiative as an attempt to bring together the alternative spaces and programs.”

As we lingered over the last of our beers there was a sense of pride in accomplishments but frustration. Just where do we go from here? What are the moves for young and ambitious curators like Manning with a decade of experience under their belt but an uncertain future? I suggested that he spend more time in New York. Certainly there are greater opportunities. But also a rich and vibrant culture right here. If only.