A Studio Visit From Right to Left 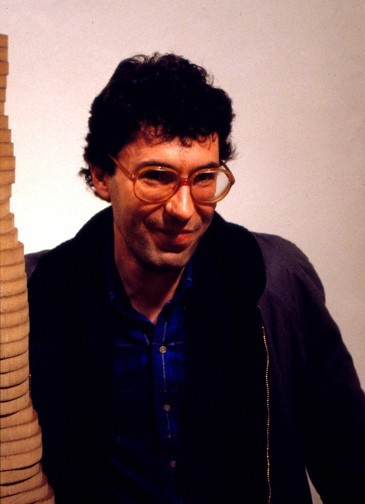 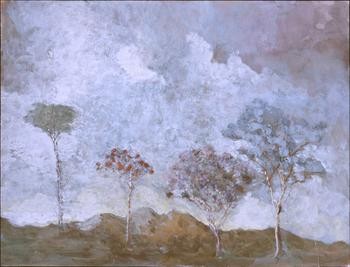 A landscape by Robert Ferrandini. 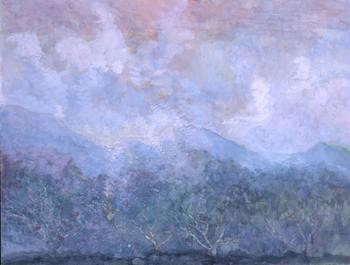 The artist is represented by Gallery Naga. 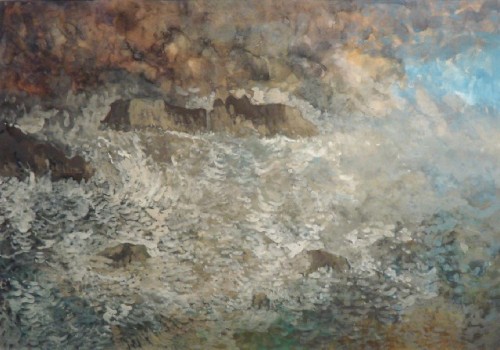 In October, Gallery NAGA, on Boston’s Newbury Street, will present an exhibition of new work by Robert Ferrandini. Since his stroke in October, 2001 the gallery has shown and sold paintings and drawings from its inventory, but this is the first body of new work, watercolor on paper, since undergoing a long and daunting rehab. As a naturally right handed person, he is now developing facility with the left side of his body as the right arm and leg remain paralyzed. The stroke ended some 35 years as a rock and blues guitarist.

At the time of the illness I was about to mount a group show of Boston’s four best painters; Ferrandini, as well as Miroslav Antic, Gerry Bergstein and Domingo Barreres. Visiting him at Mass General I asked if he still wished to be included in the project. He could not speak but nodded assent. I had hoped that he might get to see the show, and boost his spirits, but that never happened. Over the years, I have included him in various group shows and during an early phase of Maverick Arts, as a house gallery, I organized a show that focused on his early work in East Boston where he grew up in the projects.

“Have you seen the projects lately,” I asked as we sat in the living room of his Winthrop condo. They are now gone replaced by fancy new waterfront housing with upscale views of Boston Harbor. When we did the Maverick show Bob shared a lot of memories about childhood in tough and ethnic Eastie. Those early works frequently depicted the Boston skyline and views of the grim barracks like projects under attack by aliens in UFO’s. There were Godzilla like creatures climbing sky scrapers. His imagination was stimulated by Saturday morning kiddie shows and science fiction movies in the now long gone neighborhood theater. We arranged a talk at the local library and Bob shared those memories with an enthusiastic audience. His childhood imagination also consumed comic books and fantasy fiction.

It was the monthly studio visit by Gallery Naga director, Arthur Dion, and associate director, Meg Wilson. They were picking up the latest body of work and selecting what would shortly be sent to the framer for a half gallery show of some 10 to 12 pieces. In addition to the works on view there will be a portfolio of some 50 images created in the past year. They were excited that the latest group included a drawing that is somewhat larger in scale and a new large sheet was in progress on the easel. While the oil paintings that predate the stroke sold for as much as $18,000 the gallery intends to offer this new work from $1,200 to $2,000 for the largest pieces. Until now, Ferrandini has not shown watercolors so he is being reintroduced to the market and Dion commented that he hoped to generate “Lots of sales.”

Although the scale and medium differ there is a remarkable consistency in the imagery and feeling of the work that continues his exploration of the sublime and mystical landscape. Now charged with a renewed passion and intensity. In the spirit of New England transcendentalism, for Ferrandini, the landscape has long been a surrogate and signifier of the grapple with divinity. We have often discussed his interest in the British artist Turner and the 19th American painters Inness and Blakelock, and the writings on the Sublime by the British philosopher, Edmund Burke. While rooted in the past he reflects contemporary issues of the human condition. Bob was frustrated when asked about this. Of course he had read Burke but could not formulate an adequate response. He commented that he has difficulty reading now. And that communicating complex ideas is challenging. The information is there but difficult to access and articulate. To illustrate his condition he exclaimed that he would like to will his right hand to work but “I just can’t.”

I asked how he handled the issue of depression? He raised his eyes expressively but responded that it isn’t depression so much as frustration. Not being able to do things. That entails a reclusive life at home with few visitors. Once a week a friend helps with shopping and laundry. Days are spent on a couch where he paints by laying the work on his lap. He would like to return to oil paint but that entails physical demands. Interestingly, much of his prior technique has become transferred by a non traditional approach to watercolor. He tends to build up opaque surfaces, almost like glazing, that is seemingly anathema to the basic demand for transparency. The watercolor has the surface and texture of gouache and initially I asked if he used pastel, because of the dry almost dusty surfaces. Dion feels that a return to oil paint and glazing will perhaps occur when Bob, some time from now, exhausts the possibilities of watercolor. “If I could use oil I would, but I can’t,” Ferrandini said.

Dion notes new developments in the work in terms of color and palette as well as allowing for the visible brush stroke and markings which were previously not evident. There is more sense of process now compared to the prior striving for polished and refined surfaces.

This led to questions about loss and gain. That occur when life hands us obstacles and diminished physical skills, as has been the case for numerous artists in the past. Just how do we work within and accept the limitations. How does the work both absorb and celebrate the artist’s essential humanity? When and how does less become more? While he understood the nature of the inquiry Bob replied that he had no real answer other than the drive and passion to keep working.

From the beginning Dion and Wilson have been confident that Bob would again show new work. “For the first couple of years he experimented but didn’t want us to see anything,” Meg said. “About a year ago he called and said that he had something to show us.” In 2002, they organized a benefit for the DeCordova Museum that raised some $100,000. At the time Dion described it as a “Three year sabbatical for Bob to learn to use his left hand.” That projection, remarkably, appears to be right on schedule. Interestingly, much of that money remains invested as the gallery was able to make sales to meet the artist’s modest expenses. He doesn’t cook and relies on TV dinners in front of his cable TV, one of the few apparent “luxuries” in a rather Spartan environment.

Surviving as an artist/ musician has always been a struggle. He grew up poor, but didn’t think of it that way, as one of four children raised by a single mother. He had an uncle with talent but that was discouraged by the family. Bob ended up in the arts by default because “I failed at everything else. I started making art at the age of 6.” After attending Boston English and East Boston High he went on to Mass College of Art where he eventually earned an M.F.A. degree. While he never taught art he appreciated the graduate study and how it impacted the development of his work. In 1964, he was inspired by the Beatles and Stones to make music. Eventually he explored the blues. In 1990, Bob and his band played for my raucous 50th Birthday celebration a dance party at the spacious former Equus gallery.

“I failed at everything I did other than art and music,” he recalled of his developing years. “That worried me and a lot of people including my ex wife. I was determined to prove them wrong. I eventually did that. But I realize it doesn’t matter. Some people live life nice but I can’t. I had a rough childhood. Yes I did go to movies and read books but what I did wasn’t liked. My family asked what I would do in life?”

Even before the stroke there was a remarkable intensity, ambition and austerity to his lifestyle and approach to the arts. As a rock and roller he never indulged in its excesses. He never smoked, or consumed drugs and alcohol. It was always just about the work and music. Which he would discuss with remarkable intensity. That is still very much in his eyes and expressive facial gestures even though now the words are measured and halting.

I asked how he feels about this new show, going public again after a rough five year hiatus. He shrugged it off. After ten or so shows at Naga for him it is just another show. I asked if he is concerned about how the audience will view him? As an artist, or an artist with a disability?

“I don’t care about the presentation,” he replied. “The viewer has the right to see me however they wish. I can’t control that. But it is about the work. Doing the work. Just continuing to work every day. It’s the work. That’s it. The work.”