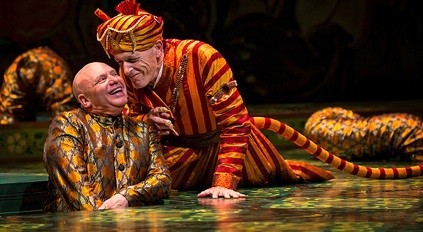 Due to popular demand, the Huntington Theatre Company again extends the run of its world premiere adaptation of The Jungle Book – the final performance will now be Sunday, October 20. The “inventive and visually stunning” (Entertainment Weekly) production officially opens tonight, Wednesday, September 18 at 7pm at the Huntington’s mainstage, the Boston University Theatre.

Tickets to all performances are now available online at huntingtontheatre.org. Beginning at noon, tickets will be available by phone at 617 266 0800 and in person at the BU Theatre (Avenue of the Arts / 264 Huntington Avenue) and the Calderwood Pavilion at the BCA (South End / 527 Tremont Street) box offices.

Group tickets at up to 20% off are available at 617 273 1525. The most affordable way to see The Jungle Book is with a subscription. Seven-play packages including The Jungle Book are the best value and start at $126. More information is available by phone at 617 266 0800 and online at huntingtontheatre.org/subscribe.

Tickets to The Jungle Book start at $25, with prices ranging to $135 (subject to change). Selected discounts are available. Check huntingtontheatre.org/junglebook for performances with the best availability.

The Jungle Book is produced by special arrangement with Disney Theatrical Productions, which proudly supports Zimmerman's development of this title, providing financial support, creative consultation and access to song material, and in association with Chicago’s Goodman Theatre.