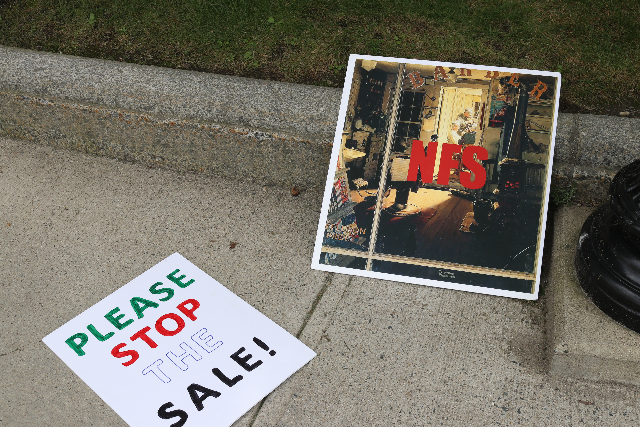 The pending sale of 40 works of art by the Berkshire Museum, in auctions by Sotheby’s, are scheduled to proceed in stages starting in November.

Through numerous articles, letters to the editor and op-ed pieces locally, nationally and internationally we know more now than when the Berkshire Eagle initially posted a cheer leading editorial touting the “reboot” to save the museum.

Plans entailing some $60 million derived from cherry picking the fine arts collection are to be applied as a projected $40 million for endowment and another $20 million for renovation.  Emerging architects have been hired to create a glass enclosed lobby and atrium.

Few if any art world professionals are impressed by their models presented by the museum.

Their design entails destroying aspects of the structure including ripping out the art deco Crane Room. It is as much a beloved Berkshire treasure as the two Norman Rockwell paintings, key Hudson River works, two early Calder sculptures and other objects that have signified the museum for generations.

Many ask if the museum, its director Van Shields and board, are intent on saving or destroying the 114-year-old museum?

Four pages of the news section of the Sunday, September 10 issue of the Berkshire Eagle were devoted to an  investigative report on the conflicted tenure of museum director, Van Shields, during a prior position in South Carolina.

Ironically, the piece focused on his similar aspiration to create a unique museum there, also with a $60 million projection. The bottom line for that failed attempt curiously matches the current funding goals.

The Eagle reported that in pursuing the South Carolina project Shields burned through $10 million and left a debt of $800,000. The report acknowledges individuals who thought well of Shields and supported his vision. That is the case here as well.

The Berkshire Museum board is vague when asked, in light of the Eagle’s dredging the harbor of past performance, if it adequately vetted the candidate? Within roughly a month he was fired there and hired in Pittsfield.

During the interview process he told the search committee that he had been forced out by political pressure from individuals connected to the Tea Party. Apparently, that worked in his favor as a reverse carpetbagger escaping the South. There was a second chance to reboot not just a museum but his damaged reputation in a liberal Northern setting.

Readers of the Eagle’s damning report on Shields have expressed concern and dismay. Within 24 hours, however, there was an official response from the museum in support of the director and his plans. When contacted by reporters board members declined to comment.

It has been noted that the board is comprised mostly of business and legal experts. Joan Hunter, former president of the Jacob’s Pillow board, and with her family a major supporter of MASS MoCA, is unique with extensive experience and insight regarding arts administration. She has commented prior to, but not since, the investigative reporting on the controversial background of the museum’s director.

The museum has made much of a two year study by a diverse group of 400 individuals. News of this process was made public only after the sale was announced. A letter about the legal basis for the sale was sent to the office of the Attorney General prior to a meeting and vote by the board of trustees.

It is clear that by moving to sell art to raise money for endowment and renovation is in violation of museum ethics for deaccessioning. The legal authority for the sale is under investgation. In an op ed piece in the Eagle Steve Nelson has laid out ways in which, regarding the two Rockwell paintings, the museum may be in violation with an implied trust. In good faith the artist gave the works to the community with the museum as their custodian. We will discuss this in depth with Nelson.

The norm for such instances of ethical violations is to be shunned by other museums. That has a direct impact on loans and participating in traveling exhibitions like this summer's guitar show. With a reconfigured mandate for science and interative displays the museum has gotten out of the art game. The upcoming retrospective for Berkhire artist Morgan Bulkeley may but its last such project.

While Shields may brush off pariah status in the art world there is the far more damaging impact of cutting ties with the Smithsonian. For the kind of displays, exhibitions and projects it envisions the Smithsonian is the mother lode for essential material. There is an alarming disconnect from the professionalism of scholars, curators and conservators required to preserve a vast and diverse collection of objects.

There has not been a curator on staff since 2015. No answers have emerged as to who went through the collection and made the selection of 40 works. It is likely, but not confirmed, that the auction house was foremost in determining what was to be sold. The estimates range from multiple millions for the Rockwells to lots for as little as $100,000.

Former staff members have reported through the Eagle that Shields viewed fine arts collections and discussed monetizing them not long after taking charge of the museum. He looked at beloved objects and saw dollar signs.

In going for the gold, a quick fix for his failed administration, there has been callous disregard for what these treasured objects, and the historic Crane room, mean to the Berkshire community.  Those who support willful desecration as the only possible option have shed crocodile tears over such an egregious and permanent  act of iconoclasm.

There have been numerous articles and reports on strategies for short and long term renewal of the museum. Critical analysis supports the position that Shields and the board have overstated the dire straits of the museum.

A number of individuals have looked at the tax returns filed through the Charity Desk of the office of the Attorney General. They are available to the general public by visiting the State House or on line.

There are available annual reports from 2011, the first year with Shields as director, through 2015. It is usual to have a lag of a year or more.

Thomas White, an individual with financial expertise, has looked at the reports and discussed them with me. I asked if he would send me observations. They are presented as the following bullet points with a disclaimer. They represent the opinions and analysis of the contributor based on public information.

Over the years, the museum has suffered from a dwindling endowment, lackluster programming and subsequently flat foot traffic, among other ailments.

Van Shields contends that the museum will close within a decade, and his efforts to date have not succeeded in reversing this course. This is a question of past leadership, not future vision…

Contrary to Shields public statements, the museum is not in a “death spiral.” Let’s look at the facts from available tax filings during his tenure:

The obvious solution is growing the endowment through philanthropy – among other changes. The fact the museum recently attracted a $2.5 million grant from a single source in support of the “new vision” is proof positive that philanthropy is alive and well in the Berkshires…

The “bottom line” is that the financial health of the museum is not stellar.  Would the museum be forced to close its doors in 5-10 years as a result? Only full disclosure- the museum has acted with secrecy- would answer that question for a concerned community.

While no one can predict the future, I (White) choose to believe that, given the proper leadership -  the museum's future is bright.