A Splendid Start to the Series 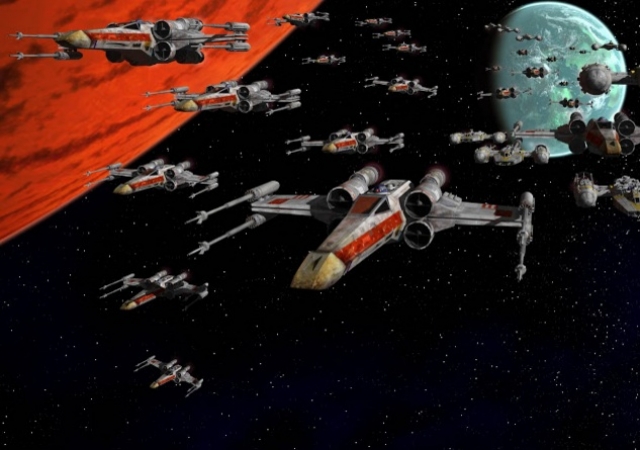 Star Wars at the New York Philharmonic
There would be no Star Wars without the music of  John Williams. On Friday night, the composer's stirring opening music sent hairs standing on end as the New York Philharmonic gave its second performance of the complete orchestral score of Star Wars Episode IV: A New Hope. Their task: accompanying George Lucas' 1997 remastered "Special Edition" of the beloved 1977 science fiction classic. This concert series will continue later this month with The Empire Strikes Back, Return of the Jedi and the most recent "official" episode in the series: The Force Awakens.

On the podium, conductor David Newman led a surprisingly small force for this grandiose music, the size of symphony orchestra that one would associate more with Brahms or Tchaikovsky than with the titanic forces of Darth Vader. However, the score for this first of the eight (and counting) Star Wars movies is more modest, lacking both the tub-thumping Imperial March and the eerie, wordless choruses associated with the cycle's chief villain, the Emperor.

In fact, Newman's leadership reminded one of just how much music is packed into this film score. The orchestra never stops for the first twenty-five minutes, hushing only when the film's two robotic characters R2-D2 and C3PO, are alone in the deserts of Tatooine with literally no living things in sight. When the Jawas appear, they are announced by the pompous honk of bassoons and slithering strings that sound like a Richard Strauss opera. More noble figures for horn and trombone greeted the arrival of the Siegfried-like Luke Skywalker and his mentor, the wise, wizened, wizardly old Jedi Knight Obi-Wan "Old Ben" Kenobi.

The only disappointment in the first half was the orchestra's choice to "take five" during the Cantina scene, and let the soundtrack play out the jazzy tunes by Figrin D'an and the Modal Nodes. While it would have been difficult to match volume with this dialogue-heavy sequence, it still would have been fun to hear this music played live. The audience compensated however, cheering when Chewbacca and Han Solo were introduced, and cringing audibly at the poor editing in the infamously re-edited sequence where it is made to look as if Greedo shot first.

As the Millennium Falcon launched into space with the unlikely heroes Luke Skywalker and Han Solo on board, the orchestra picked up. Indeed, the players seemed to relish the grandeur of these space opera scenes, contributing surges of strings and brass to carry the story forward and pounding percussion  as the heroes were "tractor beamed" into the maw of the Death Star. (This was the point where intermission was taken, presumably to let the players rest and recharge the lightsabers.)

The rescue of Princess Leia from her cell deep in the Death Star completes the "team" of protagonists and changes the character of the music. The horn and trombone based themes for Luke and Ben Kenobi are joined by the swelling, romantic Leia theme, which will evolve into the Tristan-esque love music in the next film. The chases on board the Death Star and thrilling escape were followed by a tour de force, the score's first dogfight between the Falcon and three enemy fighters.

The spectacular finale, in which a handful of tiny Rebel Alliance space-fighters go into battle against overwhelming odds is known to almost every filmgoer. With crisp projection and sound, this sequence, cobbled together from models, camera angles and vintage 1977 special effects looked fresh, modern and as brilliant as when this writer first saw it at the age of four. Star Wars thrilled me then and thanks to the taut playing of the New York Philharmonic, it still thrills today.

(Reprinted by permission from Superconductor).