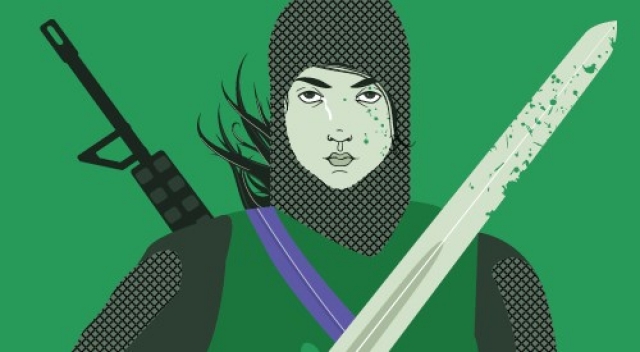 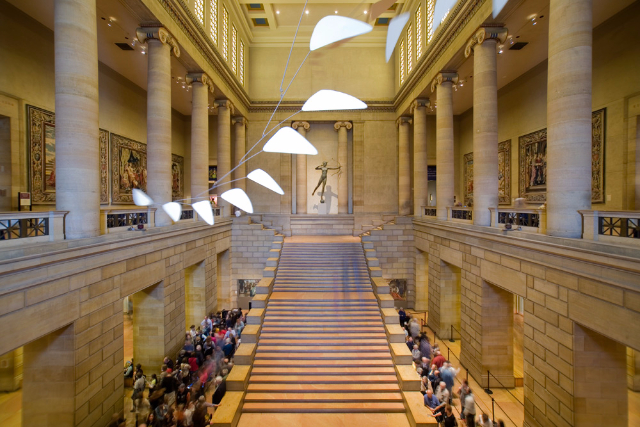 A Calder hangs above the steps in the Great Hall. Audience members looked down through its fractured effect. 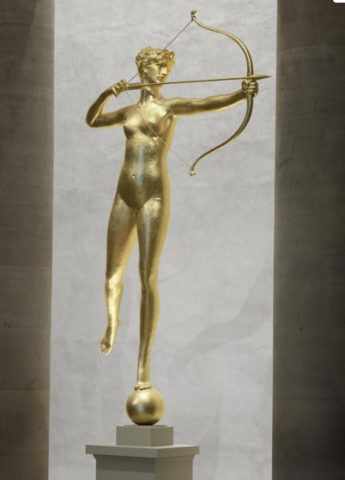 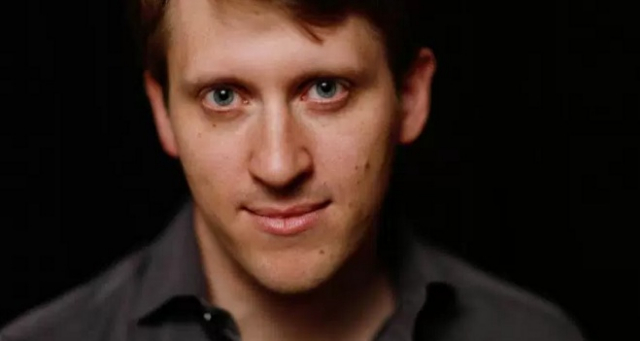 Lembit Beecher is a compelling composer with an absolutely unique musical sound. He uses what strikes him and it is clear he has special selection gifts. To give himself Monteverdi as an anchor and jumping off point apparently freed him to express in whatever way possible the dreadful effects of war on human couples.

Even if you know Monteverdi's Il combattimento di Tancredi e Clorinda, it startles in The Cloisters at the Philadelphia Museum of Art.

Beecher's collaboration with librettist Hannah Moscovitch in the contemporary portion of the stories yields a tale as dark as Bluebeard's. This is suggested in Bartokian tones and also  by Peter Sellars’ recent take on Handel’s Hercules. There soprano Lucy Crowe, sitting with an abu ghraib head covering, sings for all of us who have been traumatized by experience. Now Sorrel, a soldier who has returned from the front, is sung with wrenching beauty by Cecilia Hall.  She tests the same waters that Iole did in Hercules conveying fear, anxiety and a desperate desire to stop the nightmares.

The rising steps in the Great Hall of the Philadelphia Museum are topped by a tall Diana, huntress shimmering in gold.  These steps would have suited Eisenstein's baby carriage and are more dramatic than Rocky's choice of the Museum entrance. The shadows cast by characters on the steps form jagged chevrons as they rise, a perfect symbol of the emotional texture of this opera.

Tucked half way up the steps sits a small ensemble that also performed in a corner behind the Cloisters courtyard for the Monteverdi opera. Gary Thor Wedow conducts to reveal the score's dramatic purpose and intricate detail. Beecher's choice of a Baroque oboe, a theorbo from the lute family and other unusual plucks and tones add to the harrowing pleasure of the music.

Each scene of repeated nightmare is longer than the one before and we are hypnotized by Cecilia Hall and Craig Verm singing the roles of the couples in both the Monteverdi and the Beecher.  Beecher has picked up the purity of Monteverdi, and even with the harsh touches of Bartok, the sound is one that suggests clarity in the painful tales.

The wife in I Have No Stories to Tell You is named Sorrel after a plant with sharp, pointed leaves like Diana's arrow.  The plant has an acidic, sour taste and Hall's emerges as her dreams draw her closer and closer to her war experience. Certainly her husband is being driven crazy by them.

The reveal is Noah, sung with force and beauty by Samuel Levine, fresh from the demanding role of the narrator in the Monteverdi. The degree to which these roles grow out of Monteverdi and into the Beecher is subtle and yet deeply satisfying. Three Memories are memorably sung by Sarah Tucker, Rachel Calloway, and Abigail Levis, a soprano and two mezzos forming a fixed and appropriately disturbing chorus.

Robin Guarino has directed to maximize the museum locations.  Lighting by Mary Ellen Stebbins is often dark with the clever use of spotlights.

This has been a jarring week of opera, but a thrilling one. Sarah Williams, who is in charge of new works at the company, performed the Herculean task of getting these works to stage.  Beecher was housed by the company for three years as inaugural composer-in-residence and fell in love with the opera form during this residency.

Opera Philadelphia makes the case for its position at the forefront of new opera in this country.  It clearly represents the future.  We were offered diverse topics,  composers and librettists with intriguing productions night after night. Opera Philadelphia's Festival bodes well for the form.  Open-spiritedness makes the performance venues livable and walls less apt to close in.