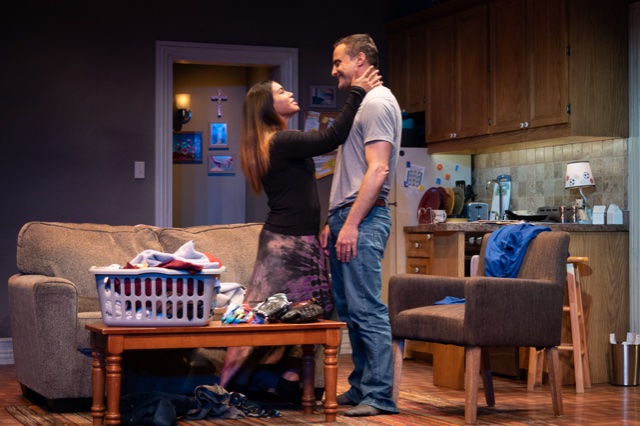 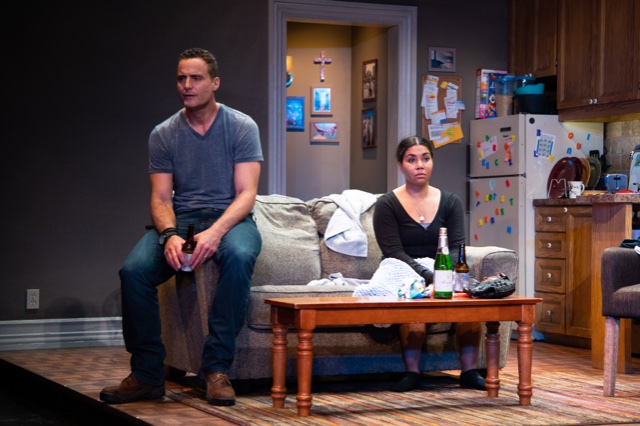 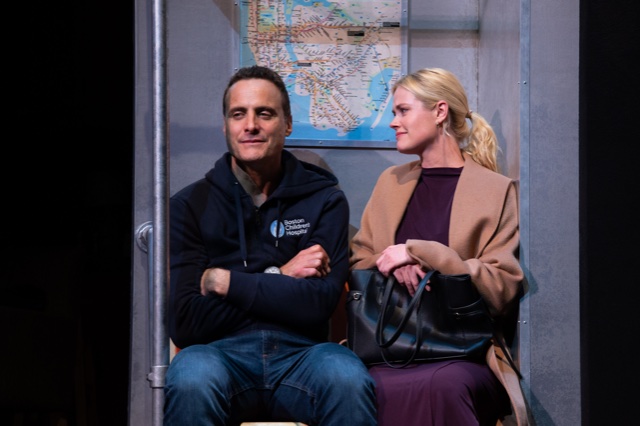 Dominic Fumosa and Abigail Hawk meet accidentally in a subway. Abigail is filled with hope in Jasper. 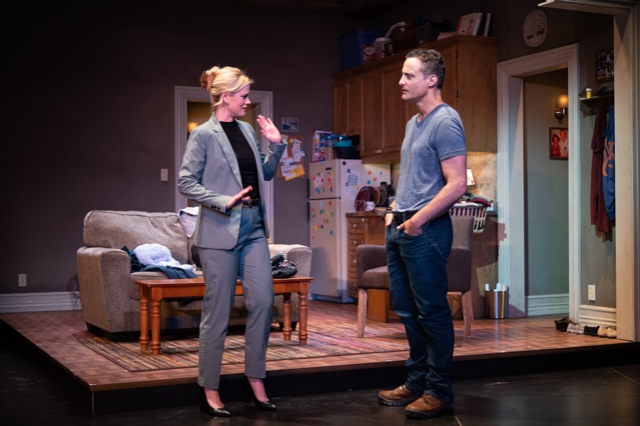 Jasper, a new play by Grant MacDermott, playwright in residence at Yonder Window Theatre Company, pack a deep punch. Giving birth to a child who is damaged is a blow to parents, who seldom have the skills to deal with cystic fibrosis, cerebral palsy and autism. In Jasper, MacDermott  chooses not to name the disease. He does not present us with their child.

The director Katie McHugh skillfully gives us a sense of Jasper’s presence in silhouettes and the shape of hospital beds and feeding tubes. There is a healthy young boy who Drew meets by accident. We do not meet him either. His baseball rolls onto the stage and so does his miniature car.

Most playwrights depend on dialogue to reveal character and advance the story.  This is particularly helpful in Jasper.  The only way it is possible for a couple to survive the complex world in which a child does not grow and slips slowly toward death is to talk it out.  MacDermott captures both the joy and the horror of this process in language which is often direct and always touching.  Even when death itself is discussed.

The play is not as gloomy as it may sound.  Often humor bursts in, particularly in Shayla, played with zip and a frank approach that’s often funny.  Abigail Hawk is terrific in the role.  Diretor Katie McHugh has encouraged her to turn on a dime, switching from caring mother to tough, working Mom under pressure. These moments are punctuation in scenes where the inevitable conclusion slides by us.

Focus is on the couple, Drew (Dominic Fumusa), a construction worker and his wife, Dre (Jessica Pimentel).  While Dre is more conventionally maternal and takes pleasure in caring for her son, Drew is an interesting man, who ia decent and kind.  He is willing to explore all options and does this with a tenderness we don’t usually associate with men.

Dre is the bond  and the brick. She clearly loves her son, who has not spoken in eight years and who cannot be hugged because he is only alive with support from tubes and wires  and medications.  What gives him life also prevents contact.

Early on, we have hope that the boy Jasper will be admitted to a clinical trial and may improve. It is a ‘last resort trial.’ But 'last resort' is better than no resort and death.

Drew meets Shayla, an attractive divorced single mother.  Most men would gravitate to her quickly, but Drew loves his wife and is not about to betray her. It is Shayla's son that draws him, a boy that can climb on monkey bars and play catch. A typically irritating, loveable, very nice young boy who is captivated by Drew’s attention.

Drew keeps these new friendships from his wife.  He lies to do this. The lies make it seem like he is doing something illicit.  His wife defines what this is:  he is taking time away from her and away from Jasper.

Drew suggests that they have another child.  Andrea does not know if they can manage.  Yet an opportunity rises amidst the chaotic demands of home life.

The set by Michael Gianfresco is a clever combination of living room, hospital room, subway car and park.  The central living room is on a platform and the actors step off it to exit to the next scene instead of going through doors.  It works.

MacDermott has a gift for language and dramatic possibility.  Director McHugh takes full advantage of this gift.  Yonder Window Theatre Company is committed to cross cultural relationships and is supported by the Grace Street Creative Group.