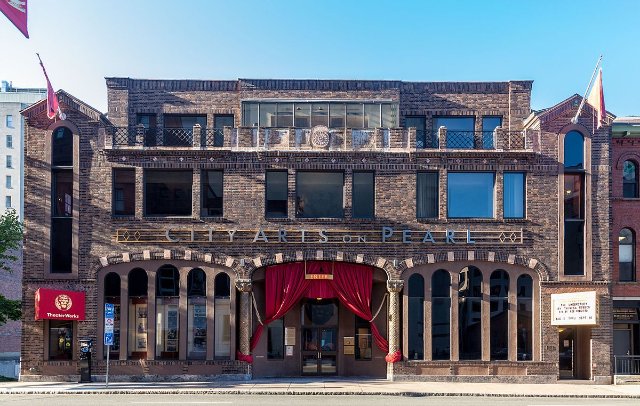 Carpenters are building sets, actors are learning lines, dancers are rehearsing routines, and the front-of-house people are preparing.

The fall theater scene in Connecticut is starting. For some of Connecticut’s professional theaters, it is the start of a new year, and for others, it is the finishing of a season that began in the spring.

The theaters and their leaders have learned much from the past years. Cautiously optimistic characterizes their outlook for the coming season. Throughout the pandemic, each theater has been carefully monitoring and listening to its subscribers and ticket buyers.

A year ago, when TheaterWorks Hartford and MTC (Music Theatre of Connecticut) and others began their seasons, ticket sales were down. At the same time, they were hearing that audiences missed the magic of live theater.

“Audiences told us they missed the communal experience of live theater,” Rob Ruggiero, artistic director of TheaterWorks Hartford said. This comment was echoed by others with Ivoryton Playhouse’s Executive Director Jackie Hubbard adding that audience members are “grateful to be back.”

Some theaters estimate that 20 to 50 percent of their normal audiences were reluctant to return last fall. But, as concerns about the pandemic have waned throughout 2022, ticket sales have slowly been rising. Some theater goers may still feel uncomfortable being in public with large groups, but at the same time established protocols have evolved and theaters have become adept at following and implementing the latest science when it comes to keeping their patrons safe. Some still check vaccination records, some require masks. Others have made masks optional and are not checking vaccination, depending on the latest COVID trends and the concerns of theaters’ specific clientele.

Adjustments to schedules and productions continue. Both TheaterWorks and Westport shortened the run of the productions. But for many theaters, decisions and even contracts had been made as long ago as 2019. This has been the case at Westport Country Playhouse. Managing Director Michael Barker pointed out that the 2023 season, which has just been announced will be the first one without any pre-2020 commitments to artists or productions

Hartford Stage, Goodspeed and MTC are opening with shows that have high name recognition and a proven track record of audience appeal. They are also lighter in tone. For Hartford Stage, it is the Agatha Christie mystery, The Mousetrap (Thursday, Oct. 13 to Sunday, Nov. 6). The mystery ran for decades in London.

Kevin Connors, artistic director of MTC, is in rehearsals for Sunset Boulevard, the hit Andrew Lloyd Webber musical of the well-known film. He selected the show, which hasn’t been done in Connecticut for many years because it combined two elements that he loved – old Hollywood glamour and film noir. Of course, the fact that it was a blockbuster hit didn’t hurt either.

“I thought people wanted to see something a little lighter, just to remind them what they love about theater,” Connors said. His comments were echoed by Westport’s Artistic Director Mark Lamos when introducing next season. “Inspired by our audience, we’ve decided to lift up everything we love about theater and find joy together.”

Hubbard – whose next production at Ivoryton is a play version of The Great Gatsby – said her audiences indicated they are “looking for entertainment…. redemption and happy endings. They have gone through enough over the past two years.” She added that ticket sales for the Johnny Cash musical, Ring of Fire which closed recently had been strong.

All acknowledge that some audience members may be lost for another few years or completely. TheaterWorks sees it taking two to four years to return to pre-Covid numbers for subscriptions and ticket sales.  Most theaters report that sales have slowly climbed. Westport was hard hit last fall when their first live production, Doubt, opened as the second wave was beginning. Barker said that Westport, which runs from April to November ideally would have waited another six months (until this fall) to reopen, but it was not possible. “Nobody was paying us to stay closed indefinitely,” Barker said. However, he noted that audiences have been returning, “but not as quickly as we would have liked.” Ultimately, he believes things will be even better than before.

The exception to this is Goodspeed. Artistic Director Donna Lynn Hilton said the theater is back to pre-pandemic capacity, which, she admitted, surprised her. One audience member, told her “Don’t tell our kids, but Goodspeed is what we missed the most.”

Goodspeed is opening 42nd Street on Sept. 16 which will run through Sunday, Nov. 16. The Tony-winning show is light with lots of dances and familiar songs. It should delight audiences.  ACT-CT in Ridgefield is doing another classic musical, Guys & Dolls from Thursday, Oct. 27 to Sunday, Nov. 20.

But that doesn’t mean all the offerings are light and funny. TheaterWorks Hartford is opening with the Tony-winning musical Fun Home based on the graphic novel. The story of a family with secrets is innovative and thoughtful. It will run from Saturday, Oct. 8 to Sunday, Oct. 30.  About the production, Ruggiero said, “.”It’s a big investment, but we’re confident that we can offer our audience an incomparable experience in our intimate space.”

A play with music, The Last Day at Emerson’s Bar & Grill is opening the season at Playhouse on Park in West Hartford. The one-person show features the songs that Billie Holiday made famous but tells the story of her disintegration while performing at Emerson’s. It runs Wednesday, Sept. 28 to Sunday, Oct. 16.

The play is the same, but the two productions of Who’s Afraid of Virginia Woolf? should be quite different. The first to open is the Madison Lyric Stage production in their new tent. This small theater has seen audience growth this year with the addition of the larger fully enclosed tent. In fact, their audiences have been larger than ever, according to Marc Deaton, the artistic director. Because they have a larger performance space, they had hoped for even larger audiences. This Who’s Afraid runs from Thursday, Sept. 15 to Sunday, Sept. 25.

Westport is closing its season with From the Mississippi Delta, an inspiring story of a young woman who went from picking cotton to college in the North. It runs from Tuesday, Oct. 18 to Saturday, Nov. 5.

At Connecticut presenting theaters – the Bushnell and the Shubert– it will be a diet of musicals, most recently on Broadway. Mean Girls (Tuesday, Sept. 27 to Sunday, Oct. 2), and Aladdin from Tuesday, Nov. 8 to Sunday, Nov. 13 are at the Bushnell while the Shubert presents My Fair Lady from Wednesday, Oct. 19 to Saturday, Oct. 22 at the Shubert.

Perhaps the most challenging task was Ed Wilhelms’ whose Drama Works Theatre Company in Old Saybrook opened just last year. The small (40 seat theater) managed to present seven shows. This fall, Painting Churches (Friday, Oct. 21 to Sunday, Oct. 23) and The Housekeeper (Friday, Nov. 11 to Saturday, Nov. 19) are scheduled. Wilhelms said he selected stories that audiences can talk and argue about afterwards; that make an impression.  I want plays that will move people artistically and reveal some truth, but as a new theater, we needs to build an audience. I can’t do plays that are artistically beautiful if no one comes.”

TheaterWorks will continue its virtual content as long as it is possible, and Westport plans to continue its streaming of the Script-in-Hand series and its collaboration with WSHU. Both Ruggiero and Barker mentioned that these are dependent on union permission. Barker said that many of the companies that license productions are no longer licensing streaming rights with live stage rights.

Hubbard may have summed it up best for all the theaters with two comments, when she said, “We were very grateful to receive funds from the state and federal government to help us through the worst. We are also very grateful to our supporters who stepped us to help us stay afloat.

She mentioned a challenge that is affecting many businesses: difficulty in getting enough staff. “The hardest thing for us right now is finding staff to help us move forward; we have big plans for next year.”

All the theaters expect that this year will be stronger than last. But, they all expect to adjust to the new “normal” in audience preferences; ultimately, Barker said, “things will be even better than they were in the ‘before times.’ It will just take a lot longer than anyone expected.”