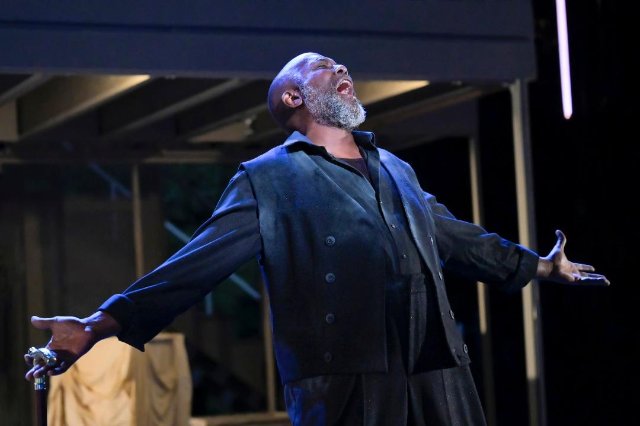 James A. Williams as Lear. Photo by Kevin Berne.

In one of Jack Nicholson’s lesser-known films, “About Schmidt,” he plays a retiring white-collar worker.  At his retirement party, his successor says that he will be in touch to call upon Schmidt’s expertise.  Of course, the call never comes.  Extending the treatise on transition of power, I had several friends and competitors during my international banking career who jumped from prime banks to lesser ones, drawn by bigger salaries.  They were surprised that their prestige declined and fewer invitations were on offer, even from business “friends.”  They didn’t realize the power of what is said on the business cards we carry.

So it is with King Lear.  Although rigid and demanding undivided loyalty (sound familiar?), he plans his succession by transferring his properties to his daughters before his dotage, while retaining his title.  What he is oblivious to is that his properties were the primary source of the loyalty he received and the control he exercised.  His descent and conflict with his heirs and subjects commence.

Critically, Gardley moved the action from England to San Francisco’s largely Black Fillmore District in 1969, where jazz was king, and The Fillmore was known as “The Harlem of the West.”  It was a time of great social conflict and transition that included counterculturalism, the Vietnam War, the Black Panthers, civil rights clashes and advances.  The result of the Cal Shakes produced, Eric Ting and Dawn Monique Williams directed work is stunning - a compelling version that retains all of the gravity of the original while embellishing it with touches that enhance its modern relevance.

Lear is an imposing figure with gruff mannerisms, knee-jerk emotions, and a passion for vengeance.  James A. Williams portrays the king with consummate skill.  As Lear, Williams displays unflinching absolute authority as he divides up his estates.  At his urging, the king’s two older, married daughters, Goneril and Regan, obsequiously avow their unconditional love for their father to ensure their inheritance.  But when the youngest, the earnest Cordelia, says she can profess no additional love above that which she’s given all her life, Williams scowls and howls and his character dispossesses her from any inheritance or dowry.

Lear foisted the condition on his heirs that he spend 50 days in each of their households, but as they impose discomforting restrictions on his stay, he realizes his error in judgment.  The sycophants were dishonest, and the emperor has no clothes.  Here, Williams deftly displays incredulity with both plaintiveness and indignant rage.

Civil war will erupt, and Lear will realize, too late, that Cordelia, now married to the good Duke of New Orleans, was truly honest and loving.  Throughout the story, this theme of perception versus reality recurs, revealing how flawed our decisions can be when we fail to scratch beneath the surface to find the elusive reality.

Transposing a work to a new time and locale is a tricky exercise.  At one extreme, the goal is to overlay new visuals without disrupting the original narrative at all.  At the other, the viewer is totally transported to a new environ to the extent that the connection between the new and old work is merely symbolic (e.g., is “West Side Story” really just a remake of “Romeo and Juliet.”?).

The author takes a somewhat challenging middle ground.  While preserving names and the bulk of the text, he adds framing devices including narration, extra characters, and musicians to imbue the piece with local color and Black experience.  Racially-charged incidents, like The Fool’s story about the Ku Klux Klan, are referenced.  As a result, the viewer may suffer ambiguity, sometimes processing the central action as in Middle Ages England, but then being mentally yanked into perceiving 20th century United States.  That said, this overlay produces stirring effects.

The action plays against Tanya Orellana’s appropriately functional two-story structure, while highlights are brought into focus by Scott Bolman’s striking lighting design.  As sheer entertainment, period music adds a delightful dimension.  Some songs are specifically relevant and delivered as stand alones, like “It’s a Family Affair” and “Stormy Weather.”  At other times, music accompanies dialog.

The delivery systems for almost all of the music are fascinating.  A luminous and talented Velina Brown provides much of the singing.  Designated as Black Queen, she appears like an apparition in a full-length, white, formal gown, serving various functions from narration to the dance of death.  One assumes that the crazy idea to combine a trombone and a standing bass as the two instruments to provide musical background came from the composer of the incidentals, Marcus Shelby.  What genius!  The twosome are spectacular in producing a jazzy Fillmore feel.

Political commentary in the narrative appropriately focuses on the Geary Expressway, which was built in the '60s as an urban renewal project with virtually no consideration of the wants of the affected people.  Its stated non-transportation goal was to eliminate blighted and crime-ridden areas.  However, it destroyed much of the vital Fillmore District; split what remained; and caused a diaspora of the Black community from the place they loved.

Regrettably, the author uses a little misleading shorthand in his narrative, blaming “the mayor” for the debacle.  Most viewers will be unfamiliar with the particulars. Joseph Alioto was mayor in 1969, but the project took place under the previous administration of George Alexander, who happened to have a fine civil rights record.  If there is a true villain with perhaps questionable motives, one might look into the history of Justin Hermann, then head of the San Francisco Development Agency.

In any event, Marcus Gardley’s “Lear” is phenomenal in conception and breathtaking in execution.