Another Openin', Another Maestro 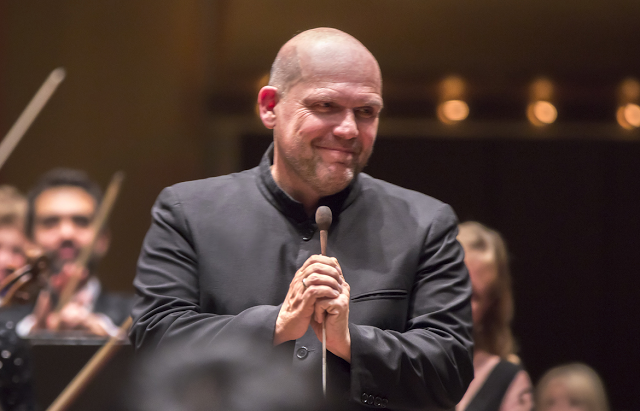 A New Conductor at the New York Philharmonic

The changing of the guard at any major symphony orchestra is  long and complicated. For the New York Philharmonic, who are in the process of installing the Dutch conductor Jaap van Zweden as its new music director, that transition took another turn on Tueday night. Van Zweden is not quite "here" yet. He will start his first official season with the orchestra in 2018 and conduct a few subscription concerts this year. Meanwhile, he will divide this season between New York, Hong Kong and Dallas, where he is in the final year of his contract.

For this program, the music director designate chose former Philharmonic music director Gustave Mahler's Symphony No. 5 instead of the usual potpourri of lighter pieces. This signifies a seriousness of intent and a desire to steer this orchestra back to what it does best: big, burly pieces that are familiar to audiences and still present opportunities for adventurous music-making. And so it was with this Mahler, whose five movements followed the traditional season-opening performance of The Star-Spangled Banner.

Van Zweden chose a moderately fast tempo for the opening bars of the Marcia funebre, a dour processional built around a four-note trumpet call that makes its first appearance in the composer's Fourth. (This is in itself a permutation of the insistent four note "door-knocker" theme that opens Beethoven's Fifth.) Mahler has it answered by the crash of cymbals and the chug of cellos, bass and finally, contrabassoon and tuba. It is one of Mahler's most dramatic openings and requires great concentration and purity of tone from the principal trumpet if it is to come off.

The orchestra responded to the call of the trumpets,  stretching like a large, hungry animal before going on the hunt, through the march rhythms, which slowed in tempo as the movement progressed. They were answered by comforting, lyric phrases in the strings. What was most notable here was the conductor's comfort, applying rubato where he thought it necessary and getting generous results back from his new orchestra. One could hear the gratitude in the Philharmonic players, who can be a fickle bunch in big pieces like this one.

Finally the development came,  a rending Mahler "horror" chord and a swift careening variation with the march speeding up into a panicked run. Van Zweden pulled and stretched the music here with a growing sense of confidence, bringing the orchestra safely through this emotional outburst and finding its feet again with the massive recapitulation of the opening "funeral" theme. The best playing came in the coda, which raced abruptly forward only to end in a few shuffling, muffled notes.

That sense of  confidence continued in the second and third movements. The first of these is a bizarre structure even by Mahlerian standards, with three themes fighting to squeeze into the music and arguing with each other for the listener's attention. In the central Scherzo, a loping horn theme leads to a kind of faux-pastorale dance in the woodwinds. This in turn creates a promise of eventual emotional transfiguration: the funeral is over and life is about to go on. Van Zweden did not give the audience a chance to catch its breath, piling movement upon movement with professional skill and an eye for drama that had not been apparent in his past appearances.

The Adagietto is the fourth movement and remains the most famous thing Mahler ever wrote. However, to excise this work from its context robs it of its function, which is to transform the agonies of the first three movements into something optimistic and hopeful. Mahler wrote this movement as a portrait of his wife, and in it shows her function in his hectic life. Van Zweden conducted with a nod to this legacy, leading a slow and translucent performance that was followed by the fugal finale. Here, conductor and orchestra made joyful music together at last. Long may this arrangement continue.

(Reprinted by permission of Superconductor).