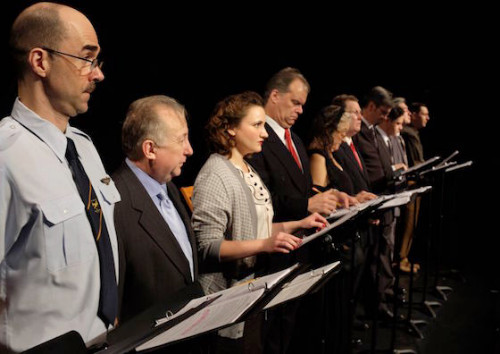 A staged reading of Geneva. Photo by Dylan Stuckey.

In Geneva, a little known political drama by George Bernard Shaw, the dictators who start World War II are summoned before the international Court of Justice in The Hague to be tried for crimes against humanity. But before the dictators appear, we enjoy 90 minutes of dialogue about democracy, corruption and humanity, written as only GBS could do.

Shaw Chicago's new production of the 1938 play is another in its concert readings, performed by 12 costumed actors who clearly revel in the richness of Shaw's dialogue and characterizations. Director Robert Scogin takes advantage of the script's humor, political passions and ethnic stereotypes to stage a production that is funny and smart, and loaded with Shaw's diatribes against every form of political organization and chicanery.

The play opens in Geneva, in the office of the International Committee for Intellectual Cooperation, where nothing intellectual ever happens. The committee's secretary, Begonia Brown (Jhenai Mootz) is cheery and helpful to the complainants who file in. A Jew (Will Clinger) complains that his home was destroyed and he can't return to his native Germany. A widow (Kate Young, in a campy melodramatic performance) threatens revenge upon those who assassinated her husband, the president of the Republic of the Earthly Paradise (located somewhere in South America). An English bishop (Skip Lundby) arrives to complain that Communism is being taught in his diocese. And a Russian commissar (Jack Hickey) says that a dangerous organization is at work in Russia to overthrow the Soviet system and install the Church of England. Miss Brown dutifully forwards their complaints to the Court of International Justice, preparing the way for the rest of the story.

Political dialogue and machinations continue for several scenes. In the office of the League of Nations, the League Secretary (Nick Polus) and the British foreign secretary (Richard Marlatt) discuss the complaints. The Judge (smartly played by Gary Alexander) describes the coming trial. It turns out that Begonia Brown, whose political statements have a Sarah-Palinesque quality, is running for a seat in the House of Commons and later is named a Dame of the British Empire.

The final scene is the trial at The Hague. The three dictators arrive one by one to face judicial scrutiny: Bombardonne (Charles Stransky) and Battler (Jonathan Nichols) and finally General Flanco de Fortinbras (Matthew Fahey), who has already "devastated the strongholds of the enemies of my country, and slaughtered their inhabitants," as Francisco Franco did in the Spanish Civil War, which was nearly over by the time of Geneva's production.

Shaw is critical of all politics but really only mildly critical of the politics of these buffoons, whose ideas and militarism will soon bring about a world war. The Judge, who seems to speak in Shaw's voice, says at one point, "None of you seems to have any idea of the sort of world you are living in. Into the void created by this ignorance has been heaped a groundwork of savage superstitions: human sacrifices, vengeance, wars of conquest and religion, falsehoods called history, and a glorification of vulgar erotics called romance which transforms people who are naturally as amiable, as teachable, as companionable as dogs, into the most ferocious and cruel of all the beasts. And this, they say, is human nature!"

The play ends with the ultimate deux ex machina, involving quantum physics and astronomy. There's a slightly hopeful thought at the end.

The 12 actors' performances are generally fine, although a couple of the characters chew up the scenery with their over-the-top characterizations. We are watching a concert reading, but the actors have a strong grip on their roles and references to their scripts are not obvious. Clinger, Young and Alexander are especially strong in the roles of the Jew, the Widow and the Judge. Joe Lehman adds comic relief as the Journalist.

Shaw wrote this play in the late 1930s and its first productions were in Warsaw, Poland, and Malvern, England, in 1938. He tried to keep up with world events by updating the play but finally gave up in the late 1940s. Geneva is considered one of his "plays political" and sometimes is not even listed among his work, which included about 60 plays during his long life.

Shaw Chicago's production of Geneva continues through Sept. 28 with performances at 2pm Saturday and Sunday and 7pm Monday at the Ruth Page Theater, 1016 N. Dearborn St. Tickets are $30 and can be purchased online or by calling 312-587-7390.