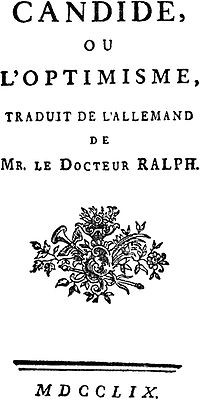 Original Publication of Candide in 1759 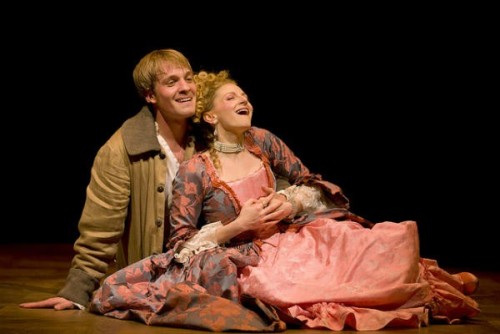 Geoff Packard as Candide and Lauren Molina as Cunegonde

McCaela Donovan as Paquette and Lauren Molina as Cunegonde, Photos by Liz Lauren. 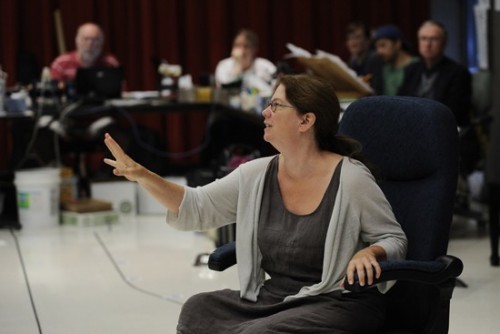 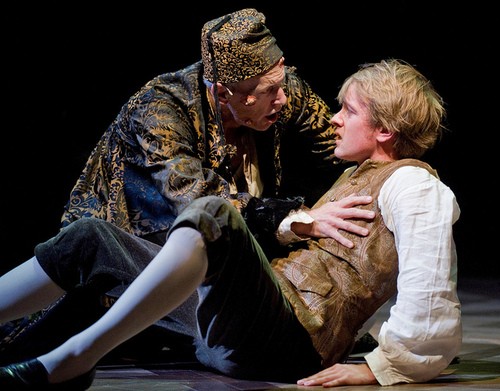 Larry Yando as Dr. Pangloss and Geoff Packard as Candude 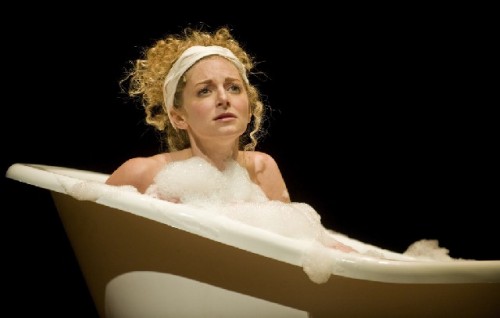 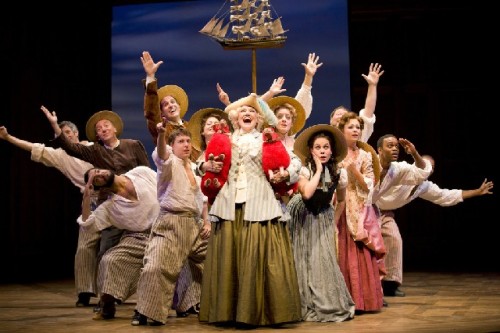 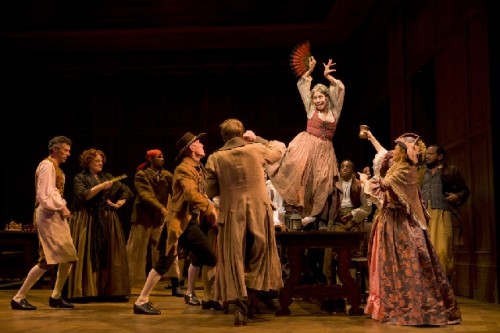 To celebrate the Huntington Theatre Company's 30th Anniversary, the satirical picaresque Candide was chosen as its season opener. Voltaire's popular classic of episodic adventures of the lowly born but earnest Candide. The wonderful score created by Leonard Bernstein in 1956 now has an equally great storyline and staging to go with it at the Huntington. This is a can't miss wonderful production that puts smiles on the faces of each lucky audience member.

Since the late 1950s, Candide has been characterized as a wonderful score with a weak book. Most critics consider Leonard Bernstein's music for Candide his best work. The problem was the story or how it was being theatrically interpreted often felt dated and simple-minded.

In this adaptation, Tony Award–winning director and writer Mary Zimmerman has reordered the sequence of events to be more faithful to the novel’s original structure. Here, Candide and his various colleagues wrestle with unfair snobbery, arrogant pedantry, war, pirates, bigotry and Inquisitors, along with thievery, prostitution, syphilis, leaking ships, and deception.

Controversial when it was published (all of his writings were controversial when they were published), Voltaire's Candide (1759) is a picaresque. Originating in 16th Century Spain, the novel form was a popular sub-genre of prose fiction which is usually satirical and depicts, in realistic and often humorous detail, the misadventures of a roguish often naive hero of low social class who lives by his wits or luck (often both) in a corrupt society.

This version of Candide is all these things and a lot more. Everything about this production is richly depicted and directed. The sets and stagecraft are clever, the music is beautiful--both sung and instrumental, and the performances are wonderful. This elegantly professional production brings the total theatrical package to the stage.

The story set in episodes or vignettes begins with Candide, Cunegonde and her brother Maximilian taking a lesson from Dr. Pngloss in the opulent Westphalian estate of Cunegonde and Maximilian's father. Candide had been taken in as an infant and raised along with the others, but he was constantly reminded of his humble birth. Cunegonde and Candide are discovered being improperly intimate by her parents, and Candide is immediately banished. Candide then goes on his journey of  discovery.

Each of the musical play's episodes follows Candide on his journey. Soon he is secundered into an army and shortly involved in war. Next he travels throughout Europe, on to South America, back to Europe and then to Turkey. Surprising experiences with more twist and turns then an amusement park roller coaster befall him and his cohorts along the way and in parallel. Most problems and issues are resolved at the end of this life journey.

This is a play of the Enlightenment, and through satire, irony and at times brilliance, Voltaire enlightens us. Maestro Bernstein's brilliant score underscores delight as well as a sense of gravitas to the production.

Even though there is not a weak performance in any of the large and talented cast, of particular note are Lauren Molina as Cunegonde and Geoff Packard as Candide. Spectacularly, the voice of Lauren Molina is magnificent. Her musical gift literally fills the theatre with joy. Geoff Packard's characterization of Candide is believable and his voice is melodius and vibrant. These two are first class talents.

Erik Lotchefeld as Maximilian and in other roles perfectly minces around and often is munching on the scenery. Larry Yando as Pangloss is spot on. His academic arrogance and philosophical rigidity are absurdly and optimistically portrayed. Pangloss' opposite philospher number is Martin portrayed by Tom Aulino in a sad sack and perhaps rightly depressed negative manner. Together they form a more balanced individual sense shaping Candide's and the audience's perspective. They give the once alarmingly insouciant Candide a more realistic world view.

The stagecraft is superior. Daniel Pelzig's choreography is excellent; movement is elegant and beautiful. Each change of scenery designed by Daniel Ostling is brilliantly created to minimally express the location of that particular stop on Candide's journey. The lighting design by T.J. Gerckens enhances the sets and scenic expressions.

Costume designs are knockouts. The variety and quality of the costumes by Mara Blumenfeld enliven the characterizations and underscore the sense of place and time of each theatrical sequence. In addition, the clever elements and minatures, like spurts of abstract blood, warfare bombardment and ships perishing at sea, animate the scenes and bring delight to the audience.

Zimmerman, whose Candide premiered at Chicago’s Goodman Theatre a year ago to great reviews, has made a career out of staging adaptations. These include The Notebooks of Leonardo da Vinci, The Odyssey, The Arabian Nights, and Metamorphoses, based on Ovid’s poem. In addition to winning a Tony for best director for Metamorphoses, Zimmerman was a 1998 MacArthur Fellow. Previously, she directed the Huntington’s productions of Journey to the West and A Midsummer Night’s Dream.

Balancing the music, story and stagecraft, this may be the penultimate version of Candide. What a wonderful way to open the season. Bravo Mary Zimmerman. Bravo to the Huntington Theatre Company.