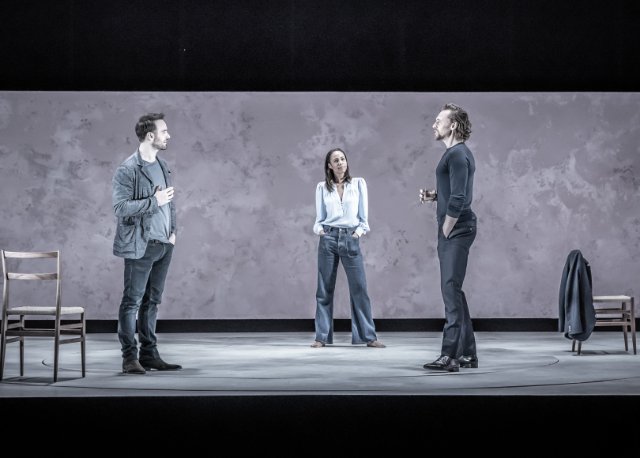 Director Jamie Lloyd has given us a startlingly fresh revival of Harold Pinter’s The Betrayal now on Broadway through December 8.

He is blessed with a fine cast to carry out his vision of the consequences of a long-term affair between a wife (Emma) and her husband’s best friend (Jerry).

Pinter tells this story with a twist – the play begins two years after the affair has ended, and ends as the affair is beginning.

The play opens with Emma and Jerry meeting for a drink after the affair ended. It is both awkward and flirtatious. The conversation focuses on the mundane (Jerry’s wife and children) and Emma’s husband and children, but between the pauses much is not being said.  Emma finally admits that she and her husband, Robert are divorcing and that when he confessed to an affair, she told him about hers.  Jerry is not pleased about her revelation.

Throughout this scene, Emma, played by Zawe Ashton is flirtatious. Is she trying to rekindle the romance or is that just her way of acting? Zawe gives us lots of tossing of her long hair and self-satisfied smiles as she suspects Jerry still wants her. Charlie Cox as Jerry is uncomfortable; one might suspect that he did not really want to meet. Yet he too feels the spark.

Slowly as we go back in time, we learn more about this couple and Emma’s husband as much through the mundane interactions as through Pinter’s famous pauses, which can sometimes be overdone. Here, however, they seem perfectly natural.

We learn that Jerry is a literary agent, Robert a publisher and Emma runs an art gallery. Yet we never really learn why the affair happened; we know there was a spark of passion but why it turned into a long-term affair (they even rented a flat in which to meet) isn’t clear.

It is that unanswered question that makes the play so fascinating.

Lloyd has staged the play on a simple set – only two chairs and a table adorn the set. The actors move the chairs around. Sometimes they sit uncomfortably close together and at other times so far apart they could be different rooms.

In addition, Lloyd has all three main characters on stage at all times. In the beginning, while Jerry and Emma are meeting, Robert is upstage – almost as though he is spying on them.

Yes, there is another character; a waiter who serves Jerry and Robert lunch in one scene, and a young girl (Emma and Robert’s daughter) who makes a very brief appearance.

But this is about the triangle. This isn’t a tragedy; no one seems mortally wounded by the affair; it is very “stiff upper lip” British reticence. Yet you are constantly wondering what is going on beneath the facades.

This is where the actors have to reign supreme. I’ve seen several productions of this, most recently with Daniel Craig, Rachel Weisz and Rafe Spall directed by Mike Nichols.

This production far outshines it. The simplicity of the set forces you to focus on the actors.  In each case, the actors give us a depth of performance and emotion that propels you into them and their world.

While Tom Hiddleston seems in control at all costs as Robert, his anger and turmoil come out while he is silently watching the reunion, while dining with Jerry and at other times. The same is equally true of Zawe Ashton and Charlie Cox. When you leave the theater, you think you know these characters and yet, you are still questioning their realities and feelings.

While Pinter is sometimes regarded as “cool” or “cold” it is not because there are no strong emotions, but that they seem so deliberately revealed that it can appear as though they don’t exist. Here, with these actors, it is still cool and controlled but you know the turmoil underneath.

Unlike some productions, you will swing between identifying who is the “good guy” and who is the “bad guy” – there are no easy answers.

The spare set – just a beige/brown wall and minimal props  by Soutra Giolmour (who also did costumers) puts you attention totally on the performers as does the lighting design by Jon Clark and the sound design (a music composition) by Ben and Max Ringham.

This is a production that should not be missed.

Betrayal is at the Bernard B. Jacobs Theatre, 242 W 45th Street through Dec. 8. For tickets visit Telecharge.Courtesy of Two on the Aisle