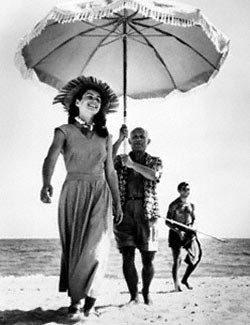 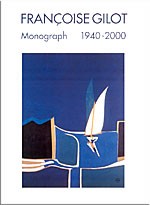 A catalogue of her work. 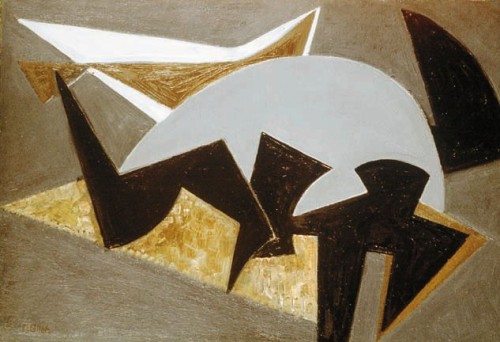 A painting by Gilot. 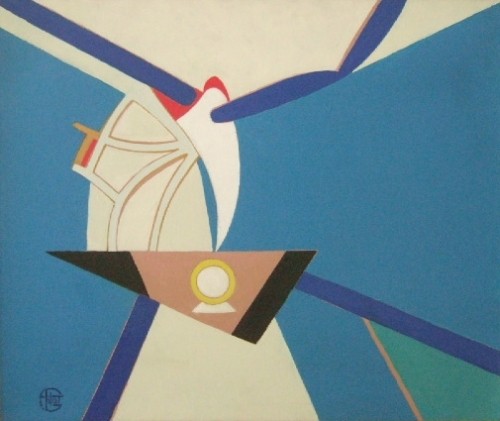 Many women have played an enormous role in the study of Pablo Picasso, the man, as well as the artist. The endless succession of women, from the very early phase of Fernand Olivier, the beloved Eva who died of consumption, a tragic marriage to the Russian dancer, Olga Koklova, to a teenager, Marie Therese Walter, the artist photographer, Dora Maar, the long period of Francoise Gilot, and the eventual marriage to Jacqueline. Who knows how many countless others defined periods and shifts in the work. William Rubin, for example, outed the identity of the famous, Woman in White, from a classical interlude, one of the artist’s most tender and stunning paintings, as inspired by Sarah the wife of the American millionaire and dilettante Gerald Murphy.

So much has been written about this parade of women that we tend to think that we know them personally. It is Fernande this, and Marie Therese that, or Dora whatever. Like an endless round of artsy gossip all layered over by ersatz art history that disguises it as something other than voyeurism. Why are we compelled to look in the bedroom and peep at the diaries of the women? On the other hand, we know little, and care less, about the affairs of virtually all other 20th century masters with the rare exceptions. For example, Pollock and Ruth Klingman, Diego Rivera and Frida Kahlo, Dali, Gala, and the transexual, Amanda Lear, Warhol’s factory with self serving, tell all books, today a virtual industry.

There have even been some rather serious attempts to deal with the Picasso harem. Art historian, Judi Freeman, produced an insightful exhibition and catalogue, “Weeping Women: The years of Marie- Therese Walter and Dora Maar,” in 1994.

I have read an inordinate amount of this material. Starting with the early biography of Roland Penrose, through Gilot’s book, which, at the time, I rather thoroughly enjoyed, the two volumes of biography by John Richardson, so far the best  source, the early book by Fernande, a rather slim and disappointing volume. And I confess to having plowed through some of the worst books ever written on an artist. Having skewered Picasso rather thoroughly in her own tell all book, Gilot had even more dirt to dish to Ariana Stuffeduppopulist Huffington.

The most interesting of the women appears to be Dora Maar. She caved in the least to his machismo. But the book on her, by James Lord, says more about the author than his subject. The worst of all possible books, a cut and paste job of the most putrid kind, was assembled by Norman Mailer.

Why, I continue to ask myself, wast time on such garbage? Well, the argument goes, to gain some further insight about a a great artist. We share a birthday, October 25. Which is also the birthday of Dr. Jonas Salk, who Gilot married once she had, “Survived, “ Picasso. I had long imagined that fate would bring me together with Gilot, another October 25th, what an incredible coincidence, Scorpio, in her star crossed life. That did indeed happen, recently, but not at all as imagined.

When I first read Gilot’s book, some years ago, I enjoyed it rather uncritically. I was all too willing to accept her view of the great man as a flawed, bullying, heartless monster. It rang true and one felt enormous sympathy for her and the fate of their two children. The followup book, by Huffington, which could not have been written without Gilot’s considerable input, seemed more raw and vindictive. Huffington, clearly, never loved the man and knows little about art. So it was purely an attack on the man and his character that revealed nothing about his accomplishments as an artist. Which should be our motive in reading a book about a creative genius. In trashing the man, and destroying the monument, this does nothing to diminish the work itself.

Then there was the movie, “Surviving Picasso,” of which the only memorable aspect was another brilliant performance by Anthony Hopkins. By this time, Gilot was wearing thin for me as a petty opportunist, of limited talent and insight.

It was with curiosity that I  learned of a Gilot show of her early work, as well as lecture and reception, including a promised, “photo opportunity,” scheduled for the Mullen Museum at Boston College.

Arriving early for the Sunday event, the park lot was already full. A departing artist gave me a couple of tickets to the lecture. They proved to be rare and valuable. A crowd arrived to find the lecture, “Sold Out.” This included VIPs who were shocked and disappointed to be turned away. Two colleagues beseeched their, “friend,” museum director Nancy Netzer, through a locked glass door. She pantomimed a polite, “no way,”  then went back to mingling with her guests. Outside the VIP suite, where they were stenjoying cake, there was not so much as a cookie, or glass of water, for the many patrons of the lecture/ reception.

When I asked a curator for a copy of the catalogue, about $20, the request was denied. “We didn’t publish it,” was the response. So, if this review lacks detail, it’s because the museum i failed comp the media. The Boston Globe published a puff piece interview with Gilot. The museum had also turned down my request for an interview. There are so many questions I had for her. I said to the curator, Stoney Conley, “So, I guess that means that you are offering me absolutely nothing for my effort to cover this exhibition.” He just looked at me without comment.

At least, I satisfied my curiosity by viewing the exhibition which proved not to be memorable.  I observed them long enough to resolve some major points. Apparently, despite her claim otherwise, she did not “ Survive” Picasso. Every aspect of the work reflects what she learned from the master, while not absorbing that other great monument, Matisse, when, as Picasso’s femme du jour, they visited his studio. There is painfully little Gilot there amid all the ersatz Picasso and Matisse, except a few glimmers of what might have been. She did have some ability to draw in a pretty manner. She would fit into the sad category of what Richardson has dubbed, Salon Cubism. Or, as one art world colleague, who was shut out of the lecture, commented after seeing the work, “She is a dreadful artist whose work compares unfavorably to Bernard Buffet.” That’s a little harsh, after all, even Buffet had his moments.

Debating whether, or not, to stay and fight my way through a mob of desperate non ticket holders, I eventually found a seat in a VIP row up front. If anyone asked, I was just prepared to say, “Press.”

Then I spotted her in the front row. Firing up my cameras I made my way to a crouching position in front of her. Just as I aimed my camera I found it focused on the saffron colored, chiffon ass of the museum director. Like the Secret Service stopping a bullet from an assassin, Moi.

I appealed to Gilot, actually made eye contact, and produced my credentials. All to no avail. She shrugged my off with a little Gallic flick of the wrist. I left summarily. There was no need to stay for the lecture. By then I had absorbed all one would want to know about the woman and artist.