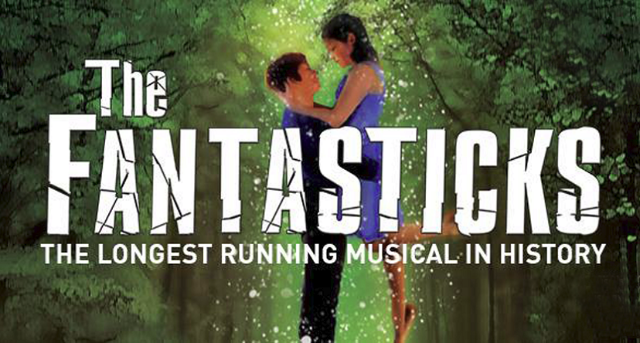 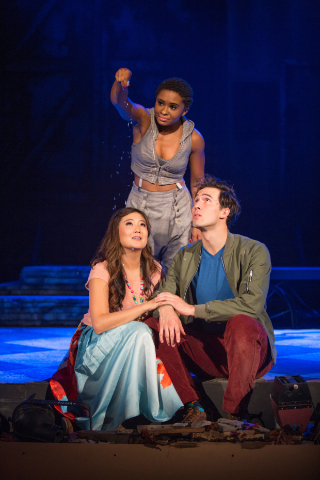 This turned out to be a good thing for the current Pasadena Playhouse production, because there was nothing to compare to their lovely, lyrical version of Tom Jones and Harvey Schmidt's modern day fairy-tale of love, loss and redemption. I knew the late great Jerry Orbach played the narrator and "bandit" El Gallo, but not much more than that.

The Fantasticks original off-Broadway production ran a total of 42 years and 17,162 performances, making it the world's longest-running musical. Wisely, veteran director Seema Sueko doesn't let that history hold her back from creating a revisionist version that works perfectly in 2016.

Loosely based on the play Les Romanesques by Edmond Rostand, the story is simple: It's about a Boy, a Girl, two Fathers and a Wall, as troubadour El Gallo states in his introduction.

It tells the story of two neighboring fathers Bellomy (an endearing, blustery Regi Davis) and Hucklebee (the delightfully pixie-ish Gedde Watanabe) who trick their children, Luisa (played with bravado and beautifully sung by Ashley Park) and Matt (a sweetly winning Conor Guzman), into falling in love by pretending to feud and building a high wall between their houses.

The plan goes swimmingly, with the young couple virtually swooning into each other's arms, until the fathers overplay their hand by deciding to seal the deal by hiring a slightly shady bandit-for-hire, El Gallo (solid, sensual Philip Anthony Rodriguez), to stage a mock "abduction" of Luisa so Matt can become her knight in shining armor and save the day. However, no good deed goes unpunished as they say, and the outcome is a botched affair that ends with both young lovers disillusioned and angry.

Assisting El Gallo in his masquerade are two veteran theatrical actors who have seen better days. As played by Broadway and TV veteran actor Hal Linden (The Rothschilds, Barney Miller), Henry is an Actor with a capital A who mixes up his Shakesperean roles, but still steals scenes like a pro. It's wonderful to see back on the stage, his charm and wonderful voice still intact. His hapless sidekick Mortimer, played with gusto and great physical humor, by Amir Talai, enacts his "death scenes" which will have you laughing out loud.

One very important character in the show never speaks, but makes her presence felt - Alyse Rockett as The Mute. She is Ariel to El Gallo's Prospero, conjuring the magic required to turn simple pieces of fabric and metal into a wall and acting as a silent Greek chorus of one.

Act 1 is full of energetic set ups and memorable songs, including the poignant "Try to Remember" and the lovely ballad "Soon It's Gonna Rain." However, in Act 2 things take a darker turn as the two now-separated lovers eagerly set out to explore life outside their own backyards and come face to face with the treachery, evil and duplicity of the world at large. When they reunite, as you know they will, it is with a renewed depth of love and appreciation for their lives and each other. "Without a hurt, the heart is hollow," sings El Gallo.

There are so many lovely moments in this production, which is staged much differently than previous versions. Instead of a small stage with a ladder, a blanket and few props, Scenic Designer David F. Weiner creates an abandoned theater complete with cobwebs, dripping water pipes and trunks full of old props that the actors use to create their illusions. The simple accompaniment, led by Music Director/Conductor David O, consists of piano and harpist Liesl Erman, enhances the fairy tale quality of the score and choreography by Kitty MacNamee is clever yet simple as befits the story. Costume Designer Shirley Pierson, Lighting Designer Josh Epstein, Sound Designer Joe Huppert and Fight Choreographer Tim Weske complete the outstanding technical team.

This is the first show of the 2016/2017 season, which will be the last for outgoing Artistic Director Sheldon Epps, who is moving on to work his magic in Houston theatre; however, he is passing the torch into the excellent hands of Executive Artistic Director Danny Feldman, who will soon join the Playhouse family.

If you haven't seen "The Fantasticks", we  recommend taking someone you love - a spouse, child or parent - to introduce them to the magic of theatre. If you have seen it, come prepared to re-discover its charm once again. It will call to you, and you must "Follow, follow, follow..."

The Fantasticks runs through October 2.