Hand to God, by Robert Askins

At The Stage in San Jose 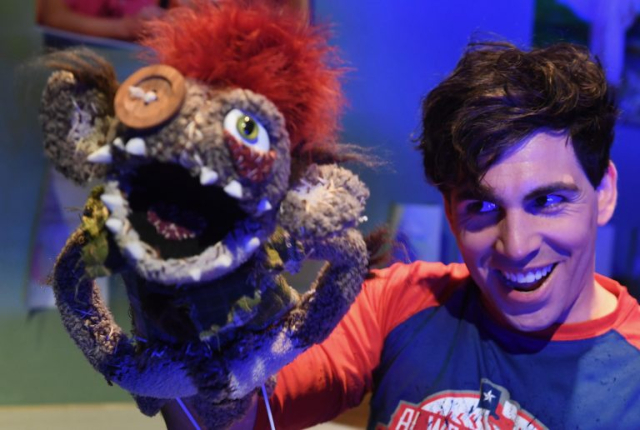 David Colston Corris as Jason with Tyrone. All photos by Dave Lepori. 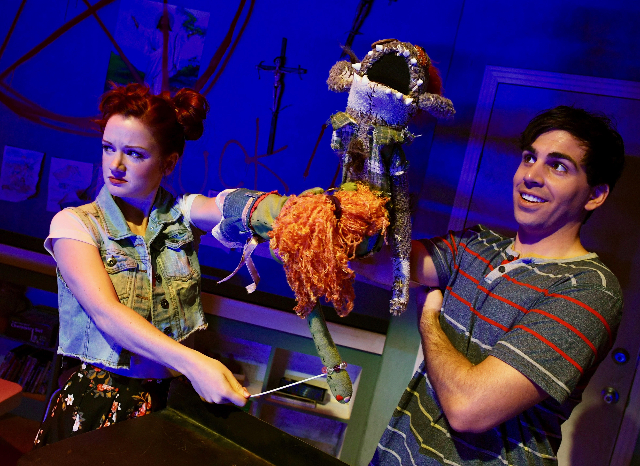 Lizzie O’Hara as Jessica with Jolene, David Colston Corris as Jason with Tyrone. 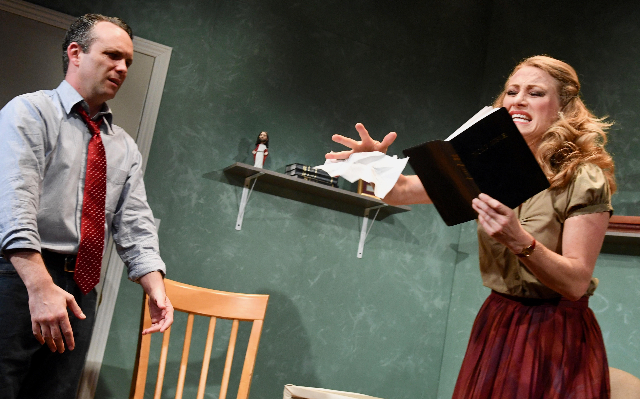 “One thing a girl loves more than a bad boy is a self-aware bad boy.” from Misadventurous by S.A. Tawks,

Okay – so it’s raunchy and raucous and ridicules religion. If none of that bothers you, prepare to find Hand to God hilarious and incredibly entertaining. But when the peels of laughter and occasional gross-outs subside, you’ll realize that its message runs quite a bit deeper than a Chinese fortune cookie. And by the way, the acting and design elements equal the superb script.

Playwright Robert Askins draws on his small town Texas upbringing in the Lutheran Church to craft this tale of perverse adults hiding behind conservative fabric and teens ill-suited to their community. We meet the six-months ago widowed Margery. Knowing of her despondence, Pastor Greg has recruited her to teach a hand puppetry class for high school aged students at the church. The students are her withdrawn son Jason, “bad boy” Timothy, and nubile Jessica, each of whom utilize their own hand puppets.

What follows is a whirlpool of character revelations and broken taboos. What is unexpected is that Jason becomes the central figure, along with his puppet, Tyrone. David Colston Corris is brilliant in these roles as the pantywaist Jason is dragged by the evil Tyrone into becoming increasingly uninhibited and volatile. Alison Ewing and Keith Pinto are great as Margery and Pastor Greg whose moral breaking points are tested by circumstances. Perhaps the most constant character is Timothy who is played with wonderful lasciviousness and irreverence by Sean Okuniewicz. Finally, Jessica is Lizzie O’Hara who excels in a masterful exhibition of puppetry in a quartet of Jason with Tyrone and Jessica with Jolene. Without giving too much away, it involves physical interaction between their two puppets that is incredibly precise and expressive, and it is carried on while the two humans are having conversation and expressing their own human emotions.

Those of us who grew up in similar environments will find much to reminisce about. Apart from some of the personalities of the place and time, the look of the set may take you back – the institutional green walls with religious-themed posters and children’s art work. In addition to an effective set, Michael Palumbo’s stunning lighting and Steve Shoenbeck’s wealth of diverse sound create a totally engaging feel.

Before rebelling against religion, playwright Askin participated in the church’s puppet ministry. It is hard to imagine that he was not influenced in developing the hand puppetry theme in Hand to God by famous predecessors, but with a twist. In Sesame Street, the puppets are the story’s characters, and puppeteers are hidden. Avenue Q required an extra level of suspension of disbelief as the puppets were the characters, but the puppeteers were exposed on stage yet were supposed to be “invisible.” In Hand to God, each puppeteer is a character, and akin to traditional ventriloquism, the puppet is also a character, often an alter ego, revealing the otherwise repressed thoughts of the operator.

What strengthens this play beyond the superficial humor and action is that it addresses important societal issues. All societies rely on rules of behavior to determine what is good and what is bad, and the presumption is that good actions will support the mores of the community, and people who do good things will succeed. However, we have only to look at American politics to see that Donald Trump has exhibited an endless catalogue of publicly revealed bad behaviors. Yet he is President of the United States, which demonstrates the potential power of bad behavior and begs the question, why act for good even if it sustains communal order? Why should we do what we should rather than what we want if the latter is more empowering?

Hand to God, by Robert Askins is produced by The Stage and plays at its theater at 490 South First Street, San Jose, CA through October 15, 2017.