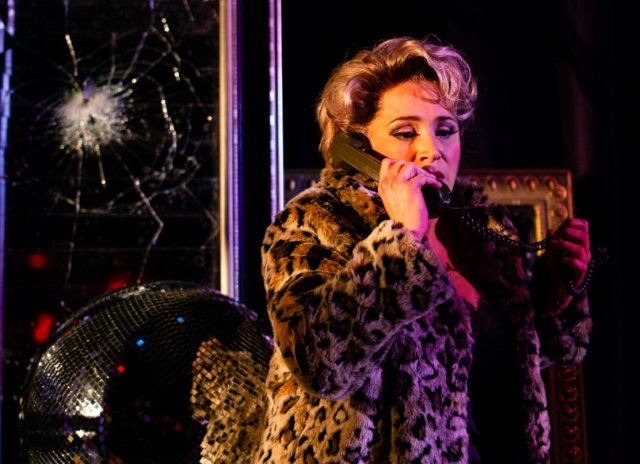 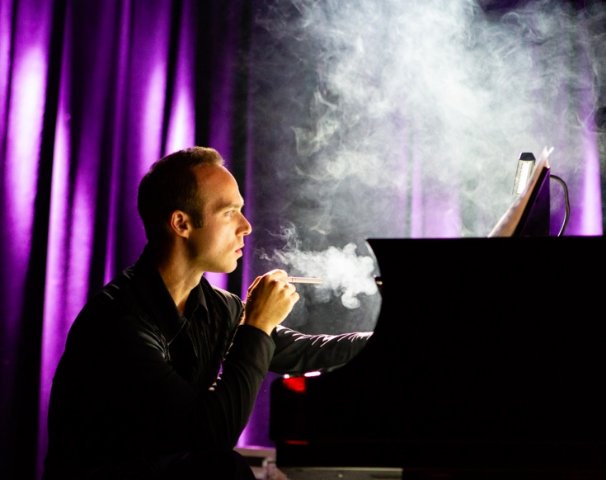 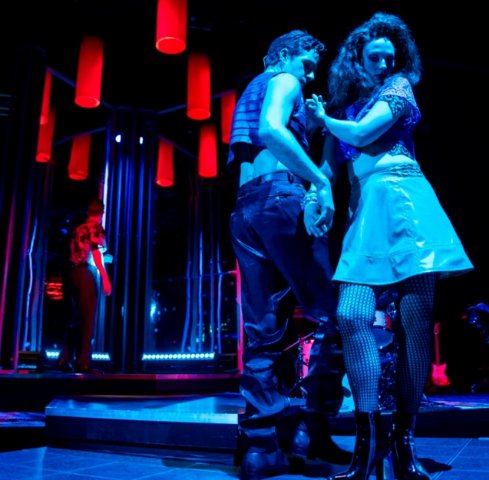 A triptych sits tall on center stage and provides a reverential area and also one for retreat. 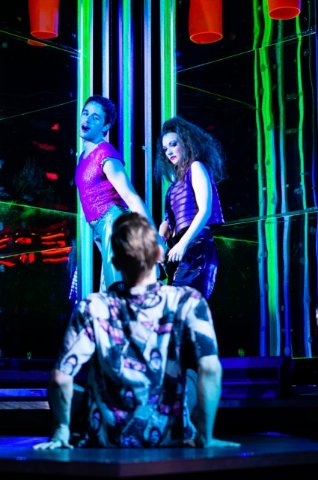 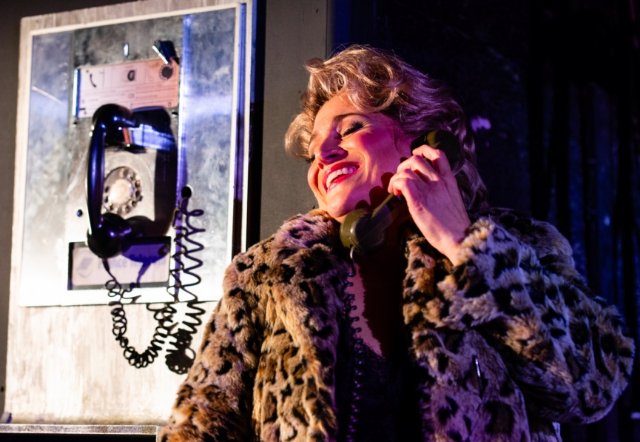 Racette speeding to a crash after her infatuation dumps her.

Ne Quittez Pas is writ large on a marquee in a hot neighborhood of Philadelphia. Hold on, it says. Don’t leave. Stay on the line. This is a phrase used repeatedly in the old French telephone service, a main character in the opera to unfold inside the club, Theater of the Living Arts, a disco/nightclub near the harbor.

The room is filled with disco lights whirling in the midst of moving spotlights of different colors. The room crackles.

A century ago in Paris a group of artists known as Les Six wandered the city’s streets looking for circuses, music halls and cabarets, venues that would prick their creativity. Art was incorporating a different class of patron.

Composer Francis Poulenc was among Les Six. His music is featured in Ne Quittez Pas. This shy man had a dark, private side. He was not comfortable with homosexuality and protected himself as best he could. His music is, in part, an expression of  indeterminate femininity and in the particular case of the adaptation of Jean Cocteau’s most performed play, La Voix Humaine, a wrenching commentary on love lost.

Director James Darrah, familiar to opera aficionados as the director of Breaking the Waves in Philadelphia,, and Flight in New York, among many other works, took up the challenge of a prequel to La Voix Humaine. All of the music is Poulenc’s in the prelude. Words are Cocteau’s and Apollonaire’s. The characters are Cocteau’s creations. They have been woven to tell an earlier story of a couple who work out their relationship in a nightclub which has just closed for the evening.

We watch a mysterious and disturbing relationship of siblings playing a dangerous, sexual game. Poulenc’s jazz-tinged harmonies and lyrical lines abound. The prelude ends with a Poulenc song cycle, lewd, earthy and bawdy at once.

Pianist Christopher Allen plays Poulenc’s music with delicacy and a sense of anticipation. The couple, Marc Bendavid as Paul and Mary Tuomanen as Elizabeth/Lise, depict a tortured relationship, seeking a feeling to follow.

After an intermission, the great Patricia Racette, bundled in a chubby fake fur coat, parades into the club as Debby Harry would. As Elle, she begins her relationship with a telephone. Many great actresses have played Elle. Ingrid Bergman said of the role, “Very moving, and the most difficult thing to do, as you are alone throughout with a mute telephone for inspiration."

While the monologue stands strongly by itself, coming from the prequel, you are already on edge and questioning. Did Elle have a relationship like the one we’ve just been part of? To director Darrah’s credit, these thoughts float in the air, but in no way interfere with the driving drama cast in wrong numbers, unanswered rings and overheard music.

Patricia Racette is a consummate singing actress. Her work has incredible detail, both in responding to musical phrases and in expressing emotions of the character she is inhabiting. She makes this curious and uncomfortable work a compelling drama.

In this production, she looks particularly lovely. As she tries desperately to speak to her now lost lover on the phone call, she is plagued by the crude French phone service. When the phone seems dead, Racette clicks the instrument. Tortured silence is broken.

Racette takes the piece’s fragmentation and powerful repetition into a trance. Her inner thoughts and private struggles are expressed in vocal idiosyncracies which sound anxious. Ellipses and question marks summon the lover. Much of the opera is sung without accompaniment. Through it all, Racette is directly human and moving.

This being an Opera Philadelphia production, it is hard not to feel, with Lucia di Lammermoor on the O18 schedule, that this piece is an extension of the mad scene from Donizetti’s opera. Elle is histrionic. Racette breaks the character open and gives us a snapshot of despair, just as Brenda Rae does at the Academy of Music as Lucia.

Cocteau’s play opened with a Surreal event. The poet Paul Eluard, accompanied by Russian filmmaker Sergei Eisenstein, yelled “Obscene! Enough!” A Cocteau supporter knocked Eluard’s hat off and then burned the back of his neck with a cigarette.

For those of us who love the over-the-topness of the opera form, the alliance of Poulenc and Cocteau triples the pleasure. Racette, Darrah and Opera Philadelphia give us a drama full of excessive, exaggerated and agonized perfection.