Shaw's Arms and the Man 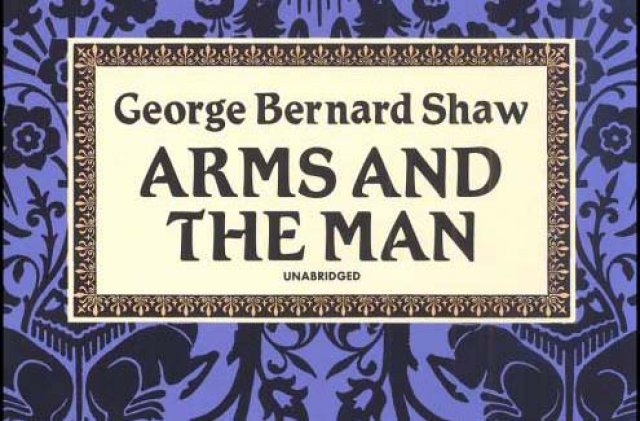 City Lit Theater’s new production of George Bernard Shaw’s 1894 play, Arms and the Man, takes full advantage of its broad humor. Perhaps Shaw’s most frothy script, director Brian Pastor directs it with panache, although he sometimes lets his cast drift into silliness. Despite that caveat, Shaw’s sly wit, his political and social attitudes and his fondness for strong female characters shine through.

Set in the home of a wealthy Bulgarian family, the story takes place during the Serbo-Bulgarian war of 1885. Raina Petkoff (Scottie Caldwell) is in her bedchamber when a Serbian soldier (actually a Swiss mercenary), Captain Bluntschli (Adam Benjamin) crawls up to the balcony and enters her room to escape the Bulgarian troops. Rather than calling for help, Raina chats with the captain and protects him from being discovered when a Bulgarian officer comes looking for a soldier seen scaling the wall of the Petkoff house. She also discovers that he keeps chocolates in his ammunition case, thus inspiring her to call him her “chocolate cream soldier.” Why chocolates? “You can always tell an old soldier from the inside of his holsters and cartridge boxes. The young ones carry pistols and cartridges; the old ones, grub.” Raina and her mother, Catherine (Eleanor Katz) help Bluntschli escape, camouflaged in Major Petkoff’s old coat.

Raina, who has a dreamy, idealized view of love and heroism, is engaged to a Bulgarian officer, Sergius Saranoff (Martin Diaz-Valdez), a man quite taken with his uniform and his own appearance. He’s celebrated for leading a sort-of-victorious cavalry charge against the Serbians that Bluntschli describes as “slinging a handful of peas against a window pane.” Saranoff and Raina’s father, Major Petkoff (a blustery, bombastic Adam Bitterman), both arrive at the Petkoff house after the battle.

When Bluntschli arrives later to return the coat (and see Raina), he is resplendent in his dress uniform and both the major and Sergius welcome him as a respected opponent. It turns out that Bluntschli personifies the Swiss attributes of precision and financial acumen. His family owns a group of luxury hotels. And he’s the only one who can help the two Bulgarian officers figure out how to get the troops home.

The Petkoffs’ two servants, Nicola (Linsey Falls) and Louka (Chelsea Carter) are another engaged pair. But Louka, an example of Shaw’s independent and spirited women, flirts with Saranoff and he succumbs to her charms. Raina and Bluntschli complete the partner switch, an old romantic story that Shaw tells with a twist. The minor incident upon which the romances hang is a photograph of herself that Raina has left in the coat pocket. She signs it “Raina, to her chocolate cream soldier—a souvenir.”

Arms and the Man is one of Shaw’s “pleasant plays” and his first commercial success. The title comes from the beginning of Virgil‘s Aeneid, “Of arms and the man I sing.” Shaw granted limited rights to use it for an adaptation as an operetta with music by Oscar Straus. The Chocolate Soldier (1906) was a huge international success. Although Shaw called it “a putrid opera bouffe,” he probably regretted his decision to accept no compensation.

Arms and the Man runs through October 21 at City Lit Theater, 1020 W. Bryn Mawr (the second floor of the Edgewater Presbyterian Church). The play runs about two hours with one intermission. Buy tickets for $32 ($12 for students, $27 for seniors) for performances Friday-Sunday.