The Agitators at Gloucester Stage 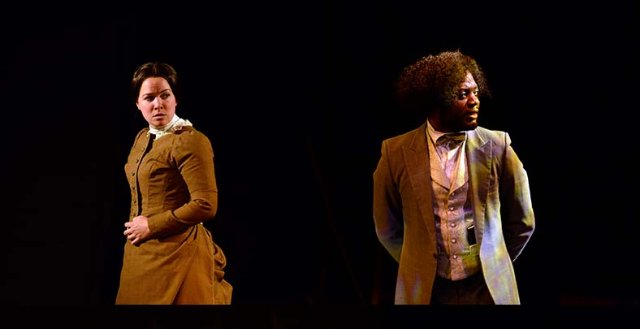 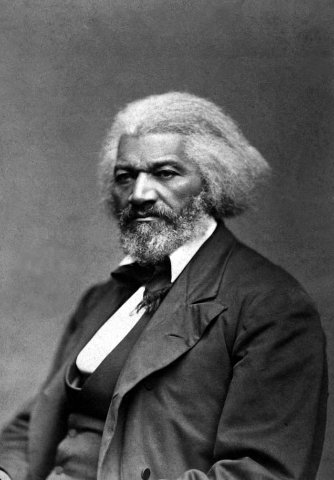 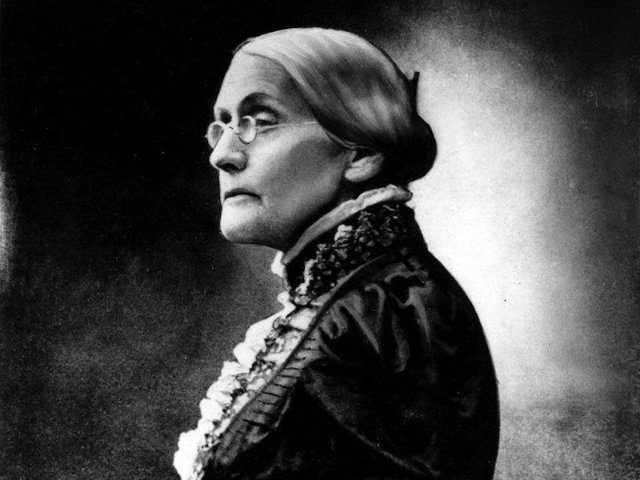 In a remarkable two hander, The Agitators, by Mat Smart, being given a compact, riveting production by Gloucester Stage Company, we learn that Susan B. Anthony (1820 to1906) and Frederick Douglass (1818 to 1895) were fellow firebrands and fast friends.

The caused of abolition and women’s suffrage kept them on the road giving some 100 annual speeches. Considering the means of travel that meant that they rarely enjoyed a home cooked meal.

Act One covers the era pre-Civil war, 1849, through Reconstruction, 1869. During Act Two they are the worse for wear from 1870 to his death in 1895. The locale shifts from Rochester, where she was raised, to Albany, Boston, New York City and a visit to the White House.

Next to Queen Victoria, Anthony, who spent her first years in Adams, Mass., was the most famous woman of the century.

Arguably,  Douglass, who fought to pass the 15th amendment which alleged to give African Americans voting rights, was the most renowned man of color of his era. He blazed a trail that many would follow.

More a fine drama than simply a documentary, through the research and writing of Smart, we learn about these advocates for social justice.

Most of us know their names but little in depth of their important work which helped shape race and gender for our still racist and sexist nation.

There were so many compromises to achieve even their limited agendas.

This is brilliantly enunciated through the superb performances and dynamic synergy of Sarah Elizabeth Bedard (Anthony) and James Ricardo Milford as Douglass.

The costumes by Marty Hurd capture the essence of the era as well as transitions of style when years pass. Kudos to an uncredited wig maker who gave Milford an uncanny resemblance to an iconic image of Douglass. He had an unique hair arrangement best described as flattened natural splaying to the side of his head. Notably, the wig for the second act revealed salt and pepper signifiers of age.

It was just such technical attention to detail that brought this drama and era to life with deft but limited nuance. The stage designed by Jeffrey Petersen was raked and rotated between scene changes by an uncredited third character. We watched with close attention as his manipulation of props was integral to the production.

This succinct stagecraft was further enhanced with compelling video vignettes by Lee Francois and sound by Dewey Dellay.

Under the direction of Jacqui Parker there was a lot to like about a truly sunning evening of theatre.

There is just the right mix of their personal and professional lives.

Douglass wrote and published his first autobiography, Narrative of the Life of Frederick Douglass, an American Slave, in 1845. The book was a best-seller in the United States and was translated into several European languages. This was twice revised and expanded.

Similarly, Anthony penned three volumes. She presents him with the latest one leather bound. Asked if he had read the others Douglass praised her introduction.

This was a nice way of indicating that despite mutual admiration they were not always in sync.

When he was pushing for the 15th Amendment she was too focused on her own cause. There was payback and estrangement when she was advocating for the 19th. To recruit some million Southern women Anthony, for the greater good, acquiesced when black women delegates were banned from an Atlanta meeting. There was no way for Douglass to endorse that.

What Smart evokes with insight and balance is that they were remarkable and flawed individuals. Dramatically that makes them ever more human and credible.

The audience wants to know if they loved each other and to what extent? What happened when their paths crossed? There is a humorous moment when they try to compare calendars for a meeting.

In the first scene Douglass plays a violin duet with his unseen wife Anna. While gifted in music she was illiterate. It was rare for those born into slavery to read and write. At 13 he was tutored by a white woman whose husband owned him. He read whatever he could find and later taught Bible classes and reading to as many as 40 fellow slaves.

He attended the Seneca Falls convention for women’s rights in 1848. Elizabeth Cady Stanton became a leader with Anthony and a lifelong friend.

His interest in women was more than platonic.

Anna Douglass remained a loyal supporter of her husband's public work. His relationships with Julia Griffiths and Ottilie Assing, two women he was professionally involved with, however, caused recurring speculation and scandals.

After Anna died, in 1882, Douglass married Helen Pitts, a white suffragist and abolitionist.

When asked in this play if she every loved anyone Anthony answered “I married the movement.”

The Town of Adams is currently planning a bronze sculpture to honor its most famous citizen.